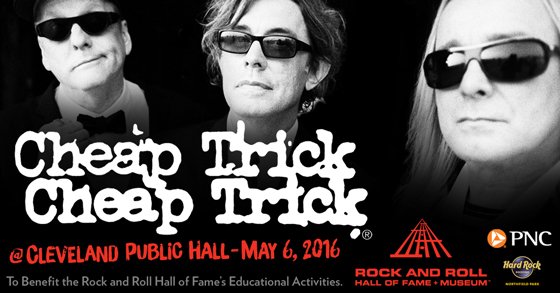 Four boys from Rockford, Illinois put out their self-titled debut album in 1977. The album didn’t chart, it failed to produce a successful single, and the critical opinion was lukewarm, at best. Fast-forward to 2015, that same band in question, Cheap Trick, found out they were receiving one of music’s highest accolades: an induction to the Rock & Roll Hall of Fame.

Much happened between ’77 and the Rock Hall nod, of course. Cheap trick released four Platinum records. Two additional were certified Gold. They found massive success with their singles “Surrender,” “I Want You to Want Me,” “Dream Police” and “The Flame.”


He echoed a few “thank yous” said by other band members before closing the night with some classic Cheap Trick tunes.

During a recent phone interview with CleveRock, Nielsen was once again short and to the point. When asked what it meant to him to be recognized by the Rock Hall, Rick simply replied, “It was a great experience. It was an honor.”

A long, awkward pause followed, and after some prodding, he continued, “Our fans were out in the audience and filled the place up. It was sold out and we got a great ovation. The only time that everyone stood up in the whole place was for us. It was an honor.”

While Cheap Trick may have been the final inductee to be honored and perform at the ceremony, fellow inductee Steve Miller stole the show with negative comments he made when meeting with members of the media immediately after he was honored, where he essentially bashed the music industry, and more specifically, the very institution honoring him that evening.  During his remarks, Miller said, “This whole industry fucking sucks and this little get-together you guys have here is like a private boys’ club and it’s a bunch of jackasses and jerks and fucking gangsters and crooks who’ve fucking stolen everything from a fucking artist.”

“I heard it probably like everybody did. I didn’t hear it until the next day,” Nielsen said of Miller’s remarks. “I saw him onstage, then we went back to talk with the people of the press and there was no press there, and we didn’t know why. The Rock and Roll Hall of Fame closed down the press room. We never got to say one thing to anybody. They didn’t tell us why.”

But what would have Nielsen and his bandmates have said to the press if Miller had not rained on the parade?

What else is there to say?

Cheap Trick will perform at the 13th annual “It’s Only Rock and Roll Spring Benefit” at Public Hall on Friday, May 6, to benefit Rock & Roll Hall of Fame’s nationally acclaimed educational programs. [Complete event and ticket information can be found RIGHT HERE] Nielsen said this will be at least the third time that Cheap Trick has performed at a Rock & Roll Hall of Fame function.

On the heels of their seventeenth studio record, ‘Bang, Zoom, Crazy… Hello’ (04.01.16; Big Machine Records), Cheap Trick will be out on the road this summer on the “Rock Hall Three for All” tour that also includes RRHOF inductees Joan Jett along with Heart. Rick said of the tour, “We’ve done it before and now we’re doing it again. It was good before, so it should be great now.”

Rick’s son, Daxx Nielsen recorded drums on the new album and will be touring with Cheap Trick this summer. When asked about how he feels to have his son touring and recording with him, channeling his inner Greg Popovich, Rick replied, “It’s exciting.”

Looking back at nearly 40 years of being in Cheap Trick, a journey that has included millions of records sold, countless sold-out tours, and an induction to the Rock and Roll Hall of Fame, Rick attributes the band’s success to hard work and loving what they do. “We never quit. We continue to go,” he said. “We liked making our first record. We liked making the last record. We’re writers and performers. We do it because we want to it. It’s what we want to do. Pretty lucky, huh?”

“Come see us play,” Nielsen added. “Even if we’re holograms.”