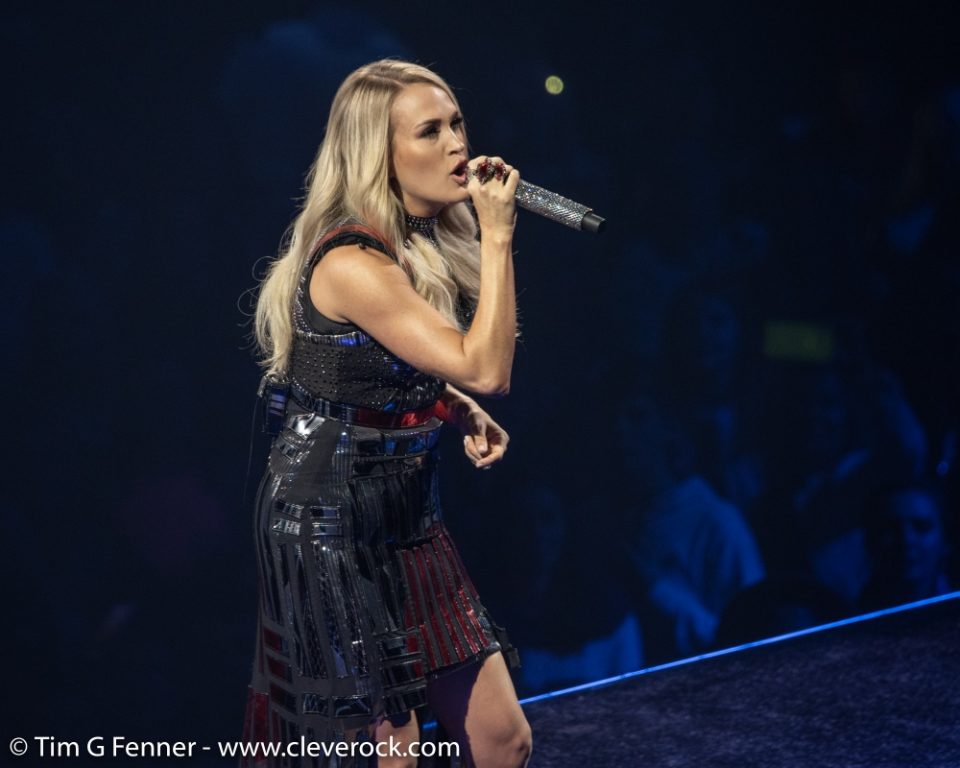 We all mistakes when we’re young(er), right?

Voting for Dubya was an error that aided him in landing four more years in the Oval Office. Luckily, my vote for Bice during the ‘American Idol’ season 4 finale did no damage, as Carrie Underwood still won by a landslide.

The runner-up made his way through North East Ohio a few years back, playing Family Days festival in suburban Streetsboro to DOZENS of mildly curious onlookers. Underwood, on the other hand, rocked a near-capacity Quicken Loans Arena last night (05.18.16) on her “Storyteller” tour to thousands upon thousands of shrieking fans. (And, when I say “shrieking,” I mean it!)

American Idol winners range from success stories that include Underwood and Kelly Clarkson to complete laughing stocks such as Taylor Hicks and Ruben Studdard, with Phillip Phillips and Scotty McCreery sandwiched in the middle. [Interesting “Where are they now?” read about AI winners]

While runner-ups and unpopular winners try to capitalize on the American Idol name, true winners from the series have done their best to distance themselves from the program’s stigma. Underwood has moved far and beyond the show to become one of the top selling country artists of the past decade, but still took time out during her 22-song set to thank her fans who watched and voted for her on the show, sounding sincere while doing so.

Underwood opened her show with “Renegade Runaway” from her 2015 release, ‘Storyteller,’ drawing screams from the primarily female audience. This was followed up by a medley of “Last Name” and “Somethin’ Bad.”

“Last Name,” a walk-of-shame themed one-night-stand anthem, was followed later in the set by “What I Never Knew I Always Wanted” (a song about welcoming her son into her family) and “Before He Cheats.” — If placed in the correct order, Carrie might possibly have the first-ever country music rock opera headed to Broadway.

About a third of the way through her set, Underwood belted out her first post-Idol single, “Jesus Take the Wheel,” which she called one of her favorite songs to play. As the end of the song neared, Carrie shut her eyes, raised one hand in the air and titled her head toward the heavens.

Another set highlight was a cover of Dolly Parton’s “I Will Always Love You.” Carrie began singing a cappella, shortly after, was joined by a piano and eventually, the rest of her band. The fans attempted to sing along and belt out the high notes, setting a world record for ‘Worst Noise EVER.’

Underwood made very few mistakes on the evening. On the surface, she’s made very few mistakes in the public eye (save dating Dallas Cowboys’ quarterback Tony Romo). One thing Carrie definitely did not make a mistake on was her stellar harmonica playing, where she dueled with one of her band members (and won, hands down).

Opening acts Easton Corbin and Swon Brothers joined Carrie onstage for a fun rendition of “Fishing in the Dark” (a Nitty Gritty Dirt Band cover), which had a fun, hillbilly feel to it.

Apparently, the vast majority of women in the audience have, at some point, been a victim of a former partner’s infidelity, as they screamed their lungs out (seemingly relating to) “Before He Cheats,” to close the set. Certainly, more than a handful of fans in attendance have, at one point, keyed an ex’s car, slashed their tires, or took a baseball bat to a headlight.

The country music start returned for a two-song encore, “Smoke Break” and “Something in the Water,” before taking her final bow and disappearing from the stage.

This was definitely not bros’ night out. Gals might say to one each other, “OMG, we need to see Luke Bryan. He is SO. HOT.” Never will a man ever say to his buddy, “Dude, let’s go see Halestorm. That Lzzy chick is gorgeous.” It just doesn’t work that way.

But for the men who were brought to the show as a date, the show was equally enjoyable. Country music is not gender-specific, no matter who is singing or who is listening. Even this male writer surrendered his man card to toe-tap and sing along to a few tunes.

While the indoor venue and urban location eliminated country music show traditions of lawn games and over indulgence of adult beverages, taking away some of the show’s fun, what lacked in atmosphere was made up for in performance.