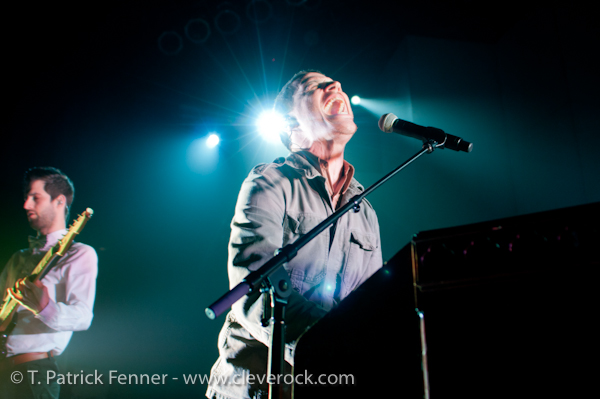 After wowing Cleveland with a dynamite headlining show at House of Blues this past spring, MUTEMATH will return to town on June 8 to support Twenty One Pilots at the Wolstein Center.

MUTEMATH is gearing up to kick off their support role in the coming days after wrapping up their tour for their most recent album, ‘Vitals,’ which was released in November of 2015 after a long and challenging recording process.

“It’s unbelievable. I’m still pinching myself. This is quite an opportunity for us,” lead singer Paul Meany said of the upcoming tour in a recent phone interview.  “It was a very good day, the day we got the news. We’re lucky to be a part of that show. I’m a huge Twenty One Pilots fan. I absolutely adore what those guys do. The chance to be part of this colossal tour is very exciting for me.”

The opportunity to play for thousands of people that may not already be familiar with the band is not without its challenges, but Paul feels that the lack of pressure and expectations outweighs the battle to win over new fans. “Nobody is there to see you. It feels like you get to shake the Etch A Sketch and be a brand new band to a group of people,” Meany said. ‘That’s really inspiring for us, especially since the band has been around for ten years. It’s a chance to feel new again.”

MUTEMATH has one of the most energetic and creative live shows on the touring circuit today. This is a claim bestowed upon many bands, but MUTEMATH actually substantiates it not only with their passionate energy, but their outside-the-box creativity as well. In a recent tours, Meany floated atop of the crowd in an inflatable raft. On the ‘Vitals’ tour, drummer Darren King passed out gloves loaded with electronic drum triggers to audience members near the stage; then he passed out high fives. [See vide below]

“Darren was getting a little bit bored with it so we just put these drum triggers in some gloves and just gave them to the audience and just gave a bunch of high fives out,” Meany said laughing. “We threw it out there, just assuming it might be another bad idea, but it stopped us all in our tracks and said, ‘Whoa, that mind be kind of fun, actually. Let’s see if we can pull that off.”

As for if the band will be able to pull these stunts off on a bigger stage in a shorter set, Meany said:

“We will have all of that fun stuff waiting in the wings. I think when you go out on a tour like this with a fresh audience, we’re going to be having a revolving set, trying to figure out what our best set 40 minute set is from night to night. We’ll try this, we’ll try that, there’s a lot of audibles to be called. We’ll have everything at bay, ready to pull from, and we’ll see.”

Being on the road with a grueling schedule can take its toll. How does MUTEMATH keep up their passion levels every single night?

“Well we generally love what we do. It’s the truth,” Meany explained. “Every time we start striking up the songs in front of an audience, we feel really lucky that we get to do that in the first place. The synergy of the audience responding, and the ability to pull from this passion that we have to make music and perform it, it’s fun to be in the room where that energy begins to spill out to the audience. That feeling of connection and sharing it with that room of people. But we’re grateful for that.”