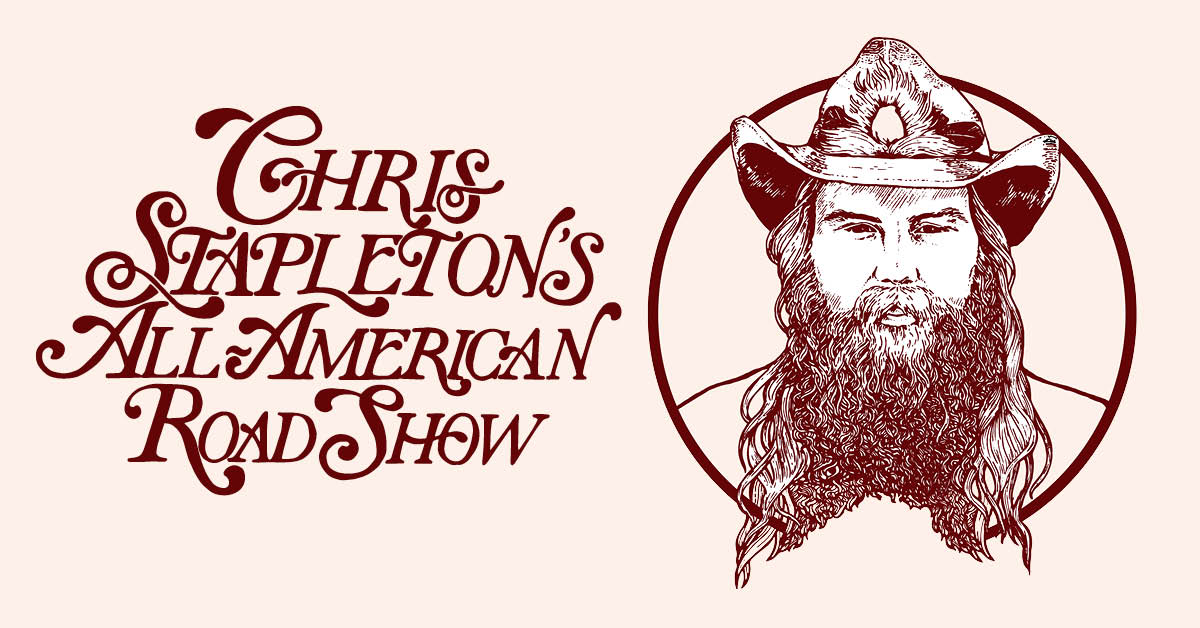 So much has changed during the pandemic!

All of the above (save for Blossom traffic) made a recipe for what inevitably turned out to be a great first night back for this writer amongst the masses. It took a minute of hesitation and claustrophobic-like feelings crossing the security bridge prior to the entrance, but after that, navigating crowds, avoiding bumping into people, dodging cigarette smoke and beer splashes all came back just like riding a bike!

Chris Stapleton is the man of the hour that everyone has come out to see. Perhaps despite the crew’s best efforts, a tad bit of daylight lingered as Stapleton strolled onstage to the tune of The Band’s “Up on Cripple Creek.” Armed only with an electric guitar and his band still stowed away backstage, Stapleton kicked off his 25-song show with “Whiskey and You” from his 2015 album, ‘Traveller.’

The Kentucky native’s lack of flashy entrance, absence of tight leather pants and backwards ball cap, and armed with just a guitar and a mic, are just three examples of why Stapleton gives traditional country fans hope that “REAL” country isn’t dead. No disrespect to the Big & Riches or Luke Bryans who, don’t get it twisted, have phenomenally entertaining and energetic live shows (which is never to be discounted), but the reliance on pop-friendly radio sound and stage theatrics detract from what makes country music, country music. Stapleton is a refreshing hope that the genre our parents and grandparents loved will persevere.

His backing band, which includes his beautiful wife, Morgane on tambourine and backing vocals as well as famed-producer Dave Cobb (who produced the six-million-copy-selling soundtrack for A Star is Born as well as acclaimed records for the likes of Jason Isbell, Dawes, and even Northeast Ohio native Suzanne Santo) on guitar, were an excellent compliment to Stapleton as they joined him for the second of the set, “Nobody to Blame.”

Stapleton’s soulful, bluesy voice can, in this reviewer’s opinion, only be likened to that of the gold voice of Marc Broussard. (Look him up if you are unfamiliar. “You’re Welcome!”) His hair and bead one-up the great Waylon Jennings in his prime.

It has been said man-a-time that “behind every great man is a great woman.” 99% likely this is true in Stapleton’s case. The love he has for his wife shone through on this night. Maybe Chris is shy, maybe the stage lights were blinding his eyes, or, perhaps, with his wife onstage, he didn’t want to get smacked for allegedly looking at the cute blonde in the front row; no, his eyes were locked on Morgane more than the sold-out crowd at Blossom tonight. On the way home, my wife commented, “Find a way to look at you the way Chris looks at Morgane and you’ll never feel unappreciated” as she stared at me like she was offering a hint. (Year of marriage has taught me to simply let this go.)

As Stapleton performed the first of four covers on the evening, “Millionaire,” by Kevin Welch, he gazed at his bride as he sincerely sang:

Literally and figuratively it seems. With five Grammy Awards, sold-out amphitheater shows, songwriter credits for the most established artists across the genre, and platinum records on his wall, the 43-year-old is deservedly seeing the fruits of his labors.

Roughly halfway through the set, Stapleton gave most of his band a bathroom break as he grabbed an acoustic guitar. All by his lonesome, he performed “Maggie’s Song,” with the wife, tugging on the heartstrings of any loyal pup owner as he chronicled the life and eventual death of a family dog. “And she loved to chase squirrels / And playing out in the snow / She’d take off like a bullet / Man, you should have seen her go,” brought smiles, followed by tears as the song turned to “She put her head on my hand / Like she’d done so many times / I told her she was a good dog / Then I told her goodbye.”

For this reviewer, “You Should Probable Leave” and the back-to-back “Sometimes I Cry” and “Might as Well Get Stoned” were highlights on the evening.

During the set closing “Tennessee Whiskey” (penned by Northeast Ohio native David Allen Coe), Stapleton sang nods to Cobb, his wife, and the other members of his band (whose names I failed to catch with being so lost in the moment.) Despite nearly 90-minutes of music up to this point, the audience was still a pinch shy of sated.

That was rectified minutes later.

Stapleton returned for a two-song encore that included “Traveller” and the fan-favorite “Outlaw State of Mind.”