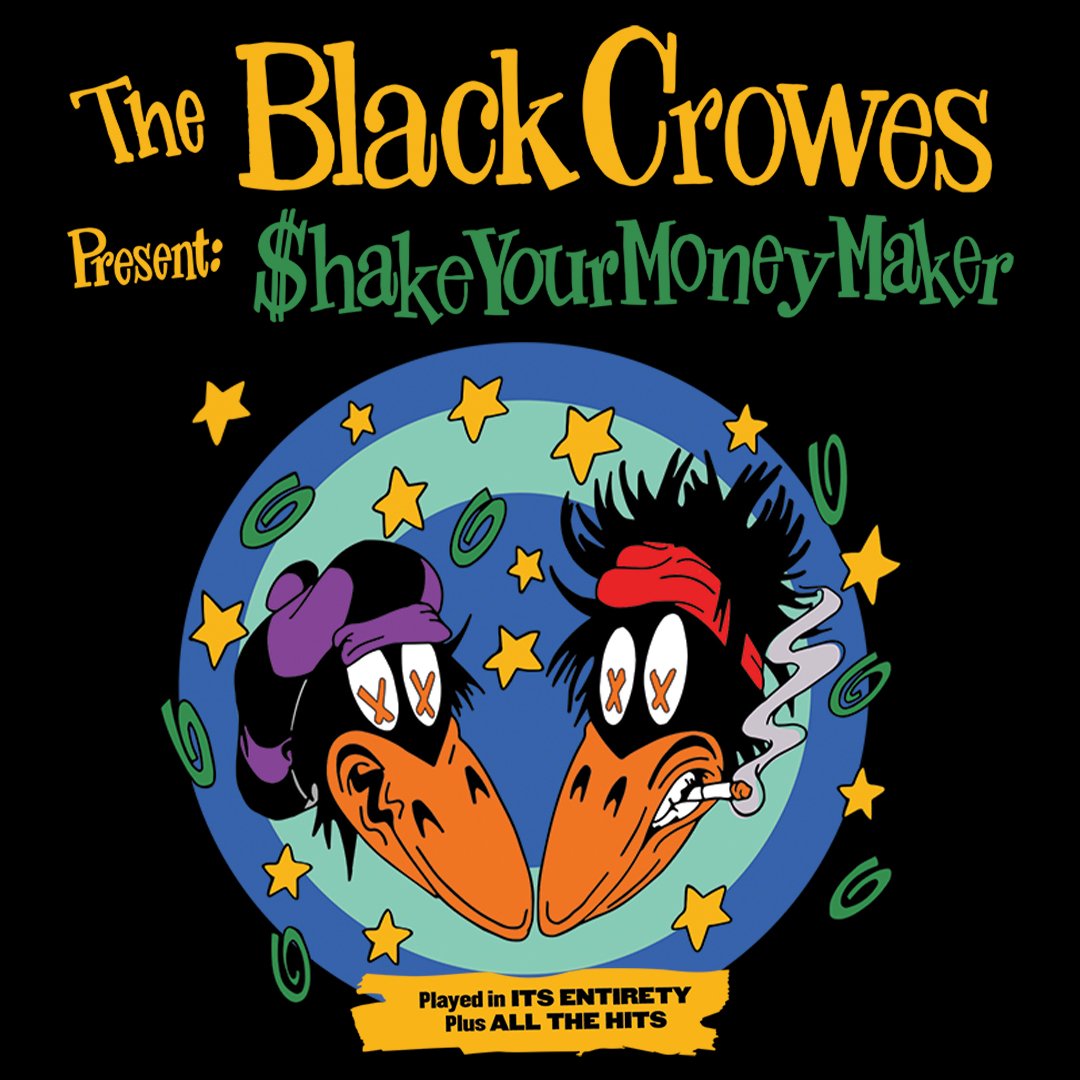 Brothers Chris and Rich Robinson finally had the chance to take the stage in Northeast Ohio to celebrate the 30th anniversary (in the 31st year, thanks to the pandemic) of their smash debut album, ‘Shake Your Money Maker,’ at a show doubling as celebration for the return of live music in front of a giddy crowd at Blossom Music Center on August 4.

The Black Crowes released said album in February of 1990 and it remains their best-selling record to date,having been certified 5x Platinum The album takes its name from the classic blues song by Elmore James and serves as a bit of a disclaimer for what you were going to listen to, similar to the purpose of the low, trailing camera shot of Chris walking in cowboy boots at the beginning of the video for the single “Jealous Again”

The album consists of 10 tight southern, bluesy rock & roll songs released. after we had just closed the book on the synth-heavy 1980’s and a couple of years before Grunge would emerge to cover us in flannel and angst. The Crowes’ debut firmly planted a flag in a genre whose royalty had done their best work well over a decade prior to.

Money Maker never bothered to check the pulse of the current music trends and proceeded to churn out hit after hit. Thirty-one years later, it is time to revisit the album live, from beginning to end!

When the lights go down, the crowd sees the stage has transformed into a bar room. A woman walks over to a classic Wurlitzer-style jukebox, puts a coin in, and plays the previously-mentioned Elmore James song.

The spotlight focuses on the lit-up jukebox as the band members take the stage. Midway through the song, Rich Robinson interrupts with the opening chords of “Twice as Hard” to an enormous cheer from the crowd.

As the rest of the band kicks into the song, Chris Robinson stands up from sitting on the drum riser with an open umbrella he had been hiding behind emblazoned with their mascot cartoon crows. Another cheer from the crowd surges as they see him and he struts across the stage spinning and pumping the umbrella up and down matching the beat.

The biggest, and possibly only, complaint of the evening emerges during “Jealous Again” as Chris’ microphone completely cuts out during the third verse. Unfortunately, poor sound would be a recurring theme throughout the evening.

Album song orders and concert song lists are typically built differently. Going in order frontloads the show with two of the Crowes’ prominent tracks from the album. Personally, I’m a big fan of these types of concerts where albums are played in order. Sure, you lose the anticipation of not being sure what they’ll play next, but you gain the anticipation of hearing a live rendition of an exact list of songs you’ve listened to over and over in more intimate and personal moments. Not to mention, it’s likely the last chance to ever see more obscure songs in concert.

Any great album needs solid, not-released-for-radio play tracks to hold it all together, and I’ve always loved the combo of “Could I’ve Been So Blind”/”Seeing Things” in the middle of the record for that reason.

Before “Hard to Handle,” Chris takes a moment to thank the person that wrote the song, Otis Redding. “This one is for the Big O. You know what fucking song this is.”

Chris’ white jacket comes off in between songs and we witness the full glory of his pink paisley-patterned pants under his black shirt. Reports from people sitting in the lawn at Blossom were that it appeared he didn’t have any pants on at all, but from my section of the pavilion (that I had nearly all to myself except for maybe 10-20 others), I can confirm pants were worn. Pants that possibly only Robinson, and maybe Prince (back in the day), could get away with.

As raucous as “Thick ‘n’ Thin” is, I always wished it was just a little bit longer. Seeing it live, I still feel the same way. Chris has said in interviews that they crashed a real car for the beginning of the studio track and it was one of the highlights of the recording process.

The crowd comes alive as they recognize “She Talks to Angels.” Any lingering doubts about whether Chris still had the vocal chops after all these years were extinguished as he belted out their best-known ballad.

“It wouldn’t be a rock & roll show without a little struttin’!” Chris says as Rich straps on a badass-looking Gibson Firebird and they launch into what this writer thinks is their best driving song, “Struttin’ Blues.” It’s the kind of song that will make you go 10 miles per hour faster without noticing as it plays in the car. It’s possibly even better live. A beefy guitar solo closes the song and it feels like the peak amount of energy I’ve seen from the band so far.

The back-up singers are fully engaged as they close out the album portion of the show with “Stare It Cold.” New touring lead guitarist Isaiah Mitchell worked over the slide guitar while the backing vocalists asked you “Don’t you want to feel it?”.

The anniversary tour has been throwing several of their other hits in after they complete the album. As has been the case with most of the shows on the tour, the first post-Maker track is “No Speak No Slave.”

Next, they double-dip from the album By Your Side with “HorseHead” followed by the title-track.

I always expect a bigger reaction from crowds when Rich plays the opening of “Soul Singing.” It’s such a fun song and you’ll never convince me that “Lions” isn’t their most underappreciated album.

The brothers sound great singing the verses of “Wiser Time” together. The band trades solos towards the end of the song: first Robinow on organ, Mitchell on guitar, and then the first solo of the night from Rich. The studio track is very good, but “Wiser Time” is one of the standouts that hit much harder in concert.

Chris finally gets around to introducing the band. In addition to Chris, Rich, Mitchell, and Robinow, Sven Pipien is on bass and Raj Ojha plays the drums.

A trio of hits from the equally excellent ‘The Southern Harmony and Musical Companion’ finish the pre-encore show. Chris breaks out the harmonica for an extended solo during a “Thorn in My Pride” that stretched over six minutes.

If we’re talking about live versions that hit harder than studio cuts, I can’t not mention “Sting Me.” The back-and-forth between Chris and the back-up singers during the verses is infectious. Rich takes the solo after the first verse with a beautiful candy red Gibson.

The crowd-pleasing “Remedy” is a fitting closer for any Black Crowes show over the last 29 years since they released the song, regardless of the tour.

There’s a short intermission before the band re-emerges on stage to end the evening with a cover of the Rolling Stones’ “It’s Only Rock ‘n’ Roll (but I Like It).”

I first saw the Black Crowes over 25 years ago in this very same place. It was one of those experiences where the live show instantly increases your appreciation of the band. 2.5 decades later, Rich is as stoic on stage as ever, Chris bounces and struts with as much energy as ever, and a Black Crowes show is just as much as much fun now as it was the first time.