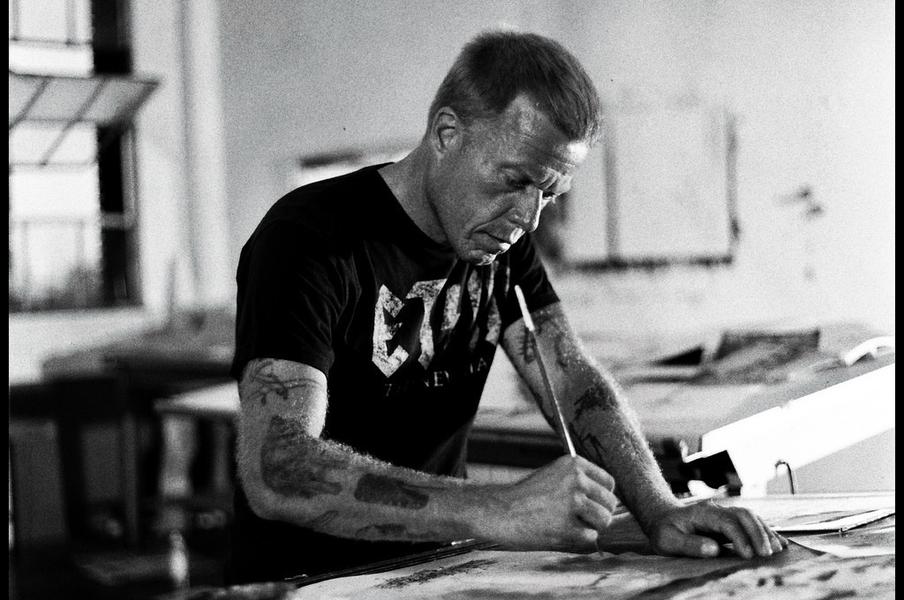 Renowned Cleveland-based illustration master Derek Hess’ artwork has been featured on posters for legendary music groups including Pink Floyd, Pantera, and Pearl Jam. In addition, his work can be seen on album covers for the likes of Motion City Soundtrack and Unearth.

The son of a World War II veteran and former student of Cleveland Institue of Art began his career as a designer of promotional flyers for concerts at the Euclid Tavern, where he also served as the booking agent. Among many other places, Hess’ artwork is featured in the Rock and Roll Hall of Fame and the infamous Louvre in Paris, who both have his art in their permanent collection.

Derek is also a strong advocate for mental health awareness. He chronicled his battle with his dual diagnosis of bipolar disorder and substance abuse in the 2016 film, Forced Perspective.

Hess is set to release a book of drawings titled 31 DAYS IN MAY: A VISUAL JOURNEY next month to coincide with Mental Health Awareness Month. In 2017, Derek posted a new drawing each day during the month of May on his Facebook and Instagram pages. Each image, in some way, shape, or form depicted something to do with mental illness.

“I would describe what the image was about and how it reflected my mental health issues and mental health in general. It got a huge response from people,” Hess explained in a recent phone interview with CleveRock.com. “People were saying ‘thank you for doing this’ and ‘I feel the same way’; so on and so forth. It got a huge, positive response that people who may be suffering from mental illness and/or had a loved one or close friend.”

This approach was somewhat different for Derek. “I normally don’t post descriptions of my pieces of art,” he said. “It’s not that I don’t want to talk to people about it; I just never do.”

“Since the response was so huge, my business manager, Marty Geramita and I said ‘let’s put a book out.’ The idea was to put together every image I posted for May and put it together in a book; release it in May, and call it 31 DAYS IN MAY,” he explained. “That’s how the book came about.”

Hess will tour throughout the month of May, holding book signings and, in select markets, screenings of Forced Perspective, as well as a question and answer session. Hess and Geramita turned to Gofundme.com to finance the endeavors.

“I said, ‘Oh, that will be a great success‘ — sarcastically.”

The support, while not yet at its goal, has been overwhelming and has far exceeded Hess’ expectations.

“I’m blown away by it. Marty set the bar at $25,000. I said, ‘even greater success!” Derek said with a laugh. “I would have thought maybe a few thousand at best. The amount that we’ve raised so far is super flattering and humbling that people are being that generous about this cause. It speaks volumes, and, again, it’s the right time to be talking about these kinds of issues, socially and culturally.

31 DAYS IN MAY includes a foreword from Doctor Joseph Calabrese, director of Mood Disorders Program at University Hospitals Cleveland Medical Center and professor of Psychiatry at Case Western Reserve School of Medicine. Hess has seen Calabrese for treatment, who has been involved in several of his efforts to raise awareness of mental health issues and surrounding stigma.

“I am very, very, happy that he was interested and did the foreword. It gave it all that much more credibility.  The mental issues that he works with and has been working with forever just helps to legitimize my work as well,” Hess stated. “It was a good avenue to go down in terms of telling my story. To have him behind me as well has been huge.”

Click here to contribute to 31 DAYS IN MAY GOFUNDME

Derek attributes his own artwork is an integral part of his own recovery. “It definitely helps. I wasn’t really aware of how much of the artwork was being therapeutic until I got into therapy and realized that I had kind of given myself therapy all along,” he explains. “By sharing the images with a therapist, it definitely helped open my mind to what I’m trying to say with what the images are.”

Plenty of experts in the mental health field, public figures, and persons with lived experience hold speaking engagements and the like at mental health facilities, NAMI (National Alliance on Mental Illness) sponsored events, and other traditional settings. Hess is taking a different approach to his tour in search of a different audience.

“I’m taking it to tattoo shops and galleries and whatnot. A lot of tattoo artists and people with tattoos like my artwork. By bringing it into that venue, it’s definitely tapping into people that might not be comfortable with the mental issues, and this might be a good way to open them up instead of just speaking at a mental health facility because people are already there doing it,” he explains. “This way, my artwork is a vehicle that touches more people because of the initial fanbase as it is. I can kind of capitalize on that by bringing awareness to someone that might not be comfortable with that.”

“Initially, it was all going to book signings but some of the venues expressed interest in showing the film. The movie is a couple years old, but it will be new to these venues,” he said. “We thought the film had run its course, but it is still definitely relevant and people are interested in seeing it. It’s included in the package that I’m doing if there is interest in it.”

Naturally, a hometown date is on the books. Hosted at his own Derek Hess Gallery, the event is scheduled for May 18 from 5:00 PM until 9:00 PM. {DETAILS ON OUR EVENTS CALENDAR}

Derek’s goal for his efforts and advocacy of mental health awareness is a simple one:

In addition to Forced Perspective and 31 DAYS IN MAY, another huge effort came with Acting Out! Hosted right here in Cleveland in September of 2017, the four-day arts festival to raise awareness for mental health and addiction featured a variety of art, speakers, comedians, and concluded with a concert by Andrew WK.

Derek’s reasons for being a vocal supporter, an open book (literally and figuratively) when it comes to sharing his own recovery story, and all-around advocate comes from his desire to stomp out stigma.

“I think that’s the way to go about bringing awareness to it. You can have people who do not have a profile socially or culturally and they can talk about it all they like. But, when you have a profile, it’s quicker to bring attention to the problem,” he said. “I think the Mariah Carey thing speak out this is great. Kevin Love, talking about his panic attacks, too, is a great thing. Those guys, given how huge they are, really get the coverage. I’m like a minimum wage celebrity here. I can get some interest in my work through my fans, but the higher the profile, the better it is for them to speak out about it. Also, a lot of people don’t realize that celebrities and big stars have these issues and they can reach a huge segment of the population that I can’t touch and a lot of other people can’t touch. I think it’s really great that it’s going on right now.”

“I feel very humbled and blessed that I’m able to help the cause out of removing the stigma of mental illness,” Hess said. “The best way I can do that is through my artwork. It’s definitely where I’m coming from on that.”