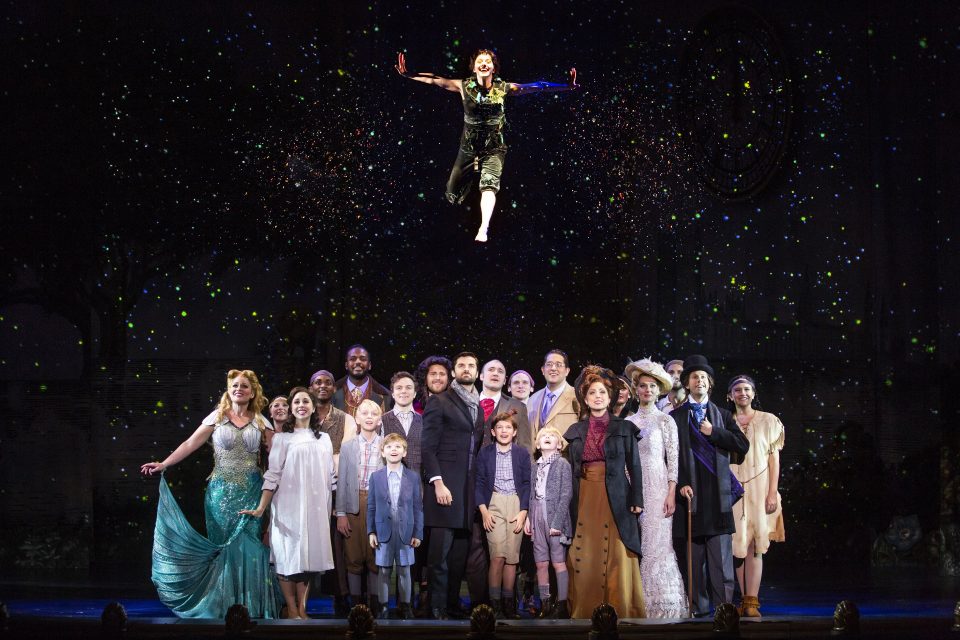 The touring company of the Broadway hit musical Finding Neverland graced the stage of EJ Thomas Hall, in Akron, OH for a limited engagement March 5 and 6.

Jeff Sullivan stars as J.M. Barrie, a Scottish-born, London-based playwright, living in a loveless marriage to Mary Barrie (Ashley Edler). Barrie is under pressure by his producer, Charles Frohman (Conor McGiffin), to create a new play, and has found that his creative well has run dry.

His ideas for a new play has only minor changes from his previous plays that have “played” out too many times. Finding something new and outside of the ordinary London melodrama would prove to be a tough sell to his producer, cast, and investors.

As fate would have it, Barrie, along with his St. Bernard, Porthos, are walking through his favorite place, Kensington Gardens. With the help of his dog and a bit of luck he meets a charming young widow, Sylvia Llewelyn Davies (Ruby Gibbs) and her four sons; Jack, George, Michael, Peter (Brody Bett, Seth Erdley, Paul Schoeller, Caleb Reese Paul, Ethan Stokes, and Josiah Smothers). Barry is immediately distracted from his own thoughts and drawn into and fascinated by their world of make believe that they are playing out in the park. This begins his journey to find his life’s purpose and to create the island of Neverland, with Peter Pan, Wendy, pirates, Indians, mermaids, and the Lost Boys.

Act I moves quickly through the story with many musical numbers, some are melodic and sentimental and some are energetic and whimsical. The music is well performed and captures the atmosphere of each scene. There are several songs that stand out in Act 1 including “All That Matters,”  “Circus of Your Mind,” “Stronger,” and “Hook.”

Barrie spends more and more time growing closer to Sylvia and her sons.  Despite the disapproval of Sylvia’s mother, Mrs. du Maurier (Emmanuelle Zeesman), a love between Barrie and Sylvia is developing into a passionate romance.

A play is also developing and is inspired after the eldest son, Peter, who is saddened by the death of his father has put aside childish play. Barrie is helping him to become a kid again and creates a “fairy play” about a boy who wouldn’t’ grow up. Captain Hook (Conor McGiffin pulls double-duty with this role, too) is the exception in the play where an adult “Hook” is allowed and portrays the dark side of being an adult. Barrie names the “fairy play’s” main character after her son, Peter, to inspire his boyhood to return. Peppered throughout the play there are the characters Mr. Henshaw (Joshua William Green) and Mr. Cromer, both whose flamboyant mannerisms and exaggerated humor capture the audience with much delight.

In Act II, the story quickly turns to serious matters as it becomes apparent that Sylvia is not well and may not recover. Barrie presents his play in the home of Sylvia so that she can watch it from her sick bed. The music in Act II is more intense and poignant as it brings the “fairy play” to life. The theatrics present a beautiful swirl of stars for Sylvia to exit this world. It is a lovely scene that was created with imagination, beauty, integrity for the moment.

Sylvia’s mother has finally come to terms with Barrie’s dedication to her family and accepts him as being a part of the boys lives until they depart to Neverland themselves.

The musical is based in part on J. M. Barries 1904 “Peter Pan”, or “The Boy Who Wouldn’t Grow Up.”  The playwright that brought this to the stage is James Graham.  Music and lyrics are by Gary Barlow and Grammy® winner Eliot Kennedy. The musical is directed by Tony® winner Diane Paulus.

The dancing is choreographed by Mia Michales and is performed flawlessly by the ensemble team. Their expressive movements lend to the theatrics of the play and pull you into the moment. The stage is set with exceptional theatrics with a variety of mediums, from skies filled with stars, stormy seas with digital projections and of course, pixie dust.

Finding Neverland was a wonderful musical that captivated its audience from the beginning. Productions made up of such a young cast could be easy to fall short, yet the young performers were the anchors of the play. Playhouse Square being able to bring Broadway to Akron is just another way we are so fortunate in Northeast Ohio.

Don’t forget to check out the Broadway in Cleveland series happening now and the 2019-2020 Broadway series, just released!