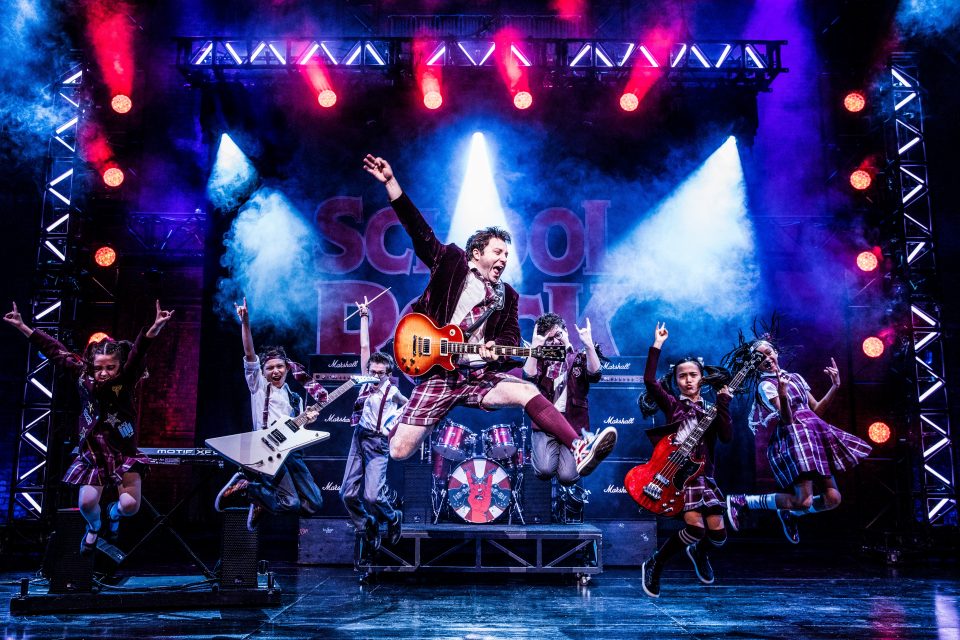 It has been 16 years since the film School of Rock came out in theaters.  Like him? Hate him? It doesn’t matter. Jack Black leaves a memorable performance as the wannabe rock star turned substitute teacher as the lead actor in the film.

But Black wasn’t the true star of School of Rock. The true stars were the kids!  Each child in the movie learned and played their instruments for the film, which ed it to uber-impressive status.

Andrew Lloyd Webber, the mastermind behind Jesus Christ Superstar, Phantom of the Opera, and Cats (all three shows with upcoming scheduled performances at Playhouse Square), is not the most assuming choice to write a musical that is, in large part, a rock concert. Adding to his legacy, his addition of 12 original compositions showcases his versatility.

Before curtain, an audio recording from the legendary composer himself plays:

“Hello, this is Andrew Lloyd Webber. The question I get asked most about this show is, ‘Do the kids REALLY play those instruments? The answer is an emphatic, ‘Yes, they do.’”

This announcement proved vital. Most in the audience would assume that the performances from the pre-teens were pre-recorded or piped in. Though accompanied by an impressively talented pit orchestra, unfortunately for those below stage level, they play second fiddle to the rockin’ lads on the stage.

At least one-third of all Broadway shows adapted from other mediums are awkward, forced, and to put it bluntly, LAME! School of Rock is none of these things. In fact, this show is perhaps better suited for a live ‘concert’ experience as opposed to the silver screen.

School of Rock – The Musical closely follows the plot of the film.  Our protagonist, Dewey Finn (Gary Trainor) is a fluttering musician trying to find his place after being fired by his former band. Down on his luck and penniless, Finn is running out of options to make rent.  His roommate, Ned Schneebly (Layne (making his national tour debut and formerly a performer at Ohio’s Weathervane Theatre)), a respected substitute teacher, happens to not be home when Finn answers a phone call from Horace Green Prep School looking for Schneebly.  The slick Finn realizes that he might be able to make rent after all if he can pass himself off as Ned! (Warning: Don’t try this at home, kids!)

Having never taught before,  Dewey has no idea what to do or how he’s going to make it through his short-term hiring.  After hearing his students in music class, he devises a plan to turn these kids into members of his new band!  Now, Dewey is going to teach Rock to these kids with the goal of winning the $10,000 prize in a battle of the bands, with the motive of solving his cashflow problems.

Rock School is in session from that point on.  Directed by Laurence Connor and choreographed by JoAnn M. Hunter, School of Rock – The Musical is a nonstop rock concert through and through.

What’s unique about this performance is that the child actors in elementary or middle school perform for everyone in the Connor Palace Theatre like they are bonified pros.

Scenic design was done by Anna Louizos, who has been nominated for numerous Tony Awards. After seeing School of Rock it is clear why.  The dynamic set for the show is almost a character in itself. The set features two stacks of oversized amps, a BIG drum kit, and set pieces are constantly zigging and zagging about the stage while desks are sliding into-then-out-of sight. Lighting director Natasha Katz transforms appropriate scenes to be par for the course of an arena rock concert.

But, gosh darn it, I’ll say it again: The youngsters stole the show! The powerful vocals of Camille De La Cruz, who plays Tomika, could turn her into the next Camila Cabello with just a tad more voice maturation. This young lady has some serious pipes. Katie (Leanne Parks), though just a tiny kid, sure played big-time bass. The nerdy Lawrence (Julian Brescia) tickled the heck out of the ivory. The kiddos not only could sing, dance, and play their respective but also were convincing actors/actresses as well. These rising young stars have a bright future in whatever path they choose next on their performing journey.

The pit orchestra played flawless rhythm backing to the children’s solos on numbers like “You’re In the Band.” Other highlights from the performance include “If You Would Only Listen” and “Stick It to the Man.”

And, let’s not leave out Gary Trainor’s performance. It is not a stretch of any kind to say that not only did he do Jack Black’s performance justice, but some might also leave the theatre and ask themselves “Jack who?”

Why should one spend precious entertainment dollars to see School of Rock? Is it the impressive stage and set that pivots and spins while flying in and out?  Partly.  Perhaps the 11 in the 9-12-year-old range that can play their instruments, sing, dance, carry the show all culminating in a full-scale rock concert performance completed with costumes, fog machines, and hairdos?  Absolutely!

School of Rock – The Musical is bound to win over the hearts of everyone takes in the show.  Fans of the film will not be disappointed, but even if this is your first experience with the story, it will ‘wow’ you equally.