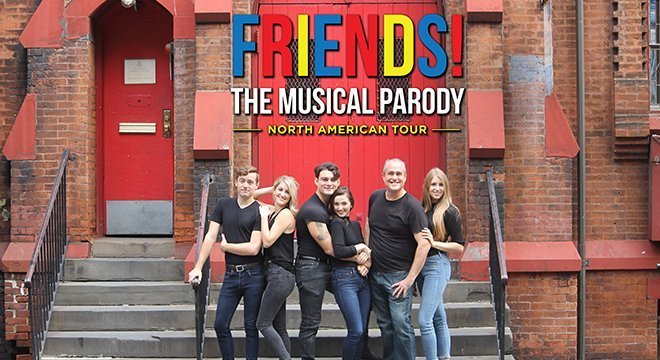 Do you feel stuck in second gear? Was today not a good day? January your month? Has 2019 not been your year out of the gate? Well, my FRIENDS, there is a solution. ‘Friends! The Musical Parody!‘ will stop at Cleveland’s Hilarities Fourth Street Theatre for four nights: Wednesday, January 30 through Saturday, February 2, for a total of seven performances.

The show (lovingly) pokes fun at the six white folks that lived in suspiciously large New York City apartments during the ’90s and ’00s. The show is already an off-Broadway hit and has set up shop in Las Vegas.

Created by Bob and Tobly McSmith (whose credits include ‘Bayside! The Saved by the Bell Musical’ and ‘90210! The Musical’), has received rave reviews from virtually every outlet that has taken in the show!

E! News punned “It made our day, our month, and even our year!” TheatreLife.com said, “Your face will hurt, your eyes will tear, and you’ll be ready to come back and see it over and over again!” Broadwayworld.com chimed in “Smart, funny & moving!”

Even casual fans of the show can tell that with song titles like these, the show is a “can’t miss.”

Complete show and ticket information can be found on our calendar: RIGHT HERE!

Rush to the Rock Hall

APMA’s Announce Initial Round of Performers