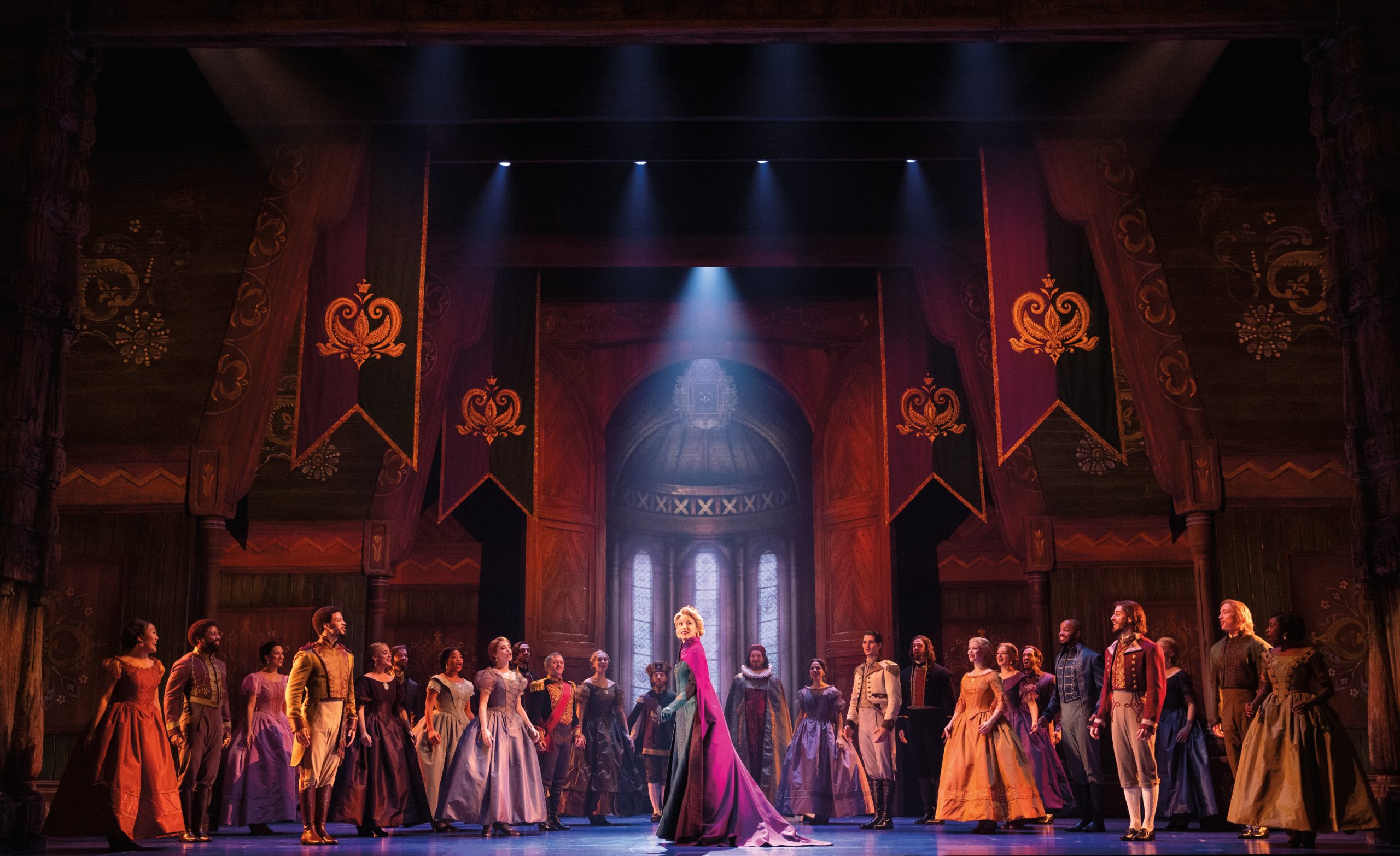 As a town that is somewhat familiar with being frozen much of the year, Cleveland was thrilled that this version of “Frozen” warmed our hearts on stage at Playhouse Square.

It was hard to tell who was most excited for an evening at the theater, the parents or their dressed-up little princesses. You see, they have something for everyone. Children are able to get their photos taken against a rather large illuminated backdrop that puts them into the play, and parents we’re able to order themselves a “frozen” blue cocktail.

While of course based on the Disney film, “Frozen” as a stage production has some surprises just for those who see the musical, with over a dozen songs written exclusively for the musical. All songs were written by Oscar winners Kristen Anderson-Lopez and Robert Lopez. The show is directed by Michael Grandage and based on the book by Jennifer Lee (who also co-directed the 2013 film and wrote the screenplay.)

The entire production is magical. From the incredible set pieces and projection mapping that is used to help with scene changes to the numerous quick costume changes that occur on stage, there is always something new and exciting to look at. Both front and back projections are used to help with creating Arendelle. The production also uses not just surround sound speakers, but 20+ speakers all positioned around the entire audience. This isn’t something that just any production brings to down, but it is something that Disney does!

The show begins with real-life sisters playing sisters in the musical, Young Anna (Victoria Hope Chan) and Young Elsa (Natalie Grace Chan). Their parents King Agnarr (Kyle Mamar Mitchell) and Queen Iduna (Belinda Allyn) tuck them in and say their goodnights. Once left alone, the two girls toss their covers aside and jump up with energy as they show off how close and imaginative they are together, with the help of a little bit of Elsa’s magic. The two grab items from around their bedroom and slowly build what looks like a foreshadowing of what will become Olaf later in the show. “A Little Bit of You,” is one of two songs these two real sisters get to sing exclusively together. Shortly after we get to hear them perform, “Do You Want to Build a Snowman?” It really gives the audience an idea of how talented the Chan family really is!. To the audience’s amazement, the constructed figure springs to life and rides around the stage. Further proving that magic is real.

While playing together, Elsa accidentally hits Anna with some of her frozen magic. This almost kills Anna, if not for the help of the Hidden Folk, a tribe that appears on stage in the creepiest way, accompanied by the song, “Hidden Folk.” While Anna is brought back this time, her parents are too afraid that this could happen again. They leave the family in hopes to find a “cure” for Elsa. However, while they are in this search, they are lost and never to return.

After the loss of the parents, we are greeted with the older versions of Elsa (Caroline Bowman) and Anna (Lauren Nicole Chapman.) The two sisters perform, “For the First Time in Forever,” and we really get to start to see what these accomplished ladies can do. Caroline’s personal confidence really contrasts with her character’s fears of one day again hurting her sister.

As the kingdom gates are opened in honor of Elsa’s coronation as Queen, Anna meets and very quickly falls in love with Prince Hans (Ryan McCartan). Ryan impresses more than just Anna with his performance of “Hans of the Southern Isles.” This love at first sight between Anna and Hans is not a welcome surprise to Elsa. In her anger, she covers the whole town in ‘frozen’ winter storms. Elsa banishes herself from the rest of Arendelle, and Anna follows her. While on this journey this is where Anna meets Kristoff (Zach Trimmer) and his trust reindeer Sven (Collin Baja.) While we never actually hear Collin as Sven (though Kristoff impersonates what he thinks Sven would say, as any good pet owner does) his presence is always known. The way Baja puppets and embodies this reindeer is unbelievable and a joy to watch.

Around this time we get to meet finally Olaf (F. Michael Haynie) a well, which is arguably one of the most anticipated appearances in the entire show. This Olaf looks very familiar to the one both Young Anna and Elsa made when they were children. However, this one talks and walks and has little fear of things that should terrify him. . Olaf is more than puppets, he’s alive, and Haynie brings a wonderful balance of sounding similar to Josh Gadd from the movie, and yet putting on his own spin on the performance. Every detail from the carrot nose to his little snowball feet brings laughter and joy to adults and children alike.

The magic doesn’t stop there. Act One closes with the song everyone came to hear, “Let It Go.” Caroline’s voice reminds the audience that Elsa is a force to be reckoned with. Here in Cleveland, it was a little bit of Disney and a lot of bit of Caroline that turned “Let It Go” into a show-stopping first half closer. While standing midstage, all eyes on Elsa, the dress magically chances in a flash right before our eyes. If you blinked too long you would have missed it. It’s the kind of moment that you can’t believe, even while watching it.

The second Act goes much quicker than the first, with more magic as snow flurries fall and ice crystals appear out of nowhere. Frozen is an all-out amazing production. We expect nothing less from Disney. However, it was the performances that made this night what it is. These new and old songs really make this experience something new for everyone. While this musical is in town for the next month, you would be remiss to not see it. In fact, you’re going to have to hurry before you get Frozen out of your chance!