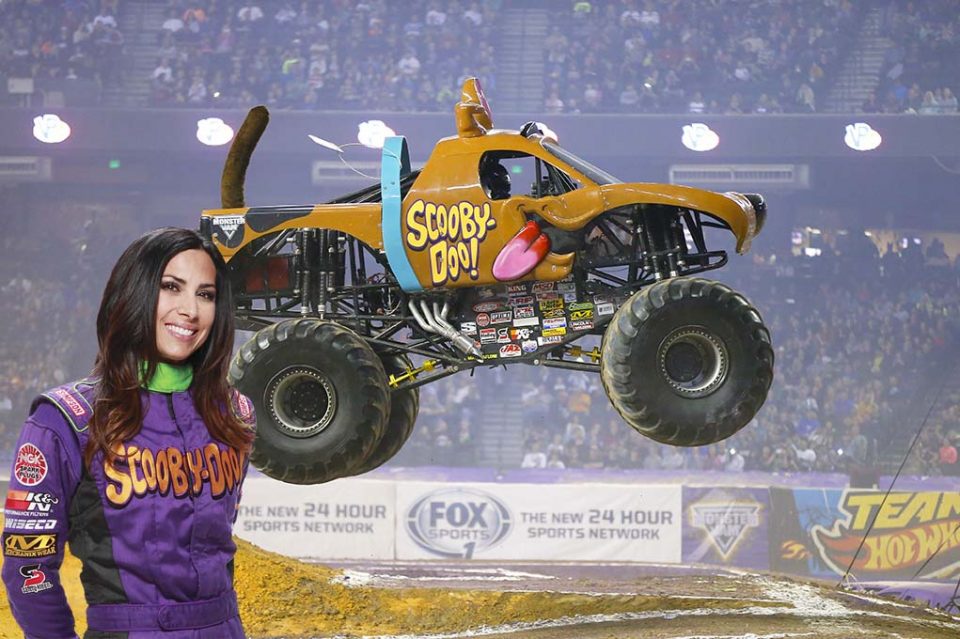 While one moronic Cleveland-based radio personality recently made headlines for his asinine comments about women not being capable of even coaching (let alone participating) in any male dominant sport, Nicole Johnson, a six-year veteran of the Monster Jam® tour circuit, sits high atop her 66″ tires as a fierce competitor in her profession. She drives into Quicken Loans Arena for Valentine’s Day Weekend to take a seat behind the wheel of the popular Scooby-Doo Truck.

“Monster Jam is like no other live family event that you have ever been to. I’m not kidding you when I say that it ignites every one of your senses,” Johnson said during a phone interview. “Not only does it sound like you’re at the drag races; you can feel it rumble in your chest; you can smell the dirt and exhaust. Your eyes just can’t believe what they are seeing.  We’ll be jumping those trucks really high.”

Having previously spent time behind the wheel of other Monster Jam trucks including Tasmanian Devil and Grinder, the mother of two, who drives a Mini-Cooper when not competing, has been driving Scooby-Doo since 2013.

“Everywhere we go, it’s a recognized name. We get so many fans, young and old; it’s really cool,” she says. “It has got a tail that wags on a spring, so if I stop really hard, it spins around. He’s got huge ears and a tongue that sticks out, which just gives it so much life and character. It’s already one thing to have a 12-foot tall, 12-foot wide truck with 66-inch tires, but then the body is actually in the shape of a dog. It’s a blast.”

Scooby-Doo, along with other Monster Jam favorites Grave Digger, Alien Invasion, Mohawk Warrior, Dragon, Monster Mutt Rottweiler, Son-uva Digger, and the brand new Soldier Fortune Black Ops, will all be competing in races as well as perform in a freestyle competition, which Nicole describes as the part of the show when, “we do whatever we want out on the track. You’ll see some really crazy stuff and probably see some gnarly wrecks. That’s what everyone comes to see. It’s really, really, really exciting.”

In her six years of official Monster Jam competition, Johnson was nominated for Rookie of the Year and has won handfuls of races. But she says her career highlight was a once in a lifetime experience.

“I did a back flip in my Scooby-Doo truck at world finals in Las Vegas about a year-and-a-half ago,” she boasts. “I’ve only done it once. I had never practiced it or even attempted it before, but I did it during competition, which was a really cool experience for me.”

Other major achievements for Nicole include breaking the record for most wins by a Monster Jam rookie, along with most wins by a female in a single season. But she doesn’t want to deceive one into thinking that she is a perfect driver. “I’ve had some gnarly wrecks,” she says. “I had one wreck that landed me the ‘Crash Madness of the Year’ award. It’s kind of like a booby prize when you don’t drive good. ‘Here’s a big trophy!’ It’s something to live and tell my grandkids about one day, I guess.”

As for being a woman competing in a predominantly male sport, Nicole’s response is simple. “I get asked all the time about driving a monster truck, but how is it different from being a male or a female?” She asks. “There is no physical barrier. You are using your hands and your feet….regardless of what people say, just pursue your dreams…I think women can do whatever they want to do.”

For those contemplating coming out and investing the all-important entertainment dollar at Monster Jam on Valentine’s Day weekend, Nicole says, “I think it’s a great way for the family to just have a great time together. It really breaks down the stigma that it might just be for little boys or for little kids. I think that everybody can have fun. There really isn’t a reason why everyone in the family wouldn’t totally enjoy the show.”