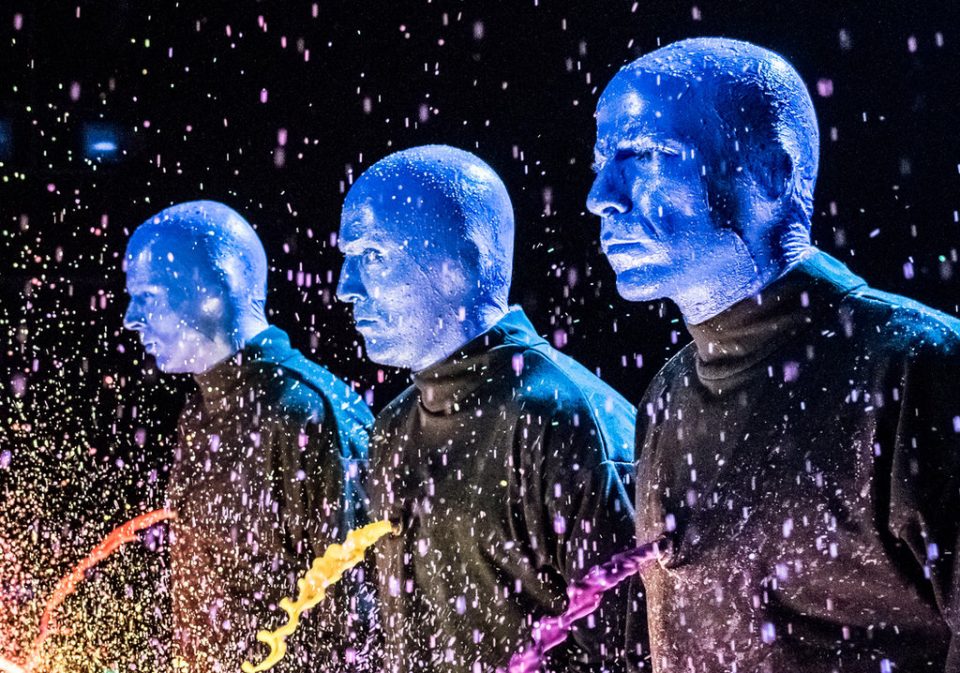 What started as a quirky project for three buddies right out of college has turned into an unlikely world-wide phenomenon of Blue Man Group, whose performances made their way from the streets of New York City, to inside a theater, then to Las Vegas and, eventually, all over the world, including international theater tours and even an arena spectacle that have combined to entertain more than 35 million audience members.

The Blue Man is a character unlike any other across any medium. They are mysterious, inquisitive, and hard to read. To say they are silent may be a bit misleading. While they don’t speak, sing, yell, or verbalize in any fashion, they are loud creatures who can make virtually any object in sight an instrument.

Daniel Carter, who stars in the production that stops at PlayhouseSquare’s Connor Palace Theatre February 5 – 7, explains:

“The character itself takes a kind of very different look at the everyday world around us. It’s this inquisitive, almost kind of innocent person, who sees the world in a completely different way than you or I would see it. We take every object and every situation and turn it on their head. We find new ways to explore the world that is around us. For instance, we use a lot of different instruments in the show, that basically are everyday objects, and use them in ways you wouldn’t expect us to use them. For example, we use PVC pipes. You wouldn’t normally expect them used the way that we use them, but we really came up with these ingenious ways to make music with them.”

Carter, who has nine years of experience as a Blue Man (including productions in New York, Boston, Chicago, Amsterdam, London, and Berlin), started off in classical theater, with performances in London’s West End in shows such as Les Misérables, Taboo and We Will Rock You. Having played drums since his teenage years, Daniel was looking for a role that allowed him to utilize his percussion and acting talents at the same time. What he described as a “lucky coincidence,” was a mixture of his talents & abilities, as well as fitting in the height range of 5-foot-10 to 6-foot-2, among other physical requirements, resulting in a successful Blue Man Group audition.

“I’m not from America, so this is a dream come true to find a job to be able to travel and work,” he said.

Carter says a typical work day involves arriving two hours before the show for soundcheck and a meeting with the band, followed by a 45-60 minutes process of getting dressed in makeup for the performance.

For anyone not familiar with the Blue Man Group’s show, which involves 550 feet of PVC pipes, 50 gallons of paint and 40 boxes of Twinkies in any given week of performances, Carter explains that, “as soon as you step into that theater, you are immediately experiencing a different type of show than you have ever been to before. We really see it as a partnership between us on stage, and the band, and the audience, to create this show. It doesn’t matter what kind of day you have had, where you’ve been, what you’ve been doing beforehand. You are going to come into the theater and come on this journey with us. We really brighten up your day. We use a lot of music that really speaks to the tribal sense of ourselves and we like to use that as a way to communicate with the audience. Anyone who comes out to the show will leave feeling uplifted and will have had a great time.”

The Blue Man Group show reaches audiences like none other, both literally and figuratively. During the show, the actors creep out into the audience and select lucky fans to join them onstage for a variety of fun segments.

“It’s difficult to say exactly what we are looking for. We’re looking for sort of a spark or energy,” Carter explains. “We come out into the audience and we’ll come up to you and look at you and interact with you. That’s our way of kind of figuring out if you’re the person that we want to bring onstage that night. There’s a certain kind of playfulness that we look for, that we present ourselves as a character, so we want to see that matched. But really, we’re looking for someone that is willing to go along with it and have a great time… Maybe willing to be a little out of their comfort zone, but we always take great care of any of the guests that we have up on stage with us and make them feel comfortable.”

For those on the fence about investing valuable entertainment dollars to see Blue Man Group, Carter’s sales pitch is,  “You’re not going to see a show like this anywhere else. This is completely different to any other kind of touring show that you’ll see coming through Cleveland, or even seeing a show in New York on Broadway,” he explains. “We want to create such a fun experience that people can come and appreciate the music, and the lights, and the sound, or you’re able to take a way lot more of the social aspect that we talk about during the show. The ultimate goal is that everyone that comes into that theater leaves with a smile on their face and comes back and see another show as soon as possible. That’s what it’s all about.”

Blue Man Group ‘Dare to Live in Full Color’ performances run from February 5 – 7 at the Connor Palace at PlayhouseSquare. Complete show and ticket info can be found, RIGHT HERE!