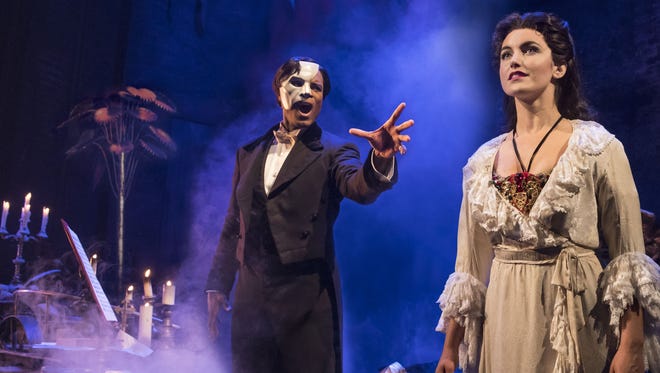 Hailed by critics as “bigger and better than ever,” Cameron Mackintosh’s new production of the Andrew Lloyd Webber timeless classic, The Phantom of the Opera, opens in Cleveland tomorrow night (June 15) with performances through July 10.

In a recent phone interview, Storm Lineberger, who plays Raoul in the production, tells us that when critics call the show “bigger and better,” that it is, “a quite literal comment. The show is, in fact, physically larger than the original production. That is done by much bigger set pieces and more scenery per scene. Paul Brown, the set designer, one of the things he was trying to accomplish was make everything a little more real and different.”

“While I wouldn’t necessarily go as far to say it’s better, I would say that it is different,” Storm continued. “It’s a different kind of storytelling to bring it up to the 21st Century audience. When you contrast with the original production, they use a lot of broad strokes, a lot of curtains to create a facade, it’s not necessarily a huge set.”

Lineberger, a 2014 graduate of Weitzenhoffer School of Musical Theatre at the University of Oklahoma, moved to New York City after college and hoped to land some smaller roles, make a name for himself, and dreamed of one day becoming a star.

He said that landing the role in Phantom almost immediately after finishing school, “was a matter of shock. I had the expectation that I needed to get my feet wet for a little while, that I would have to do the rounds and get in front of all of these casting directors before I would get any kind of real offers,” he explained. “When I got the first call back for the next round of auditions, it definitely became very real. It got to the point when I was doing a show for [director] Cameron Mackintosh himself. Then I thought, ‘oh, wow, this is what this feels like.’ It’s a lot different than you would think. Definitely very exciting, the whole process.”

Performing a leading role in The Phantom of the Opera is not only reaching the pinnacle of success for an actor, but also a dream come true for any fan of musical theater.

“Phantom was the first show I saw. It was a tour that went through my home town. My grandmother took me to the show,” Lineberger recalled. “She said I was leaned over in my chair, practically breathing on the person in front of me because I was so into the show. I think I was about 10. It was the first music I had ever heard, as far as musical theater is concerned. Every tune in the show is a greatest hit that you know when you walk in. “

While Lineberger said the production is different from past Phantom tours, one thing that hasn’t changed? The show’s epic chandelier drop.

“The chandelier drop is the whole inspiration for the Phantom of the Opera myth,” Storm explained. “At the Palais Garnier, in the 1800s, a chandelier actually fell. I think we would be doing the story a disservice by leaving that out. We commissioned the people that did the Olympics rings to do the chandelier drop. No expense spared.”

With total estimated worldwide gross receipts of over $5.6 billion (the highest in history) and total Broadway gross of $845 million (surpassed only by The Lion King), Phantom is the most financially successful entertainment event across any medium to date. By 2011 it had been seen by over 130 million people in 145 cities. So what is about it Phantom that has given it so much staying power since its inception in 1986?

“I think it’s the theme. It’s the message, and that is compassion,” Lineberger answered. “Every person on earth is versed in compassion. Showing someone  that feels different and ugly, not just physically, but maybe on the inside, showing them compassion can save lives. The phantom, by showing compassion, saved a life. I think that message transcends generations. Kids understand it, adults understand it and really appreciate it. People can identify with it. That is why it has the largest fan base on the planet.

“People are so attached to the story, and I love hearing how it affects people in a positive way,” Storm continued. “People come to the show and leave saying, ‘oh yeah, there are people that love me.’ In turn , they show compassion to others. That theme is what has kept it going as long as it has.”

The Phantom of the Opera plays at PlayhouseSquare through July 10. Complete show details and ticket information can be found on our calendar, RIGHT HERE!