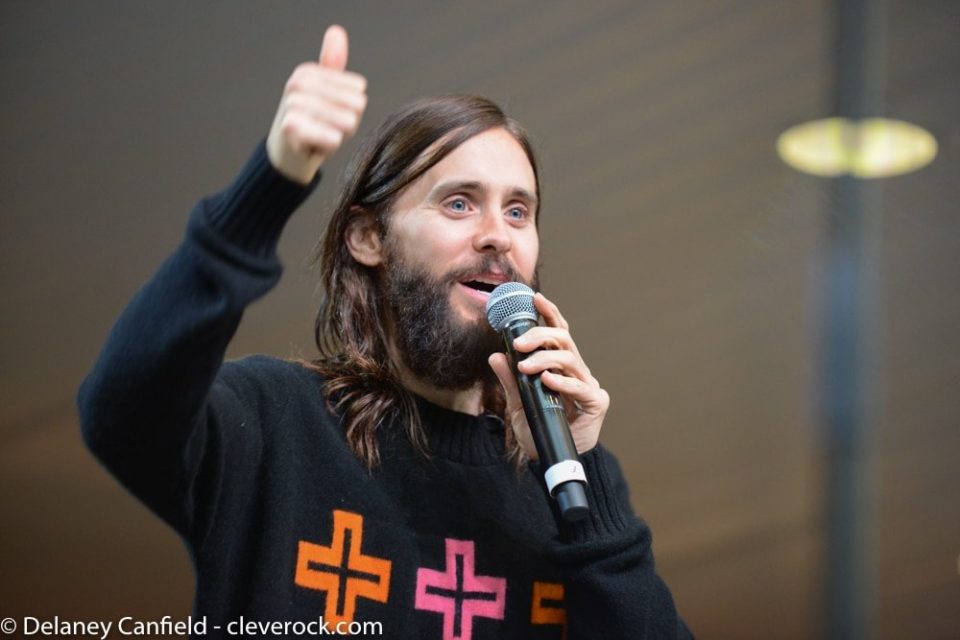 Very few people could draw a crowd of a couple hundred to the Rock and Roll Hall of Fame with just a few hours notice…Jared Leto is one of those people who CAN.

Leto and his band, Thirty Seconds to Mars announced last night that Jared would be travelling across America this week as a promotion for the band’s new album, ‘AMERICA,’ that drops Friday, April 6th.

The band posted on their Facebook that Leto would be “hitchhiking, walking, running, climbing, biking” and doing whatever else he can to make his way across this beautiful country, telling the story of America as he goes.

News broke last night that Leto would be appearing at the Rock and Roll Hall of Fame this morning (04.03.18) at 10am, but the details of the appearance were sparse. However, that didn’t stop fans (and many of their parents) from lining up outside the Rock Hall in the rain to be in the same room as Leto, regardless of what was going to unfold.

Many fans speculated he would play a few songs off the new album, after seeing Instagram stories of him doing this in New York City last night. Instead, fans got to hear the ‘AMERICA’ in its entirety! The album was played over the speakers starting at 10am, giving fans a first listen of the new songs in advance of the Friday album drop. Once we all had our listen, Leto took the stage and greeted fans!

Leto thanked fans for attending and told them about his journey he would take this week, which he said even included possibly “riding a donkey through the Grand Canyon,” before arriving in LA on Friday for the album release.

The Rock and Roll Hall of Fame then presented Leto with an award for Thirty Second’s to Mars single, “Walk on Water” after it remained in the Billboard charts for 6 weeks.

Leto thanked fans one more time, invited one lucky girl on stage for a selfie, and then went back downstairs before leaving on a tour bus, where he said Chicago was his next destination.

Though he was not able to perform today while onstage, Cleveland was one of few stops on Leto’s tour of America. He will, however, grace the stage with the rest of his bandmates this summer on June 16 at Blossom Music Center!

Check out our Calendar event for Thirty Seconds to Mars right HERE!

2021 Inductees Exhibit to open at Rock Hall on October 24