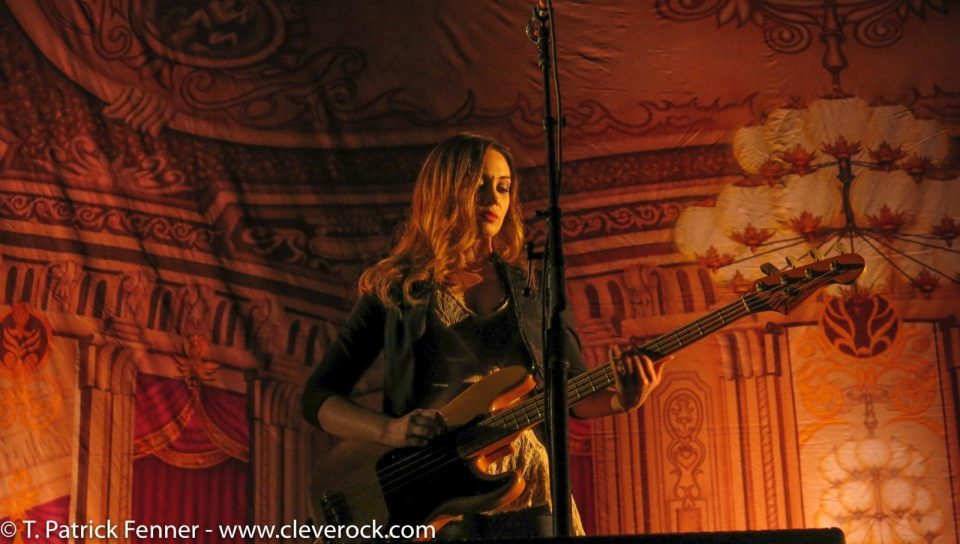 Smashing Pumpkins touring member Katie Cole is not only living THE dream; she is living HER dream. (Or, perhaps, something beyond her wildest dreams?) After laying the groundwork of countless hours, days, weeks, and years honing her craft, a move from her native Australia to Los Angeles, followed by another move from Los Angeles to Nashville; sprinkled with a twist of fate; Cole landed herself what she believed to be a one-off gig with Smashing Pumpkins’ frontman Billy Corgan at one of his solo shows.

Fast forward to 2015, Cole was on the road with the Smashing Pumpkins ‘In Plain Song’ tour, playing bass for the band AND opening the show solo with her beautiful blend of Americana tunes.

“I play bass as much as the next solo guitarist. I explained to other people that bass has two fewer strings, so, therefore, it must be easier,” Cole said with a laugh. “I did sort of the double-duty thing where I did my show, bolted out to the stands/merch area, high-fived people, signed albums or whatever, and then bolted back to the stage to play Smahing Pumpkins show.”

Fast forward once again to last summer: Original Smashing Pumpkins guitarist James Iha returns, shifting Corgan’s longtime employee (and official band member) Jeff Schroeder, with Jack Bates jumping on to play bass. Yet, Cole still got the call, this time to play keys for the band on SP’s arena tour. The tour garnered tons of attention, as it was a 3/4 reunion (minus D’arcy Wretzky, who is likely still chasing horses in Watervliet, Michigan).

This interviewer couldn’t help but inquire about the burning question: How does one obtain this highly coveted gig? In my mind, Katie strolled into the unemployment office in Nashville, filled out a mountain of paperwork, and some schlub working the counter told her Billy and Co. were looking for someone to play bass and chime in on vocals.

“That’s exactly how it happened,” Cole joked. “I had actually had numerous people ask me this, especially other touring musicians have asked me, ‘How did this come about?’ It is a prestigious gig. It’s a very elite position to be in. And, you can imagine that’s not something that the band would publicly announce, ‘We’re looking for this, that, or the other.’ I had a long-running relationship with the band, more so with Billy Corgan. My record producer is one of their record producers, Howard Willing. He worked with the band since the ‘Machina’ and ‘Adore’ records. He has a long history with the band. So Billy sort of knew my music through that association and the relationship sort of kicked off with Billy asking me about the first show,” she explained.

Imagine, a gal from Australia, who grew up listening to Aretha Franklin and Stevie Wonder, eventually progressing to playing Smashing Pumpkins covers in alt-rock bands, is now a touring member of one of her favorite groups. How does that feel, Katie?

“I can’t really explain it! The crazy feeling that you get from being on these iconic stages… like the ‘In Plain Song’ tour we were doing these iconic theaters like the Ryman and the Tower Theater in Philadelphia, where some of my favorite artists have been and cut their teeth and grown their fandom, and to then go on to the arena tour and playing Wembley Stadium and Madison Square Garden… Like, who knew? I feel that way every time I step out on stage and I’m like, ‘What do I get to do today?'” Cole said. “You try not to, for lack of a better term, ‘fangirl!’ I’m from Australia and these people that I’ve really looked up to as musicians or songwriters, they are just right there in front of you. ‘Hi, Robert Smith!’ ‘Hi, Jerry Cantrell!’ You have those moments where I look and I’m like, ‘Wow!’ I’m very overwhelmed, but I’m just super lucky to be where I am.“

The opportunity to perform with future Rock and Roll Hall of Famers in Smashing Pumpkins is something that Cole will NEVER, NEVER, EVER take for granted:

“As an artist myself, I’ll probably never get to stand on those stages. I’m not being pessimistic. What Billy, Jimmy, and James have built with this band, to get to where they are now, is an incredible accomplishment that very few will ever achieve,” she admits. “So, to stand on these stages as sort of a musician; sort of a tourist, lucky to be their type of musician. That’s how I sort of approach it. I’m always in this mode of gratitude. While I’m on stage, playing the songs, I’m very grateful for being there.”

So, yes, we know her name…we know how she got her gig..but who is she outside of her role with Smashing Pumpkins? That’s a bit of a loaded question!

While Australia is a great place for residents and tourists alike, logistically speaking, it’s not a hot touring spot for American artists. Cole knew she found a new ‘home’ when she visited Nashville to record what would become her first American EP.

“I went into a major recording studio and Tracy Chapman was down the hall and Michelle Branch was down the hall, it’s a lot different than Australia, where it’s a luxury to have big names even travel to Australia for concerts, so to know that I was in a city where all the sort of you know acclaimed artists and musicians and studios were,it was great,” Cole recalled. “My genre is a lot different. The fans know that but they don’t care. They just see it as great musicianship and they enjoy it anyway. It’s been really supported.”