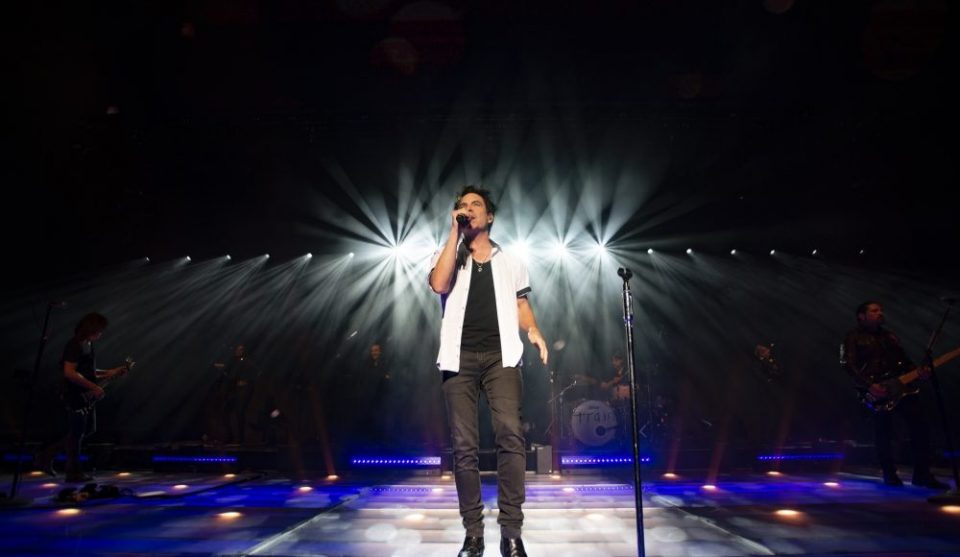 We have sound on the lawn! I repeat: We have sound on the lawn! When Train rolled through Blossom in 2017, it made concert-goers (specifically, lawn patrons) realize a necessity, SOUND, should never be taken for granted at a concert. No worries, this time around, EVERYONE had sound. And, that’s a good thing, too, because all three acts that performed on what was a beautiful summer evening put on great sets.

In a pre-show interview, Train frontman Pat Monahan told CleveRock.com: “There will be someone keeping an eye on sound. We’re not continuing if the sound goes out back there. It’s not fair to those people and it’s not fair to us. Blossom means a lot to all of us. I don’t want to not go there. I just want it to work properly.”

Train, much like their co-headliner, Goo Goo Dolls, have defied the odds with successful careers that have seen high-charting singles and albums in each of the past three decades. Together, they are still able to pack amphitheaters across the country. Tonight, they showed off their bag of industry-survival tricks.

Monahan and company kicked off their set with a trio of radio hits, including set-opener “Calling All Angels” (a tad bit of an awkward opening selection in terms of tempo and fan engagement), which was followed by the fun + upbeat “50 Ways to Say Goodbye.” (And, if anyone is wondering, a sampling of the 50 ways include going down in an airplane, frying oneself getting a suntan, and falling in a cement mixer full of quicksand.) This song has a suspiciously similar theme to Paul Simon’s “50 Ways to Leave Your Lover,” but, we’ll let that slide like the Goo Goo Dolls’ 1998 hit. Rounding out the first round of hits was “If It’s Love,” which Monahan delivered with genuine sincerity.

The fun continued with the singalong “Save Me, San Francisco.” Prior to the first verse, Monahan pitted the left side of the pavilion VS. the right side of the pavilion VS. the lawn in a battle of who could yell the lyric “Oh, hell no!” the loudest. Monahan dedicated the lyric to the traffic getting into Blossom Music Center, drawing approving applause.

As the set progressed, the show’s opening act, Mr. Allen Stone (more on him later) resurfaced to sing a snippet of the Jay-Z / Alicia Keys duet, “Empire State of Mind.” Then, sticking with the duet theme, a rather awkward moment happened when the male/female parts duet that Monahan recorded with Ashley Monroe titled “Bruises,” was performed, with Stone assuming Monroe’s vocals. If anyone male can pull of substituting for Ashley Monroe, it’s Allen Stone. (For those wondering, that is, in fact, a compliment!)

The midway point of Train’s 18-song set was the appropriate spot to play the hit that first put the band on the map in 1998, “Meet Virginia.”

“Is anyone here old enough to remember this song?” Monahan joked – Drawing an affirming “WOO!” from this reviewer.

For the old-school fans, this was the song that drew them to Train fandom. As for anyone in the crowd 25-years-old or younger? This song was likely “new” to them.

The first of three full-length covers was up next, a PHENOMENAL rendition of the Steely Dan classic “Reelin’ in the Years.” (Worth noting: in CleveRock’s pre-show interview Monahan mentioned that seeing Steely Dan perform live at this very venue was one of his favorite shows of all time!)

It’s no easy feat to take on the classics; make them your own; let alone make them great. Train pulled it off not once, not twice, but three times at the show, following up later with Queen’s “Under Pressure,” and Led Zeppelin’s “Heartbreaker.”

Prior to playing their 2010 hit “Marry Me,” Monahan told a story about how he forgot his wedding anniversary last month. This drew some merciless “boos” from the crowd, to which Monahan replied, “Thanks for making me feel better!” He followed up with a quirky story about how Goo Goo Dolls’ bassist Robby Takac realized it was own wedding anniversary the day Monahan told him about his slip-up, prompting Takac to immediately call his wife! (One of those “guess you had to be there” stories!)

Accompanying “Marry Me” was a video showing short clips of various weddings. Instead of showing the typical “perfect” model / dreamy wedding, Train elected to show diversity in both the wedding type and newly-weds, including same-sex and interracial couples, as well as weddings in non-traditional locations. Hats off to the band and crew for being with the times.

The undisputed highlight of the night was the aforementioned cover of “Under Pressure.” Monahan had some powerful help on this one, with much of the vocals coming from guitarist (and Akron, Ohio native) Luis Maldonado as well as bassist Hector Maldonado. These gents both showcased their powerful pipes, making this review writer wish they had been featured even more on vocals throughout the show.

Jumping back into an original, “Drive By” off of 2012’s ‘California 37’ was up next. Luis Maldonado ripped a guitar solo, to which Monahan playfully said that it was “basically his hometown” and that the crowd “deserved a better solo” before he was given a second stab at it.

“Hey, Soul Sister” (including a snippet of Drake’s “In My Feelings” — which was slightly less horrible than the original) and the “Heart and Soul” rip-off, “Play that Song,” closed out the set before Train returned for an encore to perform Zeppelin’s “Heartbreaker” and Train’s #1 hit “Drops of Jupiter.”

Goo Goo Dolls always seem to draw the short straw when it comes to stage time on co-headline tours. They have landed the early slots on co-headlining bills with Counting Crows, Matchbox Twenty, and now, Train. Perhaps it is because the band thrives in this role? Goo Goo Dolls never cease to get the crowd amped up as they roll through their hits from their 1998 smash album, ‘Dizzy Up the Girl,’ while sprinkling in a few newer tunes they have put out over the years so as to avoid the pitfall of relying solely on nostalgia.

The 14-song set kicked off with a trio of GGD classics, “I’ll Stay With You,” “Big Machine,” and “Slide.” Despite the two remaining members still standing, frontman Johnny Rzeznik and bassist Robby Takac, now in their mid-50’s, they looked youthful as ever. Takac playfully danced around the stage the entire evening (no easy feat as he wasn’t wearing any shoes!) In terms of energy, Takac has seemingly found the fountain of youth. In terms of looks, Rzeznik has found a plastic surgeon that graduated in the middle of his class.

“Rebel Beat,” (no. 4 on the setlist), was the first newish song (released on 2013’s ‘Magnetic’) played. Later in the set, another track from ‘Magnetic’ title “Bringing On the Light” featured Takac (who is credited with writing the song) on lead vocals. Robby also sang lead on “Free of Me,” providing further evidence that he was born to be a bass player.

The set’s highlight came about midway through Goo Goo Dolls’ set when one of several of their smash hits from ‘Dizzy up the Girl,’ “Black Balloon” drew a raucous reaction from the crowd. The band responded by having members of their crew disperse a plethora of giant black balloons for fans to whack overhead throughout the pavilion.

Later, the band threw it back to 1995 with their first hit, “Name.” (A sing-along for some; a “what the hell is this?” for those of barely-legal drinking age or younger)

The goos ended the night with a bang, rattling off three high-charting hits back-to-back-to-back. First, “Better Days,” followed by City of Angels soundtrack (and #1 hit) “Iris,” before taking it home with “Broadway.”

The coolest cat on the block, Allen Stone, opened up the show with a 35-minute set that kicked off with the fun “Brown Eyed Lover” and was highlighted by the thought-provoking “American Privilege.” It’s a damn shame that this guy is playing in broad daylight to a near-empty pavilion as fans still trickled in from the horrendous traffic leading to the amphitheater. Stone is ready for the bright lights and capacity crowd. Just you wait.