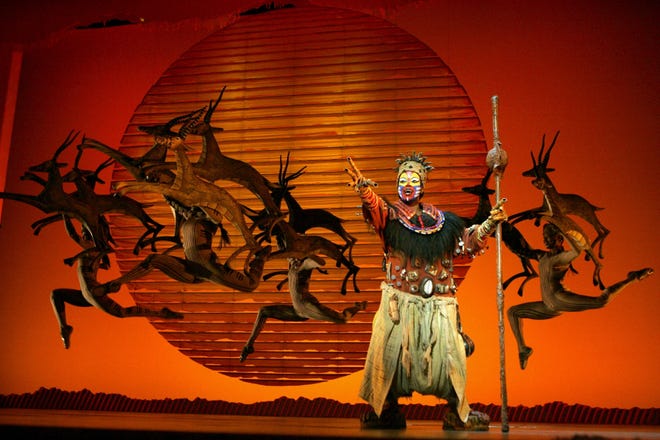 1994: This review writer was 10-years-old, riding in a car to what was believed to be a trip to Blossom Music Center to watch the Cleveland Orchestra (a bore-fest for a lad about to enter the fifth grade). Imagine the surprise when the faithful Dodge Caravan made a sharp turn into the entrance of a drive-in movie theater! No orchestra on this early summer’s eve! It was time for the annual “school’s out” tradition of heading to the theater to view Disney’s animated blockbuster of the year! 1994’s release, ‘The Lion King,’ considered by this writer to be the last of the great animated Disney film in succession (as the quality took a nosedive beginning with ‘Pocahontas’ the following year), was mesmerizing. Save for the lack of audio thrills over a subpar FM signal played through factory-installed speakers in a minivan, seeing the incredible animation and timeless story come to life on an enormous screen was a highlight of that summer.

The movie was met with such critical acclaim that shortly after, someone had the genius idea to scramble and make a Broadway adaptation, which debuted in New York City in November of 1997. In a pre-show interview, actress Martina Sykes, who portrays the evil hyena, Shenzi, noted, “I think people can just relate to the story. It doesn’t matter if you are young or old.” So true! The music of Elton John and Tim Rice paired with a Disney animated film storyline knows no age boundaries. Good thing, too. The birth year range for patrons in the theater last night was probably the greatest span this writer has seen at Playhouse Square since, well, probably the last time ‘Lion King’ came to town!

Prior to the start of the show, a narration plays, noting the 100-year history of Playhouse square; ending with two simple words: “Welcome back!” It gave this writer chills just looking around a full-capacity theater. Yes, everyone had a mask on. Yes, vaccination cards or negative tests were required for entry. Considering the 18-month absence of full-capacity shows and the theaters were pitch dark for 14 months; and considering that nobody knew when, if ever, a full theater would be possible again; ‘welcome back’ drew a round of applause and hollers from the crow. It’s good to be back!

The show begins with the wise mandrill, Rafiki (Gugwana Diamini) alone onstage, singing in Zulu, accompanied by two percussion players, each situated in an opera box on either side of the theater. While the show as a whole strays somewhat from the song lyrics, dialog, and even slightly from the plot of the film, the opening number, “Circle of Life,” remains true to form. The call by Rafiki at the song’s beginning is so familiar to anyone born prior to 1980, and has been sung by EVERYONE with a lap dog or kitten while hoisting their helpless pet into the air.

The six-time Tony Award winner is masterminded by Julie Taymor, the play’s director and costume designer. Without the beautiful costumes, clever masks, and masterful puppetry, the Lion King is a pedestrian production that would have shuttered in under two years on Broadway; never making it to a national tour. Taymor’s brilliance shines throughout the night. Sykes also noted in the pre-show interview that the actors are seen by the audience as “fully human and fully puppet at the same time.” Sounds confusing to someone that has never seen the play, but those who have caught the production know the dead-on accuracy of that description.

No spoilers, but the entrance of the rest of the cast members making their way to Pride Rock is breathtaking. (Not just a quick gasp of air breathtaking; more like a stun of, “Oh, no! I Did I leave my vaccine card at the media check in table?”) If sitting in the orchestra, especially in the closer rows, be sure to give a quick periodic heard turn so as not to miss integral parts of the spectacle.

The first 10-15 minutes are, without question, the best. One could argue the early moments of ‘Lion King’ are as good as it gets for ANY Broadway production. But let’s not let that detract from the rest of the show!

Two of the show’s most prolific characters, Mufasa (Gerald Ramsey) and his brother, Scar (Spencer Plachy) are introduced at the outset. Also making an early entrance is Zazu ( Jürgen Hooper), who frankly steals the show in Act I by bringing the witty and wise bird to life. At one point, he pokes fun at the differences in the film and stage show, yelling, “This didn’t happen in the movie!”

Zazu sings along with Young Simba (Jaylen Lyndon Hunter) Young Nala (Nia Mulder) on “I Just Can’t Wait to Be King,” which sees Simba and Nala riding high atop giraffes.

Sykes makes her first appearance in a scene in the elephant graveyard with fellow hyenas Banzai (Keith Bennett) and Ed (Robbie Swift), where the show manages to balance the dark and wee-bit scary scene with just enough humor to keep it light for the youngsters in attendance. (Also true for “Be Prepared,” where Plachy demonstrates why he is suited for the villain role).

The conclusion of Act I sees Young Simba meet his new BFF’s, a warthog named Pumbaa (Ben Lipitz) and a meerkat, Timon (Nick Cordileone), who sing one of the show’s signature tunes, “Hakuna Matata,” accompanied by the ensemble. [Exit: Young Simba; Enter new actor, Darian Sanders to take over the role.)

During intermission, some uppity folks seated nearby were commenting on the “subpar” performances of the young actors in the show. In a very appropriate snarky response, my colleague murmured to me, “What were they doing that was so great when you were nine-years-old?” C’mon! These are the first shows stage in 18-months. Cut everyone (especially the kids) some slack.

ACT II beings with ping-pong between Scar’s ineptness and Simba adjusting to life eating grubs. No Disney story is complete without a blossoming romance. In unexplained fashion, Nala casually bumps into Simba in his new digs, and naturally, the two displaced lions fall in love. “Can You Feel the Love Tonight,” adapted for the stage show from the #1 hit for Elton John would have made The Rocket Man proud.

Sparing any unfamiliar readers of any specifics of the ending, in typical Disney script fashion, sweet justice is served, the protagonist is victorious; the evil villain is dethroned (both literally and figuratively in ‘Lion King’). Much like a wonderfully gracious and thoughtful Playhouse Square staff member returning a lost vaccination card to a clueless review writer, the finale leaves the audience exhaling in relief.

The show’s plot, as a whole, draws a striking parallel to present day Cleveland. Playhouse Square, one of the city’s most prized gems, is represented by Mufusa. Theater patrons are the loyal and grateful subjects of the Pride Land. Scar represents COVID. Simba taking his rightful place on the throne and lions returning to Pride Rock characterizes the return to semi-normalcy and the ability to safely gather at full-capacity in the KeyBank State Theatre. The circle of life, indeed!

The show is enough to make kings and vagabonds alike, believe the very best!

The cast members are not the only ones who deserved a standing ovation at the show’s conclusion. Let us not forget the fine folks at Playhouse Square for putting proper safety precautions into place, from the top executives to those diligently checking vaccine cards, and, certainly don’t leave out the patrons for adhering to the guidelines. Looking around during the show, save someone taking a quick sip of wine, one would be hard pressed to find a single person not wearing a mask. We’re all in this together, and the obedience to the guidelines speaks volumes that folks never want to see the theaters shutter again in this lifetime

Bravo, everyone! Bravo. And, “welcome back!”

2021 Inductees Exhibit to open at Rock Hall on October 24