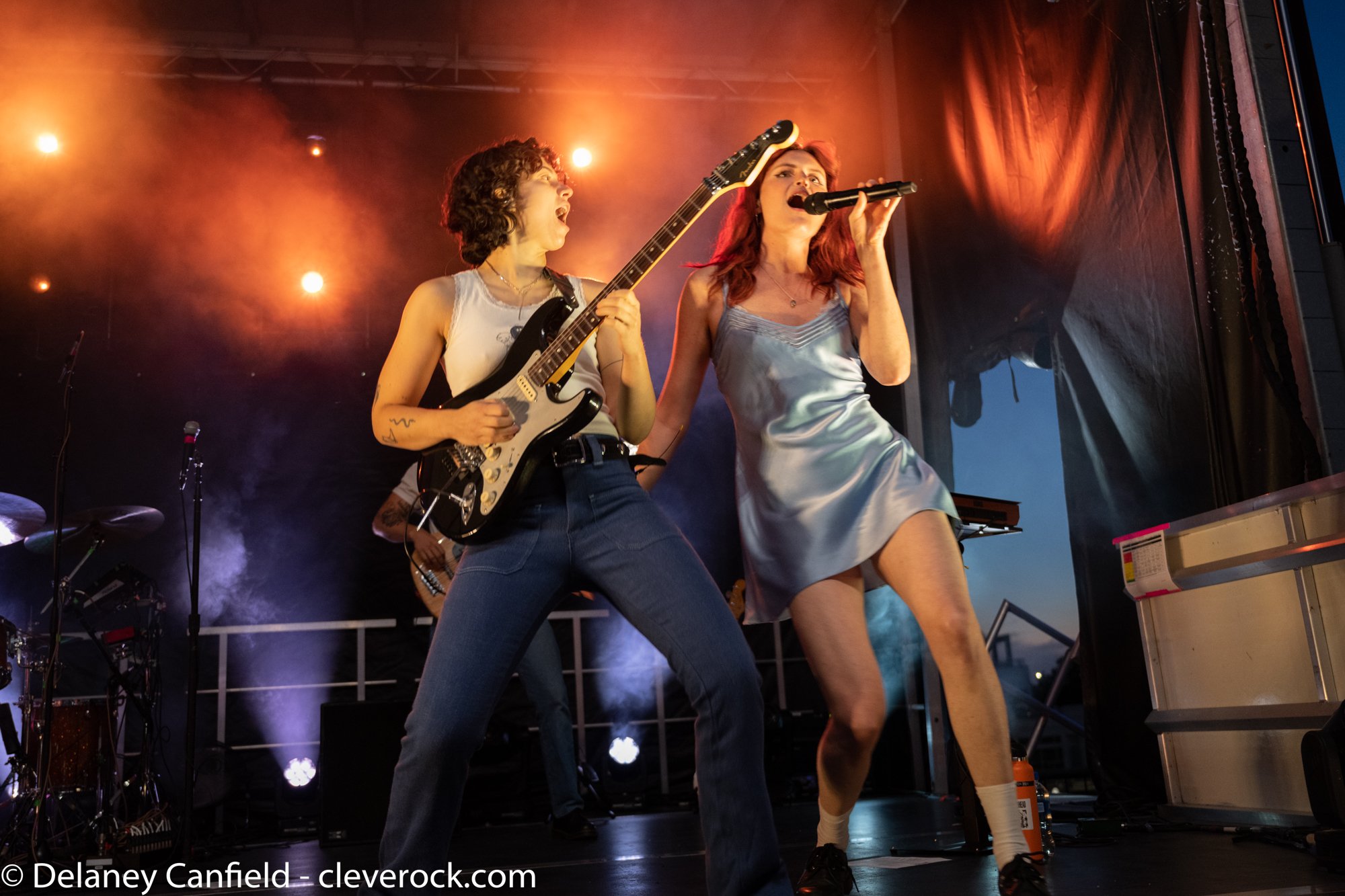 On July 30, 30,000+ flocked to Progressive Field to see Sir Elton John’s THIRD “FAREWELL” show in Cleveland. While Elton may be saying “GOODBYE” Indie-pop darlings MUNA were ready to say “HELLO” to a faithful turnout at the plaza outside the Rock and Roll Hall of Fame and Museum. Fans carried various pride flags and clutched tight to copies of the group’s new album, eager to hear this iconic trio perform in front of the Cleveland skyline.

MUNA is not a new band by any means, but rather a band that got a fresh start in the midst of a global pandemic. After two studio albums, their label dropped them in 2020 at the top of the pandemic, leaving the group unsure how to move forward. After continuing to write and record independently, the band struck gold and found themselves with a viral hit, and signed to independent label Saddest Factory, run by indie rocker Phoebe Bridgers.

One look at the fun being had by all those in attendance, it was evident that the new direction the group decided to go was a hit with fans. The trio took the stage (with a drummer and backup guitar player tucked behind them) and had fans immediately dancing to “What I Want” off their recently released self-titled album (of which MUNA played 10 out of 11 tracks tonight.) Despite the album having only been out for a month, fans screamed along to every word like it has been a staple in one’s collection longer than an Elton John’s greatest hits record.

Frontwoman Katie Gavin effortlessly belted high notes in “Runner’s High” and “Solid” and then quickly dropped several octaves for songs like “Number One Fan” and “Anything But Me.”

This trio has played together for a number of years and has great chemistry as they effortlessly moved around the stage, dancing together and laughing as they worked through choreography. Lead guitarist Josette Maskin had fans screaming as they ground their hips to the beat of every song, smiling and encouraging fans to dance along. Naomi McPherson showed off an array of skills, playing bass guitar and keys, and even taking the mic to sing a verse on the band’s hit “Silk Chiffon.”

Not only were fans excited to hear this group play their fun indie-pop music, but they were also excited to see a group of openly queer artists take the stage together and sing songs about being yourself, loving who you love, and growing as a person throughout life. The lyrics of MUNA’s songs resonated with fans and left them eager for more.

Set highlights included a cover of The Killers’ “Mr. Brightside,” prior to the trip closing upbeat dance song, “I Know a Place”, before returning to the stage for a two-song encore that included a slow one, “Shooting Star” and finally, the song everyone came to hear, “Silk Chiffon,” a song that launched the band into the new phase of their music career, thanks for a viral moment on TikTok and love from fans who adored the openly queer lyrics and fun upbeat melody.

For a band that could have fallen through the cracks in the pandemic, MUNA showed everyone on Saturday night why it’s worth it to work through hard times, and the beauty that can be on the other side. The band’s high-energy show was truly unforgettable, and I am eager to see what comes next for this iconic trio.