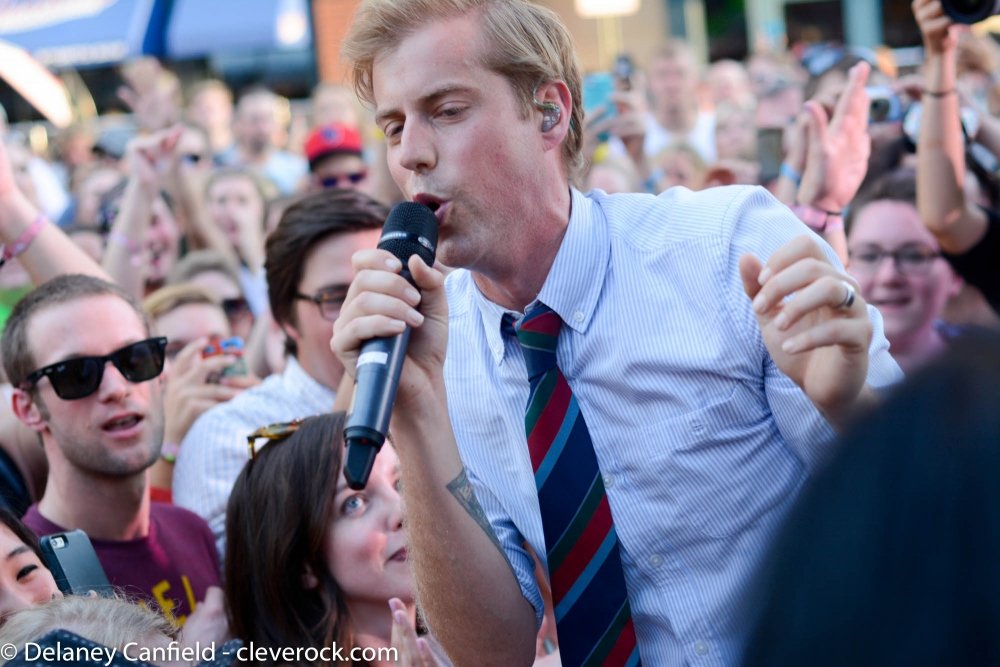 In 2004, the hopes for America faded on two separate but equally important fronts. Dreams were completely dashed that George W. Bush would be defeated in the presidential election by John Kerry, and the breakup of Andrew McMahon’s first project, Something Corporate, eliminated any hopes that we would see him on the road with Chris Carrabba’s group, Dashboard Confessional (which proved especially devastating given the success the two acts had in the early 00s). We shall never know what could have been! Until now, folks! In 2022, a solid 18 years after everyone thought all hope was last, McMahon and Carrabba are finally hitting the road together on the appropriately named ‘Hello Gone Days’ tour.

{Read our 2015 interview with Andrew}

“There are definitely songs that I’ve never put on the stage on this tour, at least not as The Wilderness. I made a point going into this set… We want people to leave and have gotten what they paid for. When you see me and Dashboard doing this together, it’s clear what we’re trying to accomplish. There’s a lot of Something Corporate songs; a lot of Jack’s Mannequin songs,’“McMahon confirms. “I do play a brand new song in this set, but we’re here for everybody to crack back in time, so to speak.”

{Read our 2013 interview with Andrew}

Both Carrabba and McMahon have the luxury of filling venues based solely on their back catalogs. In a previous interview, McMahon discussed the dangers of centering a career around nostalgia. His point is not without merit. Crowds at Gin Blossoms and Everclear shows (two bands that once ruled the airwaves but have not put out relevant records in decades) have dwindled each year; downsizing venues and drawing smaller audiences. However, sometimes there is a perfect storm for a trip down memory lane. (And, by looking at the opening night’s setlists from both acts, this is going to be one helluva throwback party!)

“I think, at least in my mind; I feel the same is true for Chris [Carrabba], this just felt like the right time. I think for both of us have made a real point of pressing for the future and doing everything in our power to release new records and not hang our hats on our history,” McMahon said. “I think that coming out of this pandemic and the resurgence of the songs we wrote being rehashed on the radio, we thought this might be a great moment to step out on the stage together and say ‘Ah, remember when…’ I think there is something nice about it for me at this moment, when we’ve all been through something in the last couple of years, to hit that nostalgia button and maybe be reminded of a time that was a little simpler.”

Two prominent acts. Too much talent for one stage? Who will close the show each night? Not even Andrew can tell us.

“We’re flip-flopping. He’ll do half of the nights and I’ll do half of the nights. Hysterically, I have no idea which nights I’m closing,” he said with a laugh. “He closed [the opening night in] Minneapolis. I’ve done co-headliners before where if you’re closing, some nights you lose a bunch of people who came only for the other headliner. We didn’t see any of that last night. I’m pretty hopeful that if you bought a ticket for the show that there are some songs from each of our catalogs that you want to hear that will keep you sticking around.“

Anyone missing out on either set is doing themselves a disservice.

This your may be about the past, but McMahon is already looking forward to the future with new music on the horizon. After writing his book, Three Pianos: A Memoir, during the COVID shutdown, Andrew got busy writing some tunes.

{Read our 2021 Interview with Andrew}

“No, it’s not finished,” he backtracked. “I’m still mixing and it probably won’t be out until the new year. We have a new song that’s going to be released in the middle of this tour. We played it for the first time last night and it was a blast. I have to say, I’m so excited about it. I started working on new music in 2019 as soon as I got home from ‘Upside Flowers,’ tour, and that’s when everything went down in 2020. I decided to work on the memoir instead and put out the book. I then got to work on new music. I had this three-year window of doing these writing sprints and then disappear back into something else. It’s a pretty rad and diverse kind of group of tunes on the table that have had time to develop. I’m really excited for people to hear it.”

The ‘A’ in Andrew apparently stands for ‘A-Lister.’ Photos of McMahon and stage legends Billy Joel as well as Perry Farrell have circulated on his social media channels lately. In fact, Andrew had rejoined Mr. Joel on tour as his opening act once again, taking the stage at massive stadiums. In a prior interview, McMahon revealed that the first concert he ever attended was Billy Joel right here in Northeast Ohio at the since-demolished Richfield Coliseum.

“When I started writing songs, it was always my dream to get on the big stage. I don’t think in a million years I would have anticipated that I’d get to hold that stage and open up shows for my hero growing up,” McMahon said. “It goes without saying that I felt very honored to get to do a few of those shows at this point. He’s been very gracious. It’s a dream come true, to say the least.”

Andrew McMahon in the Wilderness will be co-headling with Dashboard Confessional at The Agora Theater on Friday, August 5! Complete show and ticket information can be found on our events calendar: RIGHT HERE!