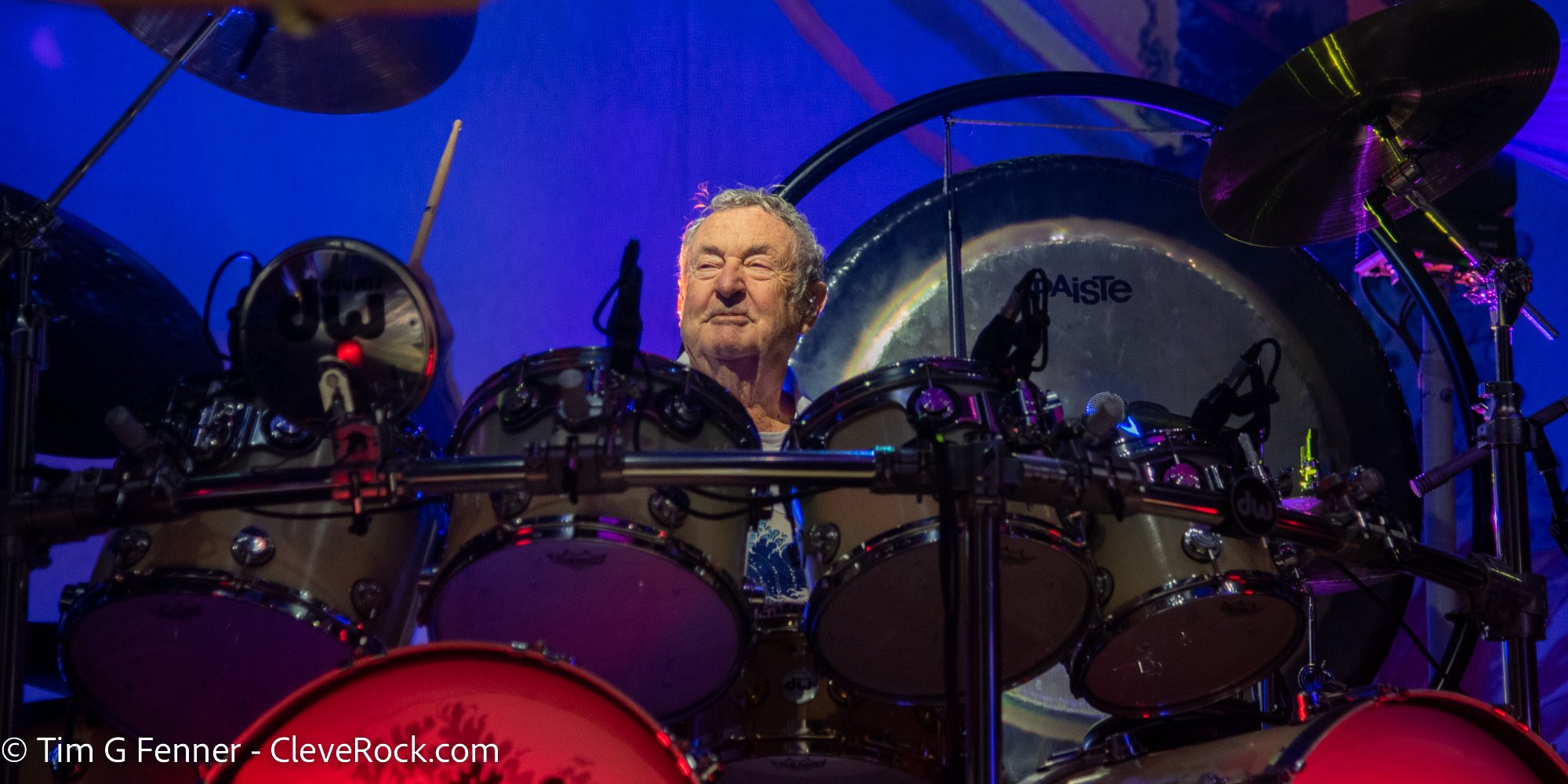 The early (pre-Dark Side of the Moon) Pink Floyd music is about as groundbreaking as it gets. As a tribute to this amazing sound, the band’s then-drummer, Nick Mason formed the band (with a push from guitarist Lee Harris), Saucerful Full of Secrets.

The idea was to celebrate the early Syd Barret (lead guitar prior to David Gilmore) roots of Pink Floyd. Gilmore officially replaced Barret in April of 1968.

The Saucerful of Secrets, “Echoes Tour” pre-show (as folks are taking their seats) begins with a psychedelic backdrop and the spacy sounds of the early psychedelic music. The sound effects contain pieces of some of the old Floyd sounds and eventually lead into a countdown to the actual start of the show. And the show starts with stormy-sounding winds and the heavy base of “One of These Days” from the ‘Meddle’ album. The slide guitar is covered perfectly by Harris.

At the conclusion of the opener, Mason stands from behind his kit, welcomes the audience, and reminds us all how much he loves the Akron Civic Theater. Many may not recall, but Pink Floyd made its first Northeast Ohio appearance at this very theater in 1972 and Mason remembers this very well. He goes on to say it had to be his favorite theater to play and how much he always enjoys this audience.

I have to say in all the decades I have seen ‘live” Floyd I do not remember ever hearing Mason speak. It was a bit heartwarming to hear him talk so well about our community.

The show was split up between two acts with one encore. Mason continues to comment throughout the show, adding interesting historic details. One such detail was the original title to the songs “Candy & A Currant Bun” and “Vegetable Man”. Both these songs were combined into one song and Mason comments that the original title for these two songs was intended to be “Let’s Roll Another One”. Something the old band did not think would market well.

The early songs still have much of the Syd Barret influence with tons of spacy tones and very creative use of electronic instrumentation. All the Floyd band members contributed to this unique sound.

Probably one of the most interesting covers played in the first act was “Set the Controls to the Heart of the Sun.”.This song was originally released in the summer of 1968 (started recording in early 1967) This extremely interesting song (classified by Wikipedia as “Space Rock, Avant-Garde, Psychedelia”) begins like a spacy ballet that builds to a very loud and very heavy on the bass crescendo. Originally written by Roger Waters, the song was influenced of all five Floyd members including both Barret and Gilmore. Mason switches to timpani mallets for this song.

The second act includes “Astronomy Domine” (‘Piper at the Gates of Dawn’ release), “The Nile Song” (‘More’ release), “Burning Bridges” (‘Obscured by Clouds’ release), and others. The best of ACT II was the ending song, “Echos” which is the entire second side of the 1972 vinyl release ‘Meddle.’ The first note, the ping coming from Bekon’s keyboard generates a roar from the crowd. Kemp, Pratt, Harris, and Bekon along with Mason created an amazing recreation of this classic not only instrumentally but in harmony as well. These guys nailed it; earning them a well-deserved standing ovation.

The encore followed and included “See Emily Play,” “A Saucerful of secrets” and “Bike.”

This outstanding performance was played for a crowd of about 2,600 of all ages (although leaning toward an older crowd), many bringing their children or grandchildren. I sat next to a father who brought his 13-year-old son. His son was a big-time David Gilmore fan and played guitar himself. A ton of nostalgia in the theater with many dressed in very classic Floyd tee-shirts along with many other same-era bands (I did see an awesome Hawkwind tee).

The Akron Civic theater is a great venue to see live music. The lighting and backdrops were classic late 60scomplimenting the music perfectly. The audio was clean, sound equipment was just the right size for this amazing step back into a psychedelic past with some of the best musicians to do it.

Less Than Jake & the Grog Shop Both Celebrate 20 Years