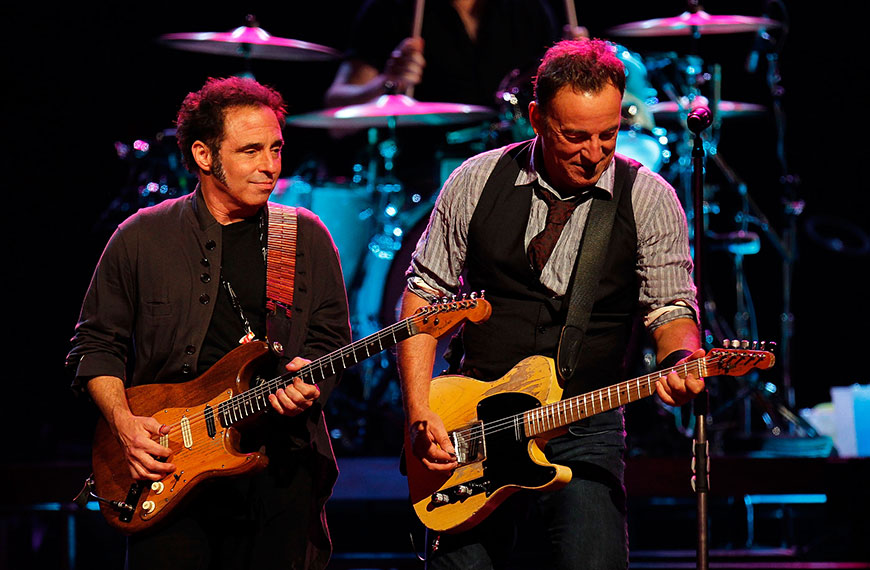 There are two things that Nils Lofgren undeniably loves: his wife, Amy, and his music. During the course of an eleven minute phone interview from his hotel room in New York City, he mentioned Amy by name on nine separate occasions. His love of music is evidenced by his astonishing resume, which, in addition to his solo career, includes being a member of Bruce Springsteen’s E Street Band, a former member of Neil Young’s Crazy Horse, recording credits with Lou Gramm and Lou Reed, and live performances with Jerry Lee Lewis and Ringo Starr’s All-Starr Band.

Lofgren will be in Cleveland with Bruce Springsteen and the E Street Band on February 23, a tour revisiting Springsteen’s classic album, ‘The River’ (1980).  The shows on this trek will feature a full-length sequential performance of the album. Set lists so far have exceeded thirty songs with shows clocking in at over 200 minutes.

Nils first joined E Street Band in 1984 as the replacement for Steven Van Zandt. When Springsteen revived the E Street Band in 1999, both Van Zandt and Lofgren were on board. With only so many guitar parts to go around, Nils found himself playing lap steel and pedal steel instruments as well. He was not yet a member of Springsteen’s gang when the initial tour supporting ‘The River‘ took place, making this run of shows a fresh experience for him.

Nils, who once fronted his own band called Grin in the early ’70s and having recorded a decent amount of solo material, has made his biggest impression as a consummate backing musician.

“I know a lot of solo artists aren’t interested in backing up others, but I don’t see it that way. I see it is having a different role to contribute to something very powerful that’s good for an audience, that may send them with some musical inspiration that may linger in their lives. There’s no small part in that,” explained Lofgren.

While still a teenager, Lofgren found himself in the studio with Neil Young, recording piano tracks on the ‘After the Gold Rush’ album.

“Even then, I thought, ‘wow, it’s nice not to be the boss.’ ” He means that it’s nice to be in charge, not that it’s nice to not be Bruce Springsteen (“The Boss”). “It’s nice to be on a great team of musicians while working on a beautiful project and not be the leader,” he continued. “There’s a lot of non-musical issues that the band leader has. I still remember that, even at the age of 18.”

While he’s made his living primarily behind the scenes, Lofgren DOES enjoy being the boss from time to time. At the insistence of his wife, Amy, Nils began recording all of his shows from a recent tour. The result, a live album titled ‘UK2015 Face the Music Tour.’

“Halfway through the run, Amy said, ‘These are the best shows I’ve seen you do. You need to record them.’ It was her idea,” Lofgren admits. “Martin Wharton, who mixed it, is our sound man who plugged it in every night. It wasn’t a big deal and we didn’t see it coming. It was kind of a blessing.”

The album is fantastic. This isn’t empty praise thrown at Nils out of respect for his contributions to music. It’s an album filled with genuine tunes, met with genuine approval from the live audiences, and it is genuinely good.

The highlight of the album is a tribute to the late Clarence Clemons, a longtime member of the E Street Band and good friend of Lofgren.

“I was writing an album that was old school. It had a very honest take. One of the songs was ‘Miss you Ray,’ about Ray Charles. It was a metaphor for loss. The theme is that as you get older, you start losing so many friends and family that grief can take you out and blind you to what’s left. In this case, I was coming up on my 60th birthday, and tragically, on that day, I was in Florida burying my good friend, Clarence. I was miserable and very heartbroken,” Lofgren remembers.

“Amy insisted on taking 30 of us to a birthday dinner, which I didn’t think was a very good idea at the time. It was one of those five and a half hour meals where you laugh; you cry. It was very commiserative,” he continued. “Friends of Clarence’s from all over the world came out. It reminded me that I missed the whole point of my own song. Again, grief can take you out. Hats off to Amy for that dinner because it reminded me of the song and since that night I’ve been singing ‘Miss You, ‘C,” speaking to the E Street Family and our losses. Clarence being the biggest, at least to me. I’ve been singing it ever since and was glad to get a version on this new CD.”

When quizzed for a highlight in his musical career, Nils was hard pressed to come up with an answer. (Understandable, considering his achievements.)

“I love performing more than anything where music is in my job description. I prepare during the day enough to turn my mind off a little bit and just trust my musical instincts, which I was just blessed with, they are not of my making,” says Lofgren.

“I don’t take anything for granted. I have a long day of preparation… Physical therapy for aches and pains, musical study, my own homework, whatever surprises Bruce has at soundcheck, so that when we walk out at 8:00 we can do something magical for an audience with a great team of musicians,” he continued. “To me, having that focus, having that in front of me, having my wife Amy with me, that makes this day my greatest day. I’ve been blessed to have a 48 year run. Every day is a special day, especially when you have a gig in front of you to play.”