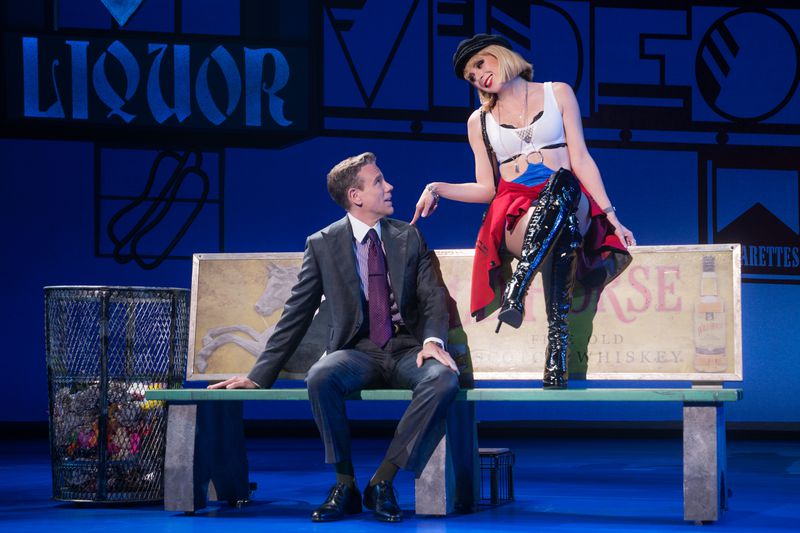 Born in 1983, I was only seven years old when the film Pretty Woman was released in 1990. Hardly appropriate for a lad my age, my parental units didn’t permit me to see the film with the ‘pretty woman’ on the VHS box.

Fast forward to 2022: It’s been 20+ years since I’ve legally been allowed to see the movie without being accompanied by a parent or guardian. The film is widely considered a classic. I’ve seemingly seen every other classic film besides the one in question (with no rhyme or reason not to).

Now, I’m at a crossroads. I COULD watch the movie before going heading to Playhouse Square to see Pretty Woman: The Musical as a stage play and learn the plot from the acting of Julia Roberts and Richard Gere, OR, I could let the story be told to me for the first time through the music of Grammy-winning, “Summer of ’69” performer Bryan Adams and his songwriting partner, Jim Vallance. Arguably neglecting my journalistic duties (so I could tell you, the reader, the similarities and differences between the stage show versus the film), I opted for the latter. I’ve gone 30+ years on this planet without knowing the full storyline, what are a few extra days going to hurt?

No regrets from this writer! The story very much exceeded my expectations. The movie has reigned in pop culture for decades and the plot has been jokingly simplified to a businessman falling in love with a prostitute. (There is more charm to the story than that!)

What struck me more than finally learning the story, however, was the talent involved in the production and performances onstage.

Honestly: Has Bryan Adams ever written a bad song? (I’ll wait….) No? The soundtrack to Pretty Woman is no exception. It was one of the reasons I was excited to see the show and my lofty expectations were met.

Adding to the hype, this production was directed and choreographed by Jerry Mitchell (“Kinky Boots”) who is a Tony Award winner and has created what has been hailed as a ‘film-loyal’ portrayal.

I equally anticipated the performance of one Mr. Adam Pascal, a Broadway legend who starred in the original cast of RENT starring in the leading room. For avid theater fans, seeing him onstage would be worth the price of admission. My heart sank a bit when I received an e-mail from a Playhouse Square media rep that Pascal was sidelined with a cold for media night.

Much like sports, there is no crying in theater. NEXT MAN UP! In this case, that man is Chris Manuel. There’s a lot of pressure to fill in for the star of the show.

The musical begins with Vivian Ward (Olivia Valli) working the streets of Los Angeles with a head full of dreams (“Welcome to Hollywood”) where she runs into Edward Lewis (Manuel), a rich, handsome bachelor, who is lost in the city and in need of directions… not expecting someone of Vivian’s… ‘profession’ ( ie; lady of the night) to be the one to help him.

Vivian offers her navigational services about town for a price, leaving Edward impressed as she negotiates her business with someone as skilled as him. Edward is in town for a hostile take over of a company with the intent to sell it off for parts, but he could really use some eye candy by his side to help him while he’s in town.

Of course, what starts as a business deal evolves into a more complex storm of emotions. Edward can’t help but feel there is something special about Vivian, serenading the crown with the longing ballad “Something About Her.”

Vivian gets a chance to see how the wealthy live and gains confidence as a beautiful and talented young woman. At the same time, Edward leans into his softer side and learns that there is more to life than his business deals and accompanying money.

Valli was a wonderful lead, bringing not only a powerful singing voice but also superb acting skills. She was serious when needed, but knew how to get a laugh out of the audience. She wowed the crowd with her stunning vocals on “This Is My Life” and “ I Can’t Go Back.”

Where Pascal would have been her equal, with him out, she had to find chemistry with Manuel. Coupled with the professionalism and showmanship of Valli, Manuel did a tremendous job filling in. His vocal range was shown off in “Freedom” and the chemistry between him and Valli shined through in “You’re Beautiful,” the closing number of the first act.

One could gather that Manuel didn’t have the reps under him that a lead might typically expect to have had with the role, but that is what made it all the more impressive. The whole ensemble seemed very proud of him when the curtains were closing and he took his bows.

Amma Osei, who plays Violetta (as well as other ensemble roles), had a truly jaw-dropping moment during her number as an opera singer that Vivian and Edward attend. This woman’s voice made us forget that she was part of a show within a show. The applause for her alone rivaled that of the end of the final bows. Her power and control were noticed by everyone in the audience.

Kyle Taylor Parker was a show stopper as well and the audience ate him up as he performed 3 separate characters, (the narrator, hotel manager, and Rodeo Drive store operator.) His blend of comedy and performance was appreciated by all as he quick-changed his way through the show.

Pretty Woman: The Musical was, in a word: “FUN”. The music, the performances, the humor, and the drama helped keep the audience engaged while telling a story that most know and love. The show didn’t need to be one-of-a-kind to be a great time. Life isn’t just about the destination; it is about the journey. Whether you’re a billionaire businessman or working the streets of Hollywood Blvd, everyone needs some happiness and a dream. You will, too if you are able to catch Pretty Woman: The Musical by March 27.

(Who knows, maybe I’ll return to see Pascal if he recovers from that cold! I might even tune into the film on Disney+ in between)

Pretty Woman: The Musical is at Playhouse Square through March 27. Complete show information and ticket details can be found on our events calendar: RIGHT HERE!