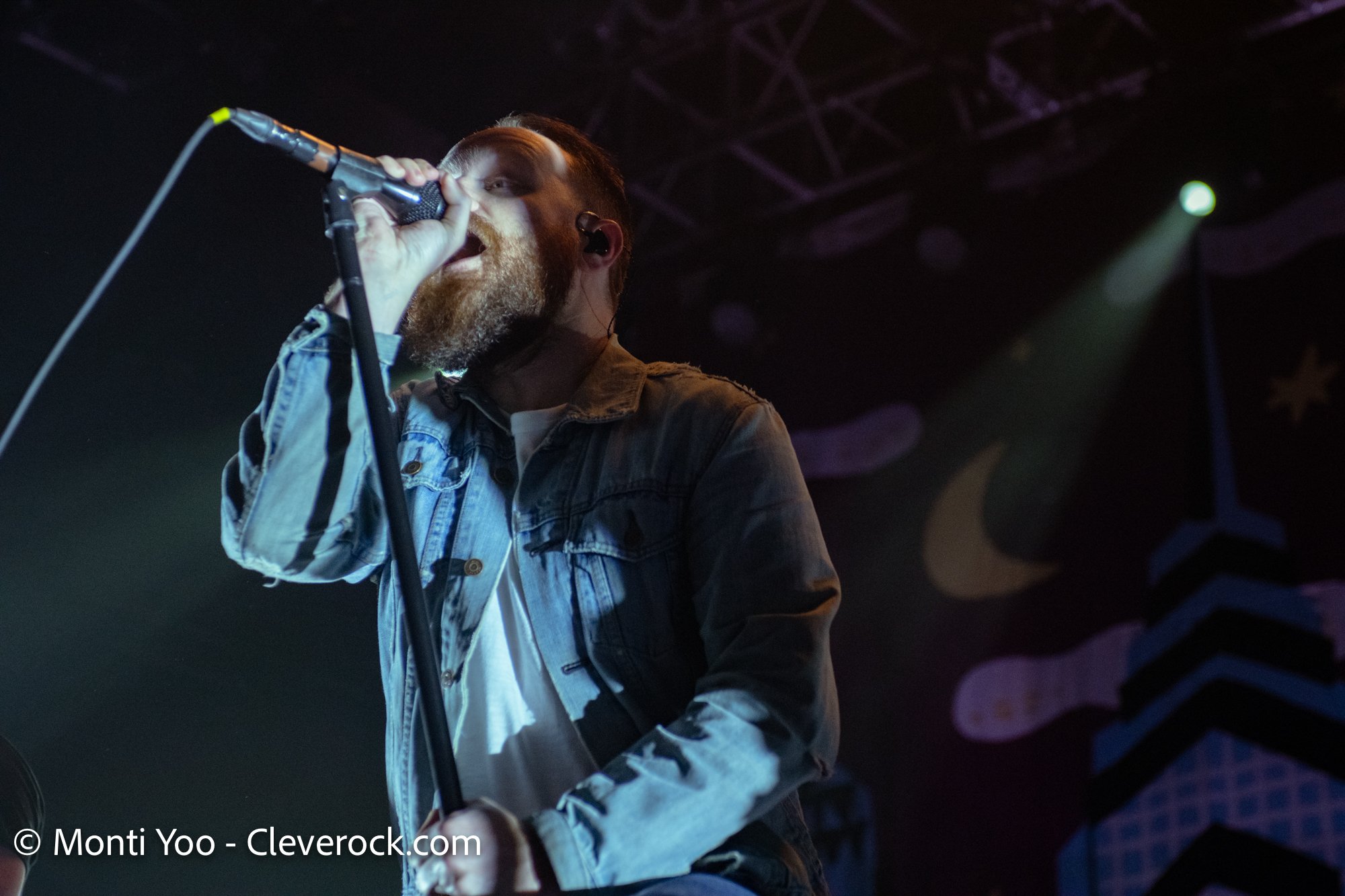 After three lively openers, The Wonder Years delivered a balanced, emotional, and energetic performance at House of Blues on March 10, 2022.

The night started with an opener from New Jersey, Save Face, who set the tone for a somewhat chaotic evening. At one point, lead singer Tyler Povanda lifted his mic stand and was playing Paul McGarry’s guitar with it, and then threw it in between McGarry’s arm and torso. I’ve never seen anything like this! It was really fun to watch it happen at close range.

After Save Face bowed, one of my favorite bands, Origami Angel, delivered a high-energy set. Despite being a two-piece, this duo’s sound filled the room as well as any full band. With Ryland Heagy on guitar and Pat Doherty on drums, it was fascinating to hear how full the songs were with only two instruments. Heagy’s skill on Guitar makes up for the lack of accompanying instruments, as he showcased many arpeggios and high-octane riffs.

The final opener, Spanish Love Songs is a five-piece band formed in Los Angeles. However, lead vocalist Dylan Slocum told the audience that the band members were from all over the nation. He mentioned that Trevor Dietrich, bassist, hails from Cleveland, so that could make them a Cleveland Band! They were a great gateway into The Wonder Years, delivering a fun and energetic performance to get the audience excited for what comes next.

Hailing from neighboring Pennsylvania, The Wonder Years matched the charisma of the other acts, and I dare say took it to an even higher level. Performing songs from two albums, ‘Suburbia I’ve Given You All and Now I’m Nothing’ and ‘The Upsides,’ the lengthy set never lost its luster and captivated the audience throughout the duration of the show.

The six-piece band includes Dan ‘Soupy’ Campbell (lead vocalist and occasional guitarist), Matt Brasch (rhythm guitar), Casey Cavaliere (lead guitarist), Josh Martin (bassist), and Nick Steinborn (Keyboardist) in a parallel line in the front of the stage in front of drummer Mike Kennedy, who was seated towards the back of the stage. In the middle of the line of talented musicians, Campbell had a raised platform, making no mistake who the frontman is in this band!

Starting with their performance of the album ‘Suburbia…’ the band performed “Came out Swinging,” a perfect opener with boatloads of emotions. The audience definitely agreed! There were several crowd surfers during this performance (I think I saw the same guy crowd surf to the barricade twice in just this song!? Props to that dude for his stamina and ambition. It will take him far in life.)

Instead of full lighting from the front and back, the band had lights on either side of them, parallel to the line that they stood in, which added some shadows to some of their faces, adding a dramatic effect. About 40 seconds into each song, the lights would come on and the band would be in full view.

In between most tunes, the band had cut the lights and offered a transition into the next song. The performance of “Wake Up Older” still delivered the same punch as the first song, and that platform was put to good use by Campbell when he jumps from it in excitement.

During the performance of “Local Man Ruins Everything,” The Wonder Years put special effects to good use. On either side of the raised platform, a machine-generated smoke that was pushed vertically gave even more life to Campbell and the band to deliver to the audience, which brought more cheers (and more crowd surfers)!

Prior to delivering “I Won’t Say The Lord’s Prayer”, Campbell felt that an explanation was needed for the song. He explained how it is “The most willfully misinterpreted song in Wonder Years,” and went on to say “I don’t care about anybody’s relationship with God, they can believe in whatever they want” … “But when they leverage that relationship to push homophobic, racist, transphobic motives, we have a problem with that”. A good message for a good song. Nobody should support these views, and using his literal and metaphorical platform to talk about it encourages the vanquishing of these thoughts.

Before performing the finale to ‘Suburbia,’ “And Now I’m Nothing,” Campbell told the audience what would come next in a funny matter. “Since our records are getting old, that means we are getting old, too. It’s okay, we can still move alright. I don’t want to make any assumptions, but if we’re old now, maybe y’all are kina old too? We could see the possibility. We are going to give you a break after this song”. It showed Campbell’s personality and gave the audience a laugh as well, with a long performance of two albums everyone could use a break.

The band continued to perform songs from ‘The Upsides.’ still giving the audience energy and crowd surfers were still prevalent throughout the night. Man, it seemed neverending!

The band performed their final song from the album, “All My Friends are in Bar Bands”, and included the openers as well. Ryland Heagy from Origami Angels, Tyler Povanda from Save Face, and Dylan Slocum from Spanish Love Songs were all brought to the stage to perform this song with The Wonder Years. In my concert attending history, I had not yet seen this before, and it was inspiring and really nice to see.

They returned to the stage for a three-song encore, concluding the night with “Living Room Song.”

The four bands combined for an energetic and fun performance in Cleveland, with a seemingly endless wave of crowd surfers and cheers that only brought more energy to the night.