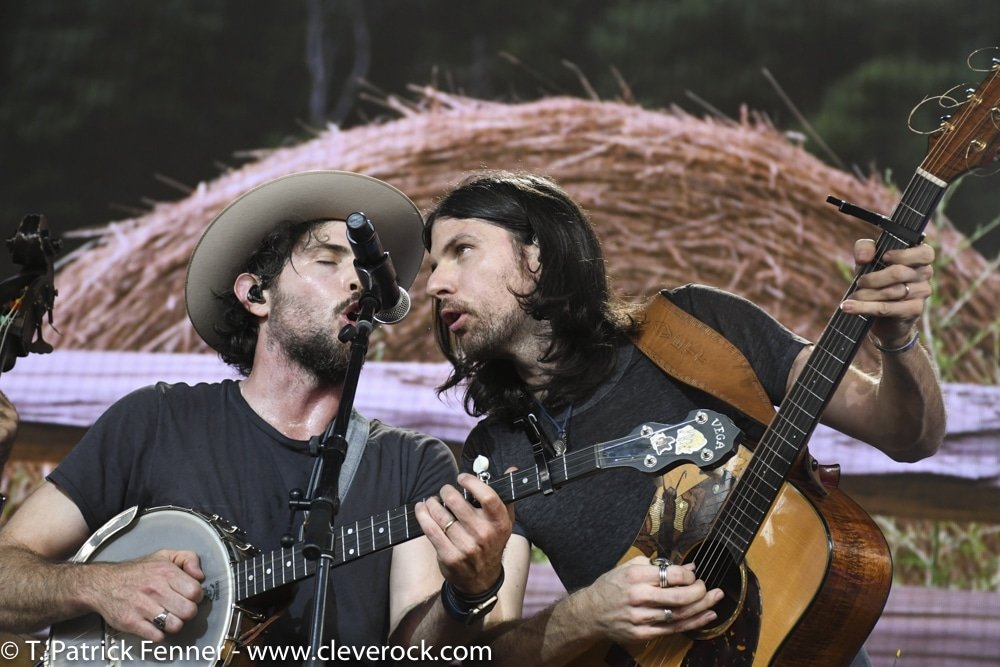 The Avett Brothers are returning to Cleveland for the first time since the COVID shutdown when they played the Wolstein Center in 2019. The brothers (and their bandmates) will perform at Jacobs Pavilion at Nautica on Friday, June 10! {Complete show and ticket information can be found on our events calendar: RIGHT HERE!}

(By the way, a huge ‘WHAT WERE YOU THINKING?!?!?!’ goes out to the concert higher power for scheduling this show the very same night that Dave Matthews Band is at Blossom Music Center. UGH!)

Composed of brothers Seth and Scott Avett and accompanied by a variety of musicians that include longtime staples Bob Crawford (bass) and Joe Kwon (cello), the band has been one of the top Americana/Roots acts in the country for nearly two decades, accruing three Grammy nominations and selling out venues with a capacity of several thousand across the country.

This interviewer had the sincere honor to chat with Seth ahead of their upcoming tour stop. A long-time fan (Avett Brothers sat atop my Spotify Wrapped for 2021), it was a treat to have Seth on the line to discuss his upcoming Cleveland show, returning to the stage post-shutdown, the band’s involvement with the musical Swept Away, and the power of art.

Music lovers are starved for entertainment. The concert industry was one of the first to close and the slowest to reopen, with many shows requiring proof of vaccination and mask-wearing throughout the performance in 2021. Seth was asked about the importance of the return of live concerts.

“For one thing, I feel like you can call it entertainment needs, but another way of classifying that is really that feeling of connection. It’s not like getting somewhere and yelling, ‘Entertain Me!’ It’s more about an underlying (not even that deeply planted), meaning to live shows which have a lot less to do with entertainment and a lot more about a shared connection,” he said. “Being shown the evidence of our connection and the evidence of our being one, in a way, shows music is a really intoxicating version of that proof that we’re connected. I think that it’s perfectly reasonable that we would really hunger for it and feel the pain of it not being present in our lives.”

The Avett Brothers were one of the first acts to use the innovation of drive-in theater concerts and socially distanced shows at the Bonnaroo Farm once it was safe to do so. Seth spoke on the transition process for the return of concerts.

“The drive-in shows were super cool; super memorable. But it is not the same as getting close and getting down. The entry back into a more traditional form of playing for folks, it couldn’t just be like flipping a switch, just like the pandemic itself wasn’t like flipping a switch. For some people, it is 100% over. For some people, it’s still on full lockdown. For some, it’s halfway. Everyone has their own interpretation of what reality is,” he said. “Going back to the stage, it wasn’t like, ‘That was tough, but now it’s great, let’s rock and roll!’ It predictably came with a certain amount of nerves, anxiety, and the thought of ‘Can I give myself permission to enjoy this?’ I’m thinking that I could negatively impact the world or my neighbor. Our first real shows back were those three nights on the Bonnaroo grounds where we had everyone all distanced like a grid of squares for different bubbles. It was awesome. It was emotional to return to anything like a normal performing situation. It’s gotten better and better. Now, all of the shows we’ve played recently have been full on, indoor and outdoor; I’m extremely thankful for the return to that and that more traditional dynamic of live performance, for sure.”

One of the more impressive achievements of The Avett Brothers is their music is used as the backbone for the musical, Swept Away. The show debuted at Berkeley Repertory Theatre in January 2022 and was met with critical acclaim. The story was created from The Avett Brothers’ lyrics and their songs are the show’s soundtrack. Seth explains how the show came to fruition.

“Scott and I were involved throughout the process for years, up until the point of it being debuted. {Story writer} John Logan took us with him for the first revision of the book already happening. He was turned on to our music by a producer named Matthew Masten. He’s wonderful. John started to explore our music and a story developed. It all kind of happened in an interwoven way. It wasn’t like there was a story and all of it sort of happened in John’s mind,” Seth explained. “As it was built, he really developed the story. Me, him, and Scott stayed in contact. I wrote one new original piece, which was inspired by the story. We kind of worked some of the details to get it to work together as a narrative. It’s a mind-blowing experience to see songs that you wrote, that you have in your mind with a set meaning and set inspiration, and background, and narrative, and then see that song strung along with a bunch of other songs that you wrote, or had a part in writing, and see a whole new story develop out of those words is a mind-bending experience. It’s been an incredible thing.”

So far, Swept Away has only played in California (too far to travel for this writer!) Seth was questioned if fans could ever see this show on Broadway or perhaps on a national tour? He was reminded that Cleveland’s prized Playhouse Square is the second-largest theater district in the United States and would be a great host for a residency.

“There is a chance. I’m taking note of that, for sure, because I think Cleveland would be an awesome place to take it. We’re not confirmed on anything, but there are certainly discussions happening right now to take it to other places or take it on tour,” he revealed. “That would be a great thing and an incredible way of spreading the story and getting other people to experience it.”

This interviewer celebrates The Avett Brothers’ entire catalog. Every album; almost every song. Their concerts are my Christmas Day. In addition to their plethora of original tunes, The Avett Brothers have done a couple of amazing covers, including George Jones’ “The Race Is On” and David Childers and The Modern Don Juans’ “The Prettiest Thing.”

Nothing is more powerful than their recordings of some traditional hymns, namely “In the Garden” and “Just a Closer Walk With Thee.” There is something about the way Scott & Seth deliver these hymns that take me back to my days growing up in a traditional church (before the modern church turned into a theatrical rock concert environment). If for nothing more than selfish reasons, this writer feels like a full album (but I would settle for an EP) of traditional church music would be a marvelous treat. While Seth is on the line, I ran the idea by him!

“It’s always part of our fabric and part of the discussion. We’ve done two records with our dad under the name Jim Avett and Family. Only one of them is available in the streaming world. The more current one has one or both of those songs on there,” he revealed. “The whole gospel song thing is a part of us; part of our raising; part of our understanding. I’m sure there will be more recordings in the future.”

The power of music is mysterious. It can mean so much to so many; so many different things, too; very open to interpretation.

In a ‘mission statement’ about The Avett Brothers’ 2019 studio album, ‘Closer Than Together’ Seth wrote: “The Avett Brothers will probably never make a sociopolitical record, but if we did, it might sound something like this.”

One song on the record that stands out, especially in light of recent tragedies is “Bang Bang.” The song explores the misuse and dangers of guns. While gun rights are currently a highly controversial topic, “Bang Bang” offers a unique perspective on the issue. No matter one’s stance on the Second Amendment, gun holder’s rights, and “the bad guys are going to have guns regardless” argument (all of which hold at least an ounce of validity), only the completely ignorant think that SOME sort of reform is not necessary. Something has to change. A call for such a change doesn’t necessarily have to be a march on Capitol Hill or a letter to one’s congressional representative. It can also come in the form of art (in this case, a song) to help inspire action.

Seth was asked about art being used as an agent to inspire change and specifically the impact of “Bang Bang.”

Seth continued to talk about one of his artistic inspirations.

“I’m reading Hafez, a poet from the 1300s. I would strongly recommend a book to you called ‘I Hear God Laughing.’ I take it with me everywhere I go in my backpack,” he revealed. “It helps me understand what all of this is in terms of both joy and tragedy.”

“As far as the importance of songs, you never know what kind of effect a song, or poem, or movie, or painting, or conversation for that matter, will really have from soul to soul, but I do believe that what is most important is for artists to accept what is and tell the truth in their artwork,” Seth continued. “I wrote ‘Bang Bang’ for people who haven’t thought of things in that way. That isn’t up to me. That is up to God. I just feel my responsibility is to follow the muse and be mindful in the process of sharing or not sharing. That song is meant to keep the conversation going. The bottom line is that a song can be used as a tool to make us feel less lonely. It makes us more open to understanding whatever our struggles are. I wrote that song in light of my own struggles and some people who have heard it have felt less alone.”

The Avett Brothers will perform at Jacobs Pavilion at Nautica on Friday, June 10. Check out the complete show and ticket information on our events calendar: RIGHT HERE!