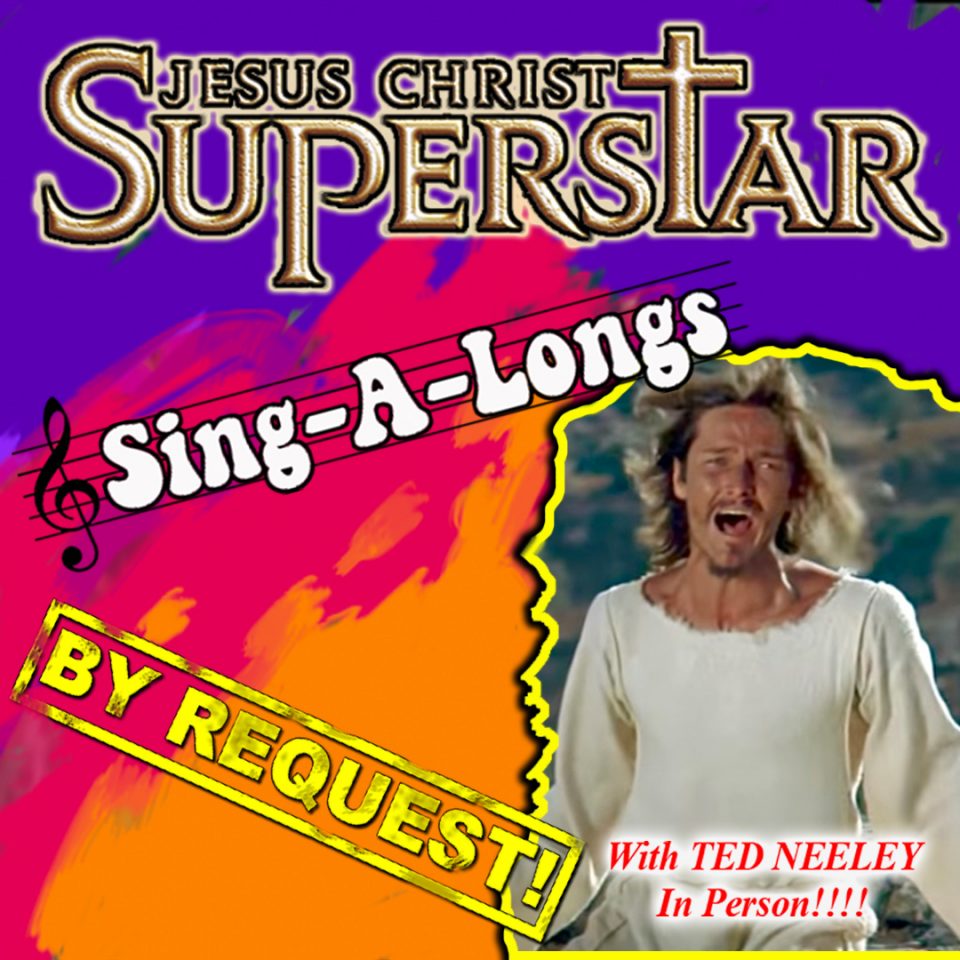 A self-proclaimed “screaming rock-n-roll drummer from Texas,” the incomparable Ted Neeley has played the role of Jesus of Nazareth in the Andrew Lloyd Webber / Tim Rice masterpiece, Jesus Christ Superstar for presumably longer than Jesus walked the earth. (Upon half-hearted research, biblical scholars estimate Jesus was in his early 30’s when crucified; far short of the 45+ year Neeley has assumed the role!)

After being met with both controversy and critical acclaim on Broadway, Neeley was cast in the titular role of the 1973 film, directed by Norman Jewison. Despite performing in what was labeled the “Farewell Tour” when this now-36-year-old interviewer was only 13 years of age, Neeley is still alive and well in his role, having recently completed a five-year-long European production.

Currently, Neeley is touring movie theaters across the country to join audiences in a screening of the original film, dubbed ‘Jesus Christ Superstar sing-a-longs.’ His tour comes to Cedar Lee Theatre in Cleveland Heights on Sunday, December 8. Barring any pre-Christmas miracles or divine Craigslist or BST interventions, you aren’t getting in if you don’t yet have a ticket! Both $15 general admission tickets and VIP packages ranging from $175 – $250 sold out shortly after being made available for sale.

Speaking to CleveRock.com by phone 11 days ahead of his Cleveland appearance to tell us what’s the buzz about these engagements:

“While I was on tour with the play, I thought, ‘My goodness, there are movie theaters everywhere!’ Since this is actually a film, I thought maybe we can figure out a way to do some different sort of thing. Instead of seeing the show live, people could go to see the film with me. We were talking to promoters all of the time about that. That was back in the ’90s,” Neeley recalled. “At the time, the movie had been around for 20 plus years and promoters thought that probably nobody is interested anymore. We got that from everyone. They didn’t think it would sell tickets! The way we made it happen, actually, is that we were in Los Angeles and we were talking to theater people. I took it into the Grauman’s Chinese Theatre to talk to management. It turns out that management were huge fans of the film and they said, ‘Yeah! Let’s do it!’ So we did our first one in Los Angeles and it was just magnificent. Once the people that we talked to across the country saw that we did it there they said, ‘Golly! Maybe we can, too!’ We’ve been doing it ever since.”

Seemingly, one might get bored watching a film they starred in during the ’70s night-in and night-out, but Ted seems sincere when he says he enjoys each and every opportunity to watch the screening with loyal fans.

“When we’re doing the screenings, they are all singing the songs. Some of the people know the songs better than I do,” he said with a laugh. “They sing beautifully. It’s such a wonderful celebration. Some come dressed in costumes of their favorite characters from the film. It’s a celebration every time we do these screenings.”

Did Ted have any inkling that these screenings would do so well in terms of ticket sales?

When Jesus Christ Superstar first opened on Broadway, the show was met with resistance and protests. But Ted knew he could rock the cynics if he tried.

“Back in 1971, we were protested every single night in front of the theater. There was never any violence but they did not want us to go into the theater and do this ‘blasphemous’ piece,” Neely remembers. “We were literally pushing our way through the crowds to get into the theater backstage!”

And honestly, I would say to people, ‘Pardon me, Sir, but have you seen our show?‘

I would say, ‘If you haven’t seen it, Sir, what is it that you don’t like about it?’

I wanted to respond, but I was afraid if I did there would be fights. I would just say, ‘Well, Sir, is there anything else that you don’t like?‘

And I’m thinking, and I wanted to say, but I didn’t, ‘Well, Sir, were you there?’ But I didn’t say that for fear it would start a fight.

‘Would you do me a favor please, Sir?‘

‘Would you come into the theater, as my guest, and watch the show? Then wait for me in the lobby and tell me what it is about the show you don’t like. Maybe we can address that.’

Instantly, the attitude would change. He or she would say:

‘You would do that?’

I would say, ‘Of course! We are here to entertain you; not offend you!’ Those who were courageous enough to step across the threshold of the door and watch the show and then wait for me in the lobby when I would walk out, literally, they would say:

‘We love your show! We’re going to bring back our families to see you next week!'”

And now, while there is a mild divide in opinion amongst Christian churches, the general school of thinking turned from “blasphemous” to “let’s show this in Sunday School.” This is due in large part to the outreach done by the likes of Neeley and Carl Anderson, who played Judas in the original film cast.

“The beautiful thing about it is that the people who were protesting became our promoters. Because of all the protests, there was always media there giving coverage,” Neely said. “It was advertising the show for free! It was incredible!“