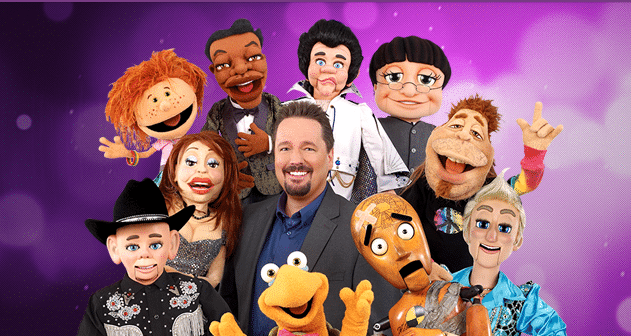 Before he was one of the Las Vegas Strip’s most popular shows, ventriloquist, singer, impressionist and comedian Terry Fator spent 11 months out of the year on the road, doing 3 -5 shows per day; playing mostly schools and fairs. Metaphorically speaking, Fator was the hard working rock band that traveled from city to city, dive bar to dive bar, in a van that barely ran. With a little luck, enough merch could be sold to buy two meals the next day and have enough gas in the tank to make it to the next gig.

Metaphorically speaking, Fator was the hard working rock band that traveled from city to city, dive bar to dive bar, in a van that barely ran.  With a little luck, enough merch could be sold to get two meals the next day and still have enough gas in the tank to make it to the next gig.

In 2007, Fator got his break. He was selected as a contestant on the second season of the NBC reality show America’s Got Talent. Fator emerged the victor, landing him a big pay day and a headline run in Vegas, which is still going strong to this day.

Having spent 20 years performing and even longer honing his craft, Fator was unfairly labeled an overnight sensation.

“I’m not going to say that luck was not a part of my win,” he clarified. “The timing, the fact that I ended up getting a long term deal… That’s because they were looking for a new headliner at the same time I was on America’s got talent.  I’m a religious person. I don’t believe in luck. I believe that God orchestrated it. If you don’t subscribe to my viewpoint, you say, ‘yeah, you got lucky.’ But the 20 years I put into it working on the road 3-5 shows per day, 11 months out of the year, that’s totally different than winning the lottery.”

Fator, who will perform at Hard Rock Live at the Hard Rock Rocksino in Northfield, OH on Sunday, March 5,  says that fans can expect his live show into include impressions of up to 50-60 singers. While it is a one man show, Fator will have you thinking there are plenty of other living creatures onstage with his cast of puppets.

Anyone who caught Terry on America’s Got Talent or has seen his show in Vegas knows exactly what he means. His life-like puppets appear to be performing independently of him. This one of a kind performer takes ventriloquism to an entire new level, then adds his own twist.

“The puppets really do take on a life of their own. I’ve had so many people say ‘I don’t like puppets but I loved your show.’ That’s because the puppets seem like they are real, living creatures,” Fator says. “One of the best evidence of that is nowadays in my show I’m doing more singing without the puppets. I’ll do 6 or 7 songs and do different voices or impressions and people come up to me and say, ‘I didn’t know you could sing.’ Every time I got on America’s Got Talent I sang a song through a puppet. I’m the one doing it! If you leave thinking that I can’t sing but the puppets can, I did my job.”

Terry has bravely integrated a Donald Trump puppet into his Las Vegas show, a risky move considering the mixed (putting it nicely) reception the president has received during his campaign and into his presidency.

” I have fun with the bigness of Trump’s character. I don’t do political humor. I just do things that make people laugh. He’s so much bigger than politics, People ask why I didn’t do an Obama puppet or Hillary puppet,”  Terry said. “My answer is that the only way we know Obama or Hillary is from politics. Trump transcends politics. We know him as a billionaire, real estate mogul, and reality TV star. The routine I wrote, is that whether you love Trump or hate Trump, you will think it’s funny.  Even Trump himself has seen it and thinks it’s funny. It’s one of the most popular things I do in my Vegas show.”

Fator’s hard work is coupled with his natural talents. Terry admits that not everyone is cut out to be a ventriloquist, no matter how hard they work at it.

“Ventriloquism is like being a singer or a painter, you know? You can learn to do pretty much anything you want, but there is only one Picasso,” Fator explains. “I definitely have something different about the way my mouth was shaped, something that allows me to do things…I shouldn’t be able to make the noises and sounds out of my mouth that I can with my mouth closed. It should be impossible. But for some reason, I can. It’s a gift I was born with.”

Terry says the important questions all boils down to, “Are you just going to sit around and enjoy your talents or really turn them into something great?”

Fator tells CleveRock that he always had confidence that he would have a successful show one day. (Adding that “it wasn’t cocky; it was confidence.”)

Even after years of trying with minimal yield (by showbiz standards, at least), Fator was discouraged. Somehow, he still managed to keep his head up.

“It was very sobering for me when I hit 40 and I realized it hadn’t happened yet,” Fator recalls. “I knew that there was a talent there and that I had gifts and abilities that other people around me didn’t. And I knew sooner or later that it would click.  I came to that realization that maybe it wasn’t going to happen.”

Fator persevered, and it paid dividends. Terry has not forgotten his roots and delivers each show with poise and passion.

“Every single time I get onstage I feel this overwhelming sense of gratefulness. I love being able to do what I do. It’s just incredible to be able to do it. I have not lost that in 20 years since I saw that movie. Amazingly, things really changed. I didn’t realize how big things had changed until I signed the big deal in Vegas.”

After all, it’s pretty hard not to notice things have changed when one drives down the Vegas Strip and sees their own mug on a giant Billboard. Oh, and money. Lots of it. (It comes with the territory!) Many artists and other celebrities have told me over the course of the past 15 years that “it’s not about that money.” The difference is, when Terry tells me this, I sincerely believe him. To Fator, it’s about finally having the resources to put on the show he always dreamed of and a packed audience on hand each night to enjoy it.

“I think if you can’t laugh, you lose the main joy of living,” Fator said.