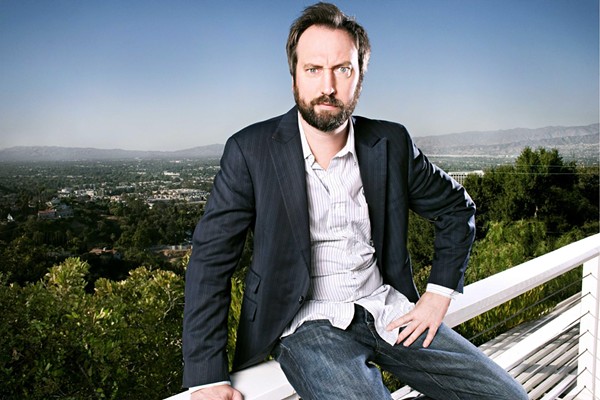 Talk show host, actor, Canadian immigrant, former employee of Donald Trump, one-time husband of Drew Barrymore, rapper(?), and payer of a $200 late fee on a VHS rental, Tom Green has worn many hats over the course of his career in show business. He will be sporting his stand-up comedian cap this coming weekend with gigs at Hilarities on Friday, April 22 and Saturday, April 23.

“I tour all over the world and I definitely have a great time everywhere I go, but Cleveland has been particularly great and I always have amazing shows there,” Green said during a recent phone interview. “Hilarities is such a nice club and we always have such a great time there. I’m really looking forward to coming back. I love my fans in Cleveland so much.”

Tom began his entertainment career doing stand-up comedy in his native Ontario, Canada. He was the creator and host of The Tom Green Show, which began on a public access station in Canada before eventually airing on MTV from 1999 – 2000, ceasing production when Green was diagnosed with testicular cancer (which was documented in a 2000 MTV special titled The Tom Green Cancer Special). He also starred in movies including Freddy Got Fingered (2001) and Stealing Harvard (2002). While he keeps busy with other projects, over the past several years Green has concentrated on his stand-up act.

“After having done television talk shows for a number of years, I realized that I liked doing stand-up more than I liked interviewing people. I like being on stage and getting the laughs; telling jokes; interacting with the crowd,” he said. “It’s a high-energy show. I’m pushing the boundaries of getting fans to laugh as hard as they can.”

Green says that it is the ability to see the instant reactions from the audience that he enjoys most about stand-up comedy. “It’s the main thing that I love. You have the energy of the crowd. I have fans that are so supportive of me and so many fans out there that have fond memories of the stuff that I was doing before I was doing stand-up, who remember me from The Tom Green Show and the movies.”

Tom comes through Cleveland on a near-annual basis, which requires him to keep his act fresh each time through town. Coming up with a lengthy set of new material is no easy task for any comedian, but Green is up to the challenge.

Green says advance ticket sales are looking good, even for Friday, when he goes head-to-head with game 3 of the Cleveland Cavaliers playoff series with the Detroit Pistons. Tom is no stranger to competing with basketball drama in Cleveland. While in town performing in 2010, LeBron James’ infamous ‘decision’ coincided with Green’s stand-up performances in town. The comedian captured Clevelanders’ reactions and his insightful commentary for a YouTube video (that unfortunately, is no longer available).

“It was very vibrant. I was out with my friend and we had a video camera with us. We were making some videos for my web show and everyone was on the edge of their seats in anticipation, then clearly disappointed when he decided to leave,” Tom recalls. “I think there’s a lot of people in Cleveland trying to un-burn their jersey right now.”

While this writer could usually not care any less about a comedian’s take on political or social issues, Green personally once worked with presidential candidate Donald Trump, is an immigrant, and a former talk show host, making his take on the 2016 election circus relevant.

“I was fired by Donald Trump. He was my boss on Celebrity Apprentice. He fired me the night I went out drinking with Dennis Rodman when I was the project manager,” Green explains. “I actually liked him at the time. Even when he fired me, I thought it was funny. But as far as him running the country and dividing people up by who they are, what they look like; where they are from, that bothers me.”

“I think there is a lot of media manipulation going on. Everyone is trying to get that rating; trying to get those viewers. When you have a candidate that says divisive and shocking things, that aren’t necessarily the most presidential things to say, that basically ends up drawing so much attention to that person, people can’t help but think that this is the person they are supposed to vote for,” he said.

“I honestly think the media has to look at itself and the way they have created this phenomenon,” Green continued. “I honestly think there should be more laws passed that are more in line with equal time laws. Any time a political candidate is on TV, every candidate running against him should be given equal time. There is this desperate desire for ratings on the part of the new media and the television stations, that they’ll just put Donald Trump on air all day and people can’t help but get brainwashed by it.”

And for those living under a rock as of late, Green has made national headlines in recent weeks by helping a North Carolina resident pay a fine for failing to return a VHS copy of ‘Freddy Got Fingered’ over a decade ago.

“I just assumed the case would go away. I surprised the guy with a phone call and said ‘Daddy, would you like some sausage?'” Green said laughing about the reference he made to a line from the film that was also used in the movie trailer. “I helped him out by paying the fine. It looks like bureaucracy out of control.”

Tom Green will be performing at Hilarities Fourth Street Theatre on Friday, April 22 at 7:30pm & 10:00pm and Saturday, April 23 at 7:00pm and 9:30pm. Complete show information and ticket purchase links can be found on our event calendar, RIGHT HERE!