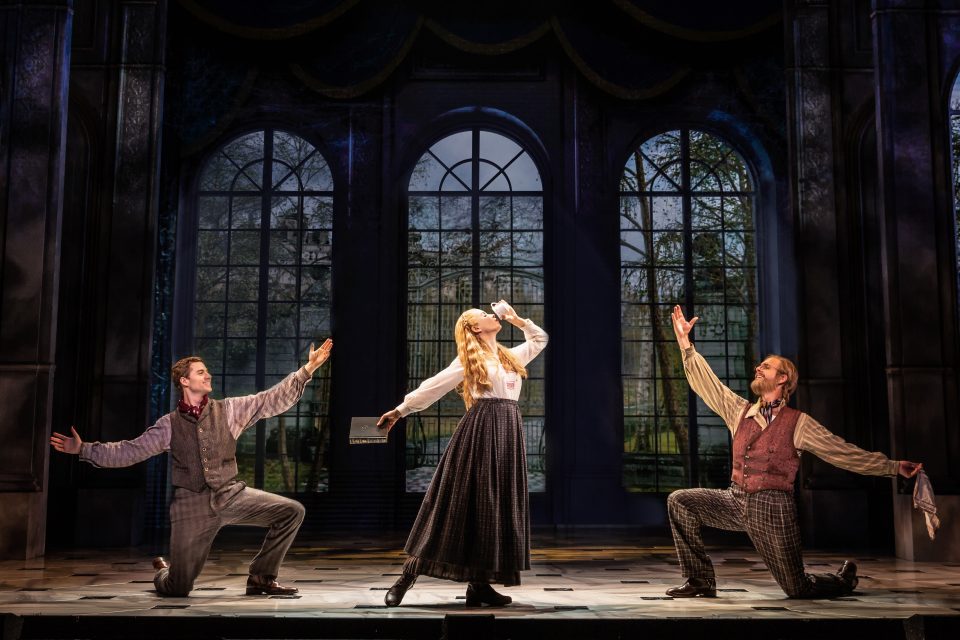 Once upon a December, a remarkable story of family, friendship and a young princess named Anastasia made its way to the Connor Palace Theater in Cleveland! The Broadway-hit Anastasia tells the story of Anya (Lila Coogan), a young girl living in the 1920s Russian Empire as she sets out to discover the mystery of her past. Pursued by a ruthless Soviet officer determined to silence her, Anya enlists the aid of a dashing conman, Dmitry (Jake Levy), and a lovable ex-aristocrat, Vlad (Edward Staudenmayer) to help her get to the dazzling city of Paris and learn the truth about her life.

The show began by dazzling audiences almost instantly with a gorgeous set and stunning costumes. The Russian Royal Family, the Romanovs, were clad head to tow in jeweled, sparkles and all things shiny. However, the beautiful scene of fun, glamour and dancing quickly went dark as explosions were heard and armed guardsman entered the scene. The scene cuts to a despaired Dowager Empress (Joy Franz) slumped over a letter, proclaiming her entire family was gone. Dead.

Despite such a somber beginning, the show continued on with high energy and lots of smiles and laughs from the audience. Dmitry and the fellow townspeople tell us of “A Rumor in St. Petersburg” that the princess Anastasia survived, and her grandmother, Dowager Empress would pay a hefty reward to whoever helped find her and reunite the two. Dmitry and Vlad devise a plan to train a girl to know the entire history and every detail of the Romanov family so the Empress believes the girl is Anastasia. It’s a ticket out of Russia and a hefty reward waiting at the end.

The duo meets Anya, and she must quickly “Learn To Do It” to convince the Empress she is, in fact Anastasia. It is in this number that that audience was first stunned by the power of Coogan’s voice and she belted out the facts Anya must learn to be a princess. Coogan captivated the audience every time she was on stage through her stunning voice, adorable charm and beautiful acting.

As if Coogan’s portrayal of Anya wasn’t stunning enough by itself, Levy by her side as Dmitry was the perfect compliment. Their duets of “My Petersburg” and “In a Crowd of Thousands” mesmerized the audience and truly brought the magic of the show to life. It is hard to believe this was Levy’s first National Tour debut and we can surely expect to see him on numerous other tours in the future.

The other duo that stole the show was Edward Staudenmayer as Vlad and Alison Ewing as Countess Lily. The two performed “The Countess and The Common Man” and had the audience in stitches with laughter. Their hilarious, over the top gestures were so fun and hilarious to watch and the audience loved every second of their crazy antics.

Of course, even villains can get an honorable mention when they perform as well as Jason Michael Evans as Gleb, the Russian military officer who is out to stop Anya from telling anyone she might be Anastasia to ensure the military remains in control in St. Petersburg. Michael Evans stunned the audience with his powerful voice during the song “Still” as he contemplated what he must do about the princess.

Not only was the cast of the show stunning, but the set was as well. This show used more screen projection than any other show in the recent KeyBank Broadway Series, but it allowed for stunning quick-change backgrounds and didn’t distract from the story one bit. The use of digital screen backgrounds allowed for the use of fewer set-pieces, progressing the show along quickly. However, this is still a Broadway show, so some of the set pieces included a massive train carriage, beautiful palace doors, and a theatre box to overlook a stunning performance of a ballet, just to name a few.

Shows at Playhouse never disappoint, and Anastasia is no exception. The show runs from February 4-23 at the Connor Palace and tickets can be purchased RIGHT HERE. Make sure to embark on a journey to the past before it’s too late!