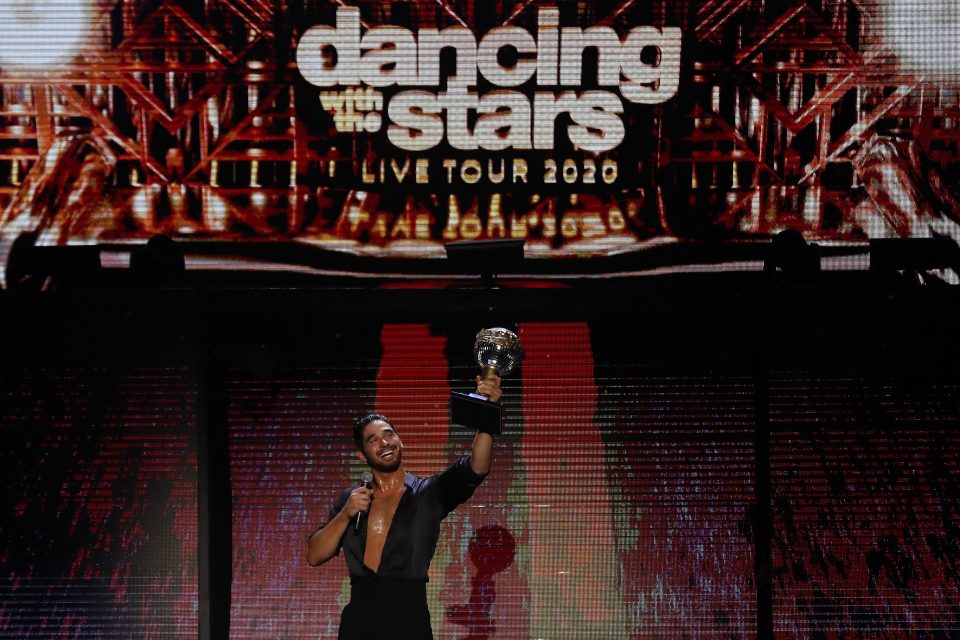 The ABC show Dancing With The Stars -2020 Live Tour performed an outstanding show at the Akron Civic Theater on February 4. In addition to the professional dancers, the show featured spokesperson/host-actress Kate Flannery, who was a celebrity contestant on 2019 (Season 28) edition of Dancing With The Stars!

Moments prior to the show opening, the stage appears as a simple two-level platform with two sets of stairs leading from the outside top level to the lower level center. The front of a late 50s car fills the upper-level backdrop using stage-width LED displays. These displays cover the rear of the entire lower level as well creating a multitude of backdrops; geometric shapes, colors, and architectural figures. Each style is keyed to complement the dance theme or story the dance is telling. The PA system is plenty powerful, rivaling live music performances.

An eleven-member professional dance ensemble, five ladies and six gentlemen from the DWTS TV show provide an amazing performance displaying several different dance styles. In addition to Cha-Cha, Waltz, Tango, and Foxtrot, several contemporary dances are performed. At some points of the show, dancers are literally in the air in these highly choreographed sets.

The show is divided into two acts with an intermission. The first half was based on cruising down the highway with much of the music based on the early days of ‘cruising’ music. Hits like Martha and the Vandellas “Heat Wave” and Dick Dale’s “Miserlou.”

The second half of the show the genre expands with an instrumental version of the Doors “Riding on the Storm” and The Eagles “Hotel California” along with other music like the hit dance-pop song “Sing it Back” Moloko and old favorites like Frank Sinatra’s “Fly Me to the Moon.” Literally dozens of songs make up the musical selection so there is something for everyone.

In addition to the dance, the show engages the audience. Chmerkovskiy spoke from the heart to the audience, thanking them for fan loyalty. The male dancers also selected ladies from the audience to bring to the stage to receive a personal performance. The audience really enjoys the engagement of the dancers.

This show is for everybody that appreciates outstanding dance to great music. Even if you have never seen the ABC show Dancing With The Stars or don’t fancy yourself a fan of dance, you will still enjoy this very engaging show.

Enjoyed the show? Missed the show and want an even more engaging way to check out Dancing With The Stars? How about a tropical getaway to the Bahamas as a two-for-one!

This trip of a lifetime starts on May 29, 2020, and offers an all VIP vacation filled with a one-of-a-kind live theater dance show featuring the most memorable dances of all time, celebrity and dancer photo opportunities, pool parties with the stars, a DWTS costume exhibit, Q&As, one-on-one dance lessons with the world’s greatest professional dancers and much more!

Complete info on the trip can be found: RIGHT HERE!