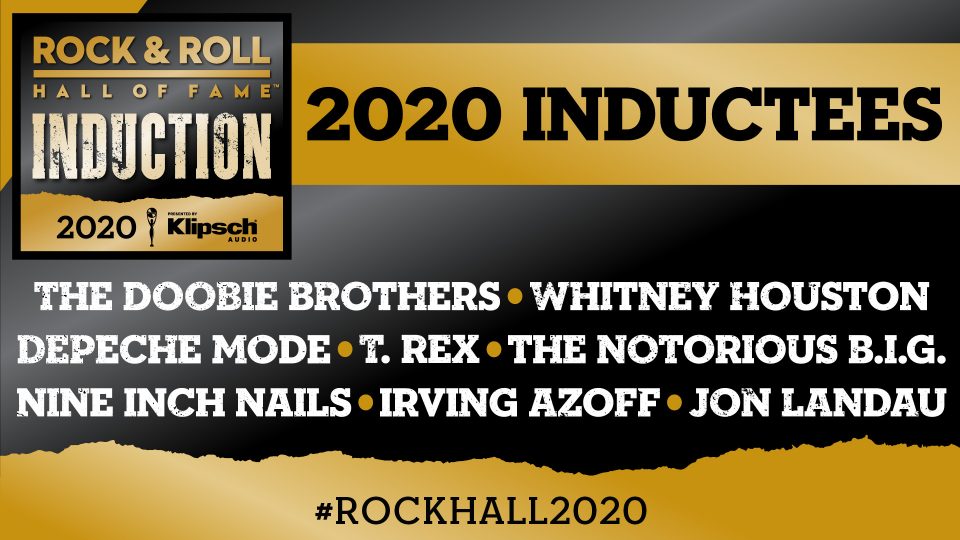 The Rock and Roll Hall of Fame: a true Cleveland treasure! The museum has over half-million visitors stroll through its glass doors annually. The museum is celebrating its 25th year here in Cleveland, accentuated by its largest exhibit yet (PLAY IT LOUD!) and many more exciting just-announced happenings coming in 2020! (Details posting to CleveRock soon!)

In addition to the obvious benefit of the museum being housed on the shores of Lake Erie, one special event that the Rock and Roll Hall of Fame brings to Cleveland every other year is its induction ceremony! Until 2009 the Induction ceremonies had not been available to the public, but that year, a new trend started that brought the ceremony back to Cleveland every third year. Then, in 2018, it was announced that Cleveland would host the ceremony every other year! (Although a recent changing of the guard in Chairman that sees longtime Rolling Stone editor John Sykes now occupying the role may see Cleveland’s bi-annual ceremony status in jeopardy, as Sykes, prior to taking over on January 1 of 2020, already expressed interest in a Los Angeles Times interview in doing “a lot more in California, because it is a cornerstone of the music business.” Time shall tell!)

This year’s ceremony, scheduled for May 2, 2020, is fast approaching. The list of inductees were officially announced earlier this month. (Aggresiouly omitted was Fan Vote winner and ever-so-deserving Dave Matthews Band!) All in all, a deserving class (as always!) As Cleveland readies herself for the bright lights to shine upon her for the ceremony, there is no question that the event will be first-class, as always!

One lingering question, however, is how in the world the nominees were selected, and how the Rock Hall powers-at-be vote on the inductees. Adding to the confusion, of course, is one-million tallied fan vote leader Dave Matthews Band and runner-up Pat Benatar were both omitted from the class of 2020, raising eyebrows as to what the purpose of the fan vote even was. (Although it was worth noting since the fan vote was instated in 2016, DMB is the first vote-topper to not be inducted.)

CleveRock set out to find out how exactly the eight inductees were selected! Nobody questions why these eight artists were chosen (except for the close-minded genre pigeon-holers) because their careers speak for themselves, but how they were selected is a mystery that needed to be solved. CleveRock was granted the pleasure of speaking with John Goehrke, Director of Fan Engagement and On Stage Experience, to provide clarification on the entire process.

Goehrke touched on the nomination process, the voting process and, of course, the controversial fan vote.

Before delving into the insider baseball, Goehrke describes his role at the Hall of Fame:

“I’m part of the team that oversees people’s entire guest experience here in the Rock and Roll Hall of Fame. We think every day about the fans all over the world who come and experience our exhibits, but particularly, our fans interact with all of our staff, so it’s important that our exhibits are powerful and really informative,” he said. “Rock ‘N’ Roll has always been about the connections that we make together. We’re always just thinking about what creates the best most dynamic engaging experience for our over 550,000 fans who came through the museum [this past year] from all over the world.”

He went on to describe that the Rock Hall is unlike any other museum. Staff refers to museum visitors as “fans” as opposed to “visitors,” “guests,” “customers,” “tourists” … Because they are just that: FANS with a strong appreciation for music; not your typical museum-goer.

When the 2020 nominations were announced, there were some who felt that the inductee net was cast a little wider than in past years. Most notably, Whitney Houston (widely considered R&B) and The Notorious B.I.G (who falls under the hip-hop umbrella) might be considered by purists as “not Rock ‘N’ Roll.” Others have felt that this year’s list is on par from previous selections, where many other non-traditional “Rock” artists such as Run DMC (class of 2009) and Grandmaster Flash (class of 2007) have been voted in.

“We always say Rock ‘N’ Roll has not been only one ‘thing.’ If you think of it in one way then we try to have that conversation to make you think a little bit bigger. If you go back to the 50s, even the 60s, you have Motown, the British Invasion, Psychedelic Rock; everyone considers that part of Rock ‘N’ Roll. Nobody ever questions why Marvin Gaye or Smokey Robinson or Aretha Franklin are inducted,” Goehrke explained. “To us, Whitney Houston makes absolute sense because she’s in the same spot as these voices of a generation. When you hear that voice, you automatically recognize it. It’s powerful and influential. I actually can’t imagine a Rock and Roll Hall of Fame without Whitney Houston. It would feel oddly exclusive. Rock ‘N’ Roll has never been exclusive. It’s always been inclusive and making people feel welcomed. That’s what Rock ‘N’ Roll did way back when Elvis Presley and Little Richard performed in the 50s. So we want to keep honoring that mantel.”

After Goehrke’s take on the diversity of this year’s inductees, it was time to get into the nitty-gritty! How do the artists get nominated each year? What does it take to be eligible for nomination?

Goehrke said that first and foremost, the artist had to have recorded and released their first works at least 25-years prior to even be considered for nomination. (No exceptions!)

Aside from that simple requirement, it is up to a mysterious committee, comprised of industry professionals, executives, journalists, and musicians. The nomination committee members were “”appointed” by the Rock Hall’s Foundation.

“There is a nominating committee that is comprised of about 30 to 40 people. Each of these people needed to make a case for who they believe should be nominated. These people, who are kind of steep in the history of Rock ‘N’ Roll, who have quite an understanding and respect for all the different sounds of Rock ‘N’ Roll, who are very thoughtful in all the different lenses of music in Rock ‘N’ Roll… It’s their job,” he explained. “They get together and choose, out of all the eligible bands, who they want nominated. Usually, 10 to 20 names are put on the ballot for the class and then taken to the voting body. This year there were 16 nominees, a really impressive ballot for this class, and once the ballot is determined it goes out to our voting body.”

The voting process has been almost as allusive as the nominating process. Who gets to vote? How does the fan vote count? Can previous inductees vote?

“There are about one thousand voters all over the world,” he revealed. “All living inductees get a vote! Journalists, executives, musicians all do as well. So Joan Jett gets to vote; Mick Jagger gets to vote; the guys from Green Day get a vote, which is pretty cool.”

So what does that mean about the fan vote? Something that all fans casting votes should keep in mind is that the sum of all votes counts as one single vote in a pool of over 1,000 tallied. The one million-plus votes that DMB received counted for less than .1% of the total calculation.

The important part of the fan vote isn’t necessarily the math behind it, but rather an opportunity for fans to support their favorite artist nominated.

“A great example is T. Rex. [Frontman] Marc Bolan passed away 40 years ago. So T. Rex hasn’t been a band in several generations,” he explained (specifically to accentuate why a top-touring act like DMB or Benatar have a significant advantage over posthumous acts). “They don’t even have a social media account.”

Disappointing as it may be to those who were amongst the vote casters for the top two, it does (somewhat) level the playing field for artists from early generations.

Nominees not selected for induction are certainly eligible to be nominated again in future years. However, it’s no guarantee that they will. It’s up to the nominating committee to decide if an artist is worthy to be put up to another vote. Though there are thousands of artists eligible and not nominated, there are also artists who have been nominated multiple times, including some in the class of 2020.

Goehrke wants fans to remember that the Rock and Roll Hall of Fame is different than many other halls of fame or awards that people receive. There are only eight people who make it in every year.

“We always try to strive to increase that clarity or the process, but it’s always helpful and we’re always happy to give you clarification. For example, it’s not based on how many Grammy’s or #1 hits you have. If it was, a group like T. Rex wouldn’t have stood a chance just based on popularity. That’s why we ask the voters to think about things beyond popularity,” Goehrke concluded. “It’s things based on influence and impact; musical excellence. Frank Zappa had one top 40 hit; so did the Grateful Dead. The Velvet Underground didn’t sell any records. Yet all three of those acts are unbelievably influential and innovative and if you’re a fan of Rock ‘N’ Roll music, you can’t even argue against that point. They get inducted for their innovation, impact, and influence.”

The induction ceremony is May 2, 2020, at Public Auditorium in Cleveland. An extremely limited amount of tickets will be open to the general public on Thursday, February 27 at 10:00 AM. Rock and Roll Hall of Fame members who purchase a membership prior to January 31 are eligible for a non-guaranteed, limited pre-sale on February 25. In the very likely event that you don’t score tickets, the ceremony will be broadcast live on HBO.