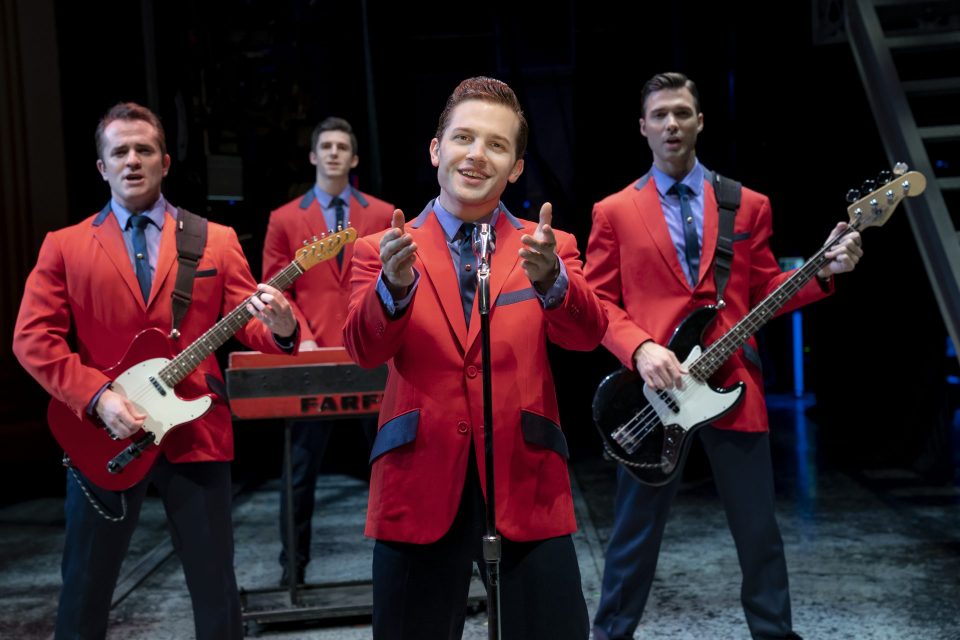 Jersey Boys, the Broadway smash that tells the story of Frankie Valli and The Four Seasons returned to Cleveland’s Conner Palace Theater at Playhouse Square on January 21 for a six-night; eight-show engagement.

This is the sixth time Jersey Boys has come through Playhouse Square, with a particular run spanning more than one month! Despite all of these previous shows, newcomers and longtime fans of the show alike are coming out in droves to fill seats.

Inspired and heavily-used tunes popularized by Frankie Valli and The Four Seasons, the show’s music by Bob Gaudio and lyrics by Bob Crewe have extended Valli & Co’s legacy.

The set of the show is tricky to describe, as it is simultaneously simple and complex! At the opening of the performance, there is nothing but a two-story scaffold resembling a New Jersey street corner.  As the show progresses, lighting, digital backgrounds, and cast members sliding different set pieces transforms the ‘simple’ stage into an amazing set.  A simple street corner turns into a recording studio, a bowling alley, night club, and eventually, the Rock and Roll Hall of Fame induction stage!

The show is appropriately divided into four parts (“seasons,” if you will), each part narrated by one of the Four Seasons’ members, who give their unique perspective on the group’s history and music. An impressive total of 33 songs are performed, some in snippets; others complete. The music is intertwined with the story chronologically, providing the audience with a clear storyline.

The story begins with the group as a trio and later, through some member changes, to a quartet. While a trio, the band recruited frontman Frankie Castelluccio, who later changed his name to Frankie Valli. Several band names were also used with some suggestions supplied by a young man by the name of Joe Pesci (Yes, THAT Joe Pesci!)

One night, the quartet was standing in a parking lot of a bowling alley. A neon sign behind that once illuminated to read “our sons” in front identified the bowling alley was now properly illuminated as “Four Seasons.” The name stuck!

The touring production’s cast consists of four immensely talented musicians. Jon Hacker, an Ohio Boy (Cincinnati, to be precise) before he was a ‘Jersey Boy’ stars as Valli. Hacker was previously employed in other roles in the Broadway production prior to its final curtain in 2017, before taking the lead in this touring production.

Corey Greenan plays Tommy DeVito who is the primary instigator in the group; always fighting to maintain control of the Four Seasons Eric Chambliss plays Bob Gaudio who is the lead creative member who prefers to write but is now performing as well and partners with Frankie as the primary writer. Michael Milton‘s character, Nick Mass, first appears reluctant as a performer before coming out of his shell.

The show travels through all of the ups and downs of the Four Seasons. As members leave it became clear that Frankie Valli was not only the lead but the one who would keep the songs alive as he becomes a solo show. The musical shows first hand the personal triumphs and low points that Frankie has gone through, all culminating to a huge full band reunion at their induction to the Rock & Roll Hall of Fame in 1990!

The sound of the live band was superb. The orchestra pit was closed up, giving room for the on-stage band to be the instrumentalists we all enjoy throughout the night.

The actors started the show wearing traditional hands free mics but later integrated handheld performance mics in their ‘performances’ as The Four Seasons. A little touch that was much appreciated, adding realism to the performances substantially creating a magnificent sound that generated goosebumps.

It is clear why fans keep seeing this show over and over every time it comes to Cleveland. Songs like “Sherry” and “December, 1963 (Oh,What a Night)” brought a wave of nostalgia over audience members and had them beaming as the Four Season sang. “Walk Like a Man” and “Big Man in Town” had the audience dancing and swaying in their seats. It was as if we were all back in the 1960s hearing the Four Seasons for the first time.

Oh, what a night!

Jersey Boys is at Connor Playhouse Square through January 26. Tickets can be found HERE