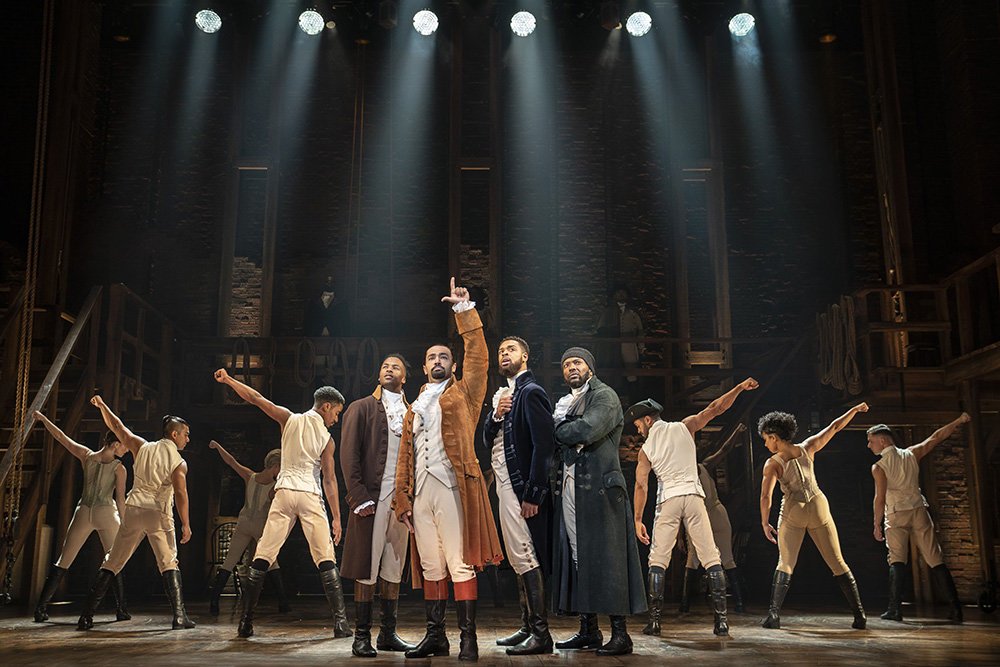 Sick of saying “Happy Holidays” year after year? Clevelanders now have the option of greeting each other with “Happy Hamilton,” at least in the vicinity of Playhouse Square. After all, are we not happy that the play is in town for the duration of the holiday season?

The Tony Award-winning masterpiece by Lin-Manuel Miranda, which follows the life of founding father Alexander Hamilton, became an instant phenomenon upon its Broadway debut in 2015. Too often, this reviewer finds himself disappointed by over-hyped entertainment pieces. Nothing could possibly be as hyped up as ‘Hamilton,’; nothing could have not only met but EXCEEDED said hype the first time I saw ‘Hamilton’ in 2018!

Fast forward to December 2022, ‘Hamilton’ has made its triumphant return to Cleveland (with performances through January 15). There are currently three touring versions of the production, with the ‘Phillip Tour’ cast arriving here in Northeast Ohio. It goes without saying that no performer earns a spot with ‘Hamilton’ unless they ooze with talent. Collectively, this troupe is as top-notch as I have ever witnessed in any production. It is nothing short of a miracle that the stage didn’t collapse trying to support the weight from all of the talents it is holding.

For the uninitiated, ‘Hamilton’ tells the story of the country’s founding fathers, highlighting the influences of polarizing historical figures including Thomas Jefferson, Aaron Burr, George Washington, James Madison, and even King George III. (And, of course, the play’s namesake Alexander Hamilton!)

Often described as a HIP-HOP musical, that label is somewhat lacking in accuracy. Sure, most of the numbers have a strong beat to them, fast-moving dialog, witty rhymes, and clever timing. But, as a Popular Music critic by trade, it’s difficult to pigeonhole these tunes as HIP-HOP. The show also contains many traditional powerful vocal numbers that are on par with most popular musicals. For those not hip to the HIP-HOP, don’t be scared to give ‘Hamilton’ a try.

The show beings abruptly. After a (very) minimal pause after the houselights go down and without an overture, the booming early notes welcome Aaron Burr (Jared Dixon), who sings the opening stanza, followed by the other top-billed members of the cast and eventually the ensemble, who trade off lines that basically spoils the entire story of the play (including the bombshell that Burr is the “damn fool” that shoots Hamilton near the end.) Traditional theater etiquette is partially discarded (as it should be for this particular show) with raucous cheers to the opening notes and upon the entrance of select cast.

Alexander Hamilton’s first big number, “My Shot,” immediately showcases the skills of Pierre Jean Gonzalez in the titular role. He sings of being “young, scrappy, and hungry” and declares he is not throwing his shot. Immediately, it is clear that Gonzalez interprets his character differently than his predecessors, including role originator and show creator Lin-Manuel Miranda. He made the character his own with different mannerisms and voice inflections; not at all trying to mimic nor imitate Miranda’s stylings.

The Schuyler sisters, daughters of Senator Philip Schuyler, were introduced early on. Eliza (Nikisha Williams), who would marry Hamilton later in Act One, alongside Ta’Rae Campbell in the role of Angelica, dazzled from the moment they took the stage. Williams’ powerful vocals, at minimum, equaled original cast member Phillipa Soo, and she had one of the most impressive performances in Act Two with “Burn.”

Early Act One highlights include a performance from Neil Haskell in the role of King George. The audience-favorite performance of “You’ll Be Back” had almost everyone laughing out loud at the cleverness of the lyrics and Haskell’s knack for both overt and subtle comedic shenanigans. Haskell would return for two more numbers later in the show which drew equally hearty laughter.

Also in Act One, we are introduced to Marcus Choi in the role of George Washington, who showcases his pipes on “Right Hand Man” and later in Act Two with “One Last Time.”

Showstopper “Yorktown” features several of the leads and left audience members’ hearts pounding. It’s darn near impossible for this writer to pick a favorite song from Act One, but this definitely receives an honorable mention (at the very least).

Act Two begins equally as abruptly as the start of the show, with some patrons still scurrying back to their seats when the cast returned to the stage.

The true show-stealer of this performance of ‘Hamilton’ is Warren Egypt Franklin, who played the role of Marquis de Lafayette in Act One and returned as Thomas Jefferson in Act Two. He kicked off Act Two with “What’d I Miss,” which showcased his versatility with his ability to switch characters on a dime.

The 2015 graduate of Cleveland Metropolitan School District made his hometown proud. While attending Baldwin Wallace University, Franklin took a trip to see the original Broadway cast in New York City and was fortunate enough to have backstage access after the show. When face-to-face with Lin-Manuel Miranda, he prophesized that he was going to play this role in ‘Hamilton’ once he graduated. Miranda told him to keep his vigor. By golly gee whiz, his dream came true!

Franklin turned to the small screen in a recurring role on the Hulu series Grownish during the pandemic shutdown prior to rejoining ‘Hamilton’ upon theaters reopening. At 25 years young, this Northeast Ohio native is only getting started. Mark my words: bigger and better things are to come for Franklin.

Other than the aforementioned “Burn” and “One Last Time,” the award for the top highlight of Act Two is given to “The Room Where It Happens.”

‘Hamilton’ gives insight into both the good and nasty sides of the founding fathers. Infidelity, blackmail, backstabbing, and collusion all take place in Act Two. Set at the beginning times of the United States, it seems as though the early leaders, Hamilton included, set the tone for politicians’ behaviors from then to the present day! (Am I wrong?) Alexander finds himself caught in a love affair, which leads to all sorts of trouble for him and kills his chances of ever becoming president.

The creative set design, complete with folding staircases and a rotating circle (Lazy Susan style) in the center of the stage helps characters seemingly move as quickly as the dialog. The rotating centerpiece is especially effective during one of the show’s final scenes where Hamilton meets his end during his still-talked-about duel with his friend-turned-foe, Burr.

The performances are so great in this show that the costume design and choreography, which would be standouts in any other show, seemingly are taken for granted by most theatergoers. Speaking of being taken for granted, my goodness, what can be said about this troupe’s ensemble? The strong vocal performances and dancing are also overshadowed, but not lost on this reviewer. It won’t be long before these performers deservingly land named roles.

Bravo to this incredible show! Don’t throw away your shot to be in the room where it happens. Limited tickets remain for performances through January 15.