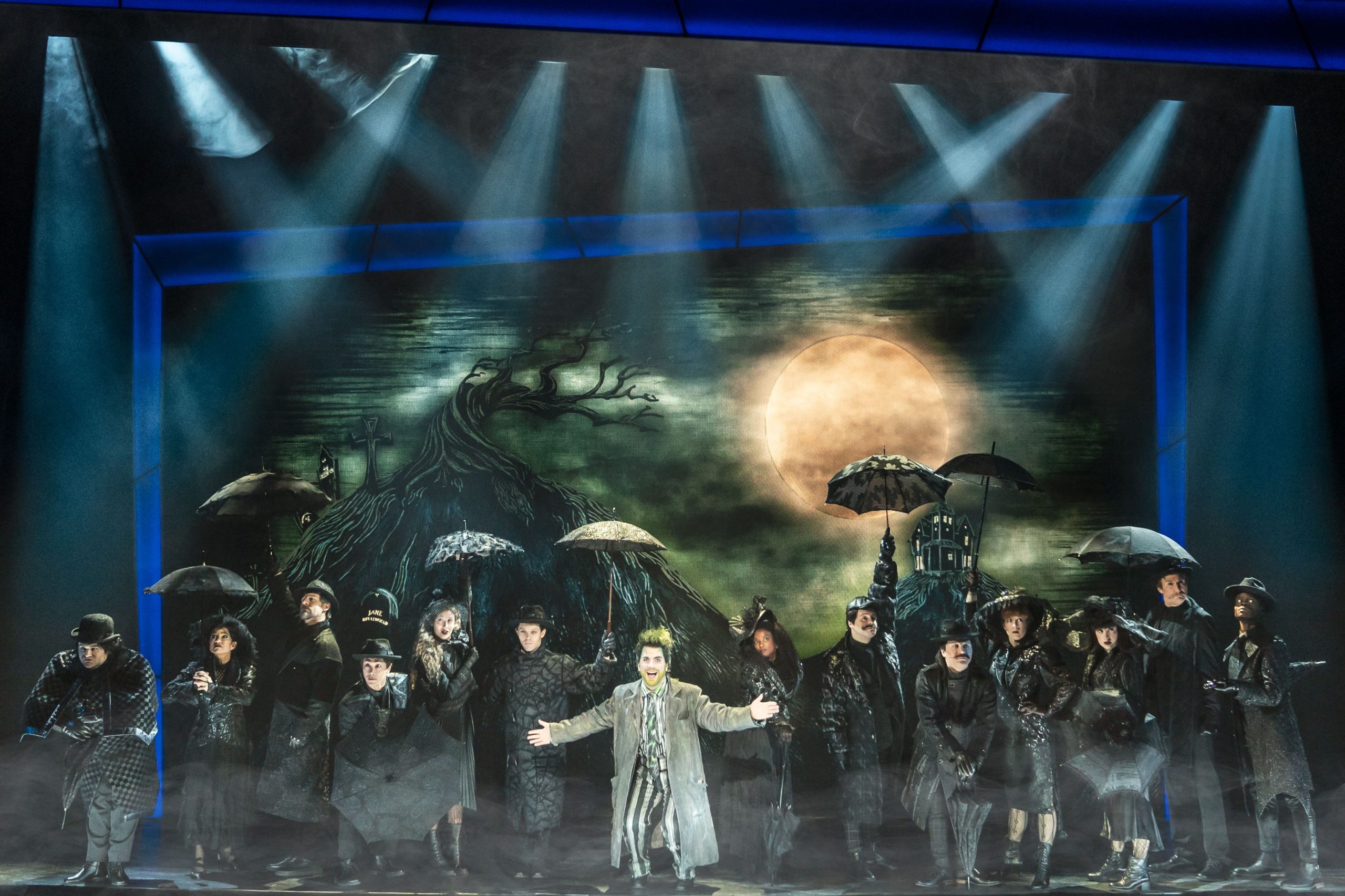 Guilty as charged. This writer has never seen Beetlejuice. Not the Tim Burton film; the animated television series; the musical; nodda! (I may be a little bit lost when the show rolls into the Connor Palace Theater at Playhouse Square January 10 – 29!)

The show has had nothing but rave reviews and tickets are moving quickly for the Cleveland engagement.

We spoke with ensemble performer and Beetlejuice understudy Lee N Price (a proud graduate of Northeast Ohio’s Baldwin Wallace’s Musical Theater program), to get the scoop on the musical’s upcoming run in Cleveland.

“Beetlejuice The Musical is amazing,” he exclaimed. “It does a great job of paying homage to the original film without copying it in its entirety. Lots of fans of the movie will be able to come see the aspects that have grown from the movie and the adjusted storyline. Fans of musicals have always been able to watch the movie and enjoy it just as much. It’s one of those musicals that really transforms the story but still honors the original.“

For the uninitiated (including this writer), Price was asked to explain the show’s plot (sans spoilers):

“The musical focuses of the deceased family of the Maitlands and they call on Beetlejuice to haunt their former house and its new residents. It follows the Deetz family and we quickly learn that our story revolves around Lydia and how she mourns the loss of her mother, and how her father wants to move on,” he explains. “We quickly learn about Lydia’s relationship with Beetlejuice and how they are both stressed; just two people; one person; one demon ghost that just feels invisible and wants to be seen. I’ll leave you with that because then craziness ensues and there are big flashy musical numbers and you take a trip to The Netherworld. Everyone who sees it will feel so happy and refreshed. You’ll laugh. You might cry. You’re going to have an amazing time.”

Price has made me interested in this show. I’m even more curious to learn the full story now!

Every actor has a moment in their show that they love to see the audience react to. Price answered quickly when he was asked about his favorite number for the audience to enjoy.

“My favorite number in the entire show is ‘What I know Now.’ It’s halfway through Act II when Lydia and Charles take a trip to The Netherworld. You meet all of these classic characters, some of which are derived directly from the film,” he said. “You hear hardcore fans of the movie react in the audience when they see these characters. You see them come to life and they basically sing about if they knew then what they know now, how different things would be. It’s fun for the audience to hear that number. It’s an amazing time. I have the most fun with that every night.”

“Another number in the show is ‘Day-O,'” Price continued. “It is very similar to the movie. Right at the beginning, People start cheering instantly. It reminds you of how many people love the movie and musical. It’s great being in a show that has so much love around it.”

As mentioned at the top, Price is a graduate of Baldwin Wallace University’s Musical Theater program. It seems that every show that comes to Playhouse Square has a BW program alumni as part of the show! Like every BW graduate I have talked to, Price could not say anything but wonderful things about his education.

“Baldwin Wallace has one of the top musical theater programs in the country. I got admitted to the program and it was then a no-brainer. I had talks with the head of the theater program, Victoria Bussert. I am extremely grateful for my time at BW. Without BW, I would not be where I am today,” he said emphatically. “It’s kind of like all the cards fell into place perfectly. I went there for college, showcased in New York City, and then right away did callbacks for this tour! I’m very grateful for BW. It’s an amazing school and an amazing theater program. I wouldn’t have had it any other way.”

“When I was deciding to go to college for musical theater, I wanted a program that not only taught the craft of singing, acting, and dancing but also emphasized the business aspect. At the end of the day, it’s a business. I know some programs do a great job of exploring the art form but don’t teach the business aspect. I’ve always been interested in the business side of the entertainment industry so I minored in Arts Management because I really wanted to explore that,” Price continued. “Victoria Bussert, from day one, was very supportive of my decision. She introduced me to a bunch of casting directors through the Master Class series we have in the theater program. One of the first things she taught me was how important the business and networking aspect is. She played such an incredible role as a mother-like figure that has some of the most incredible tough love in the world. I truly grew so much from learning from her. I just could talk about it for hours, because she’s just wonderful and she’s developed this program into a powerhouse program that really builds performers that are ready to perform professionally and navigate this industry. It’s a testament to her because so many BW grads go on to work in the industry. I would be nowhere without her and the energy she has put into the program. It’s just been incredible.“

Much like recent CleveRock interview subject Warren Egypt Franklin (a fellow BW graduate who is currently at Playhouse Square performing in Hamilton), Price landed a coveted role shortly after graduating. He’s excited to be back in Cleveland, performing in front of his Northeast Ohio friends so soon!

“I graduated in May of 2022, so I’m literally coming back home,” he said. “I was there six months ago. I’m very excited because one of the people I went to college with just happened to be someone I grew up doing theater with. To come back and hang out with him again is amazing. To be able to perform in the historic Playhouse Square in front of my college friends and all of the faculty, and I am doing what they taught me to do.”

The life of an understudy can be a bit nerve-wracking, requiring an actor/actress to be ready to perform a role, sometimes unexpectedly and at a moment’s notice.

“I think one of the most amazing things about this production specifically is the amount of attention that the understudies and swing have gotten from our creatives,” he said. “There is a special feeling knowing that the entire creative team has a stake in you to be able to play this role. As someone who just graduated college, it’s very rewarding but also a huge responsibility to understudy the titular character. After I get off the off phone with you, I’m heading right to an understudy rehearsal. I think the most important thing is staying as ready as possible and having the confidence in myself that I’ve put in the work, I know what I’m doing. If a mistake happens, I’ll get a note about it and I’ll fix it for the next time. I just don’t get too stuck in my head. I feel sometimes I am just stuck in a mental space in my head. Knowing that I have so much support from everyone in the building is amazing. We actually had an understudy and swing go on in San Francisco recently. Everyone is so incredible and I’m so excited for the day I get to go on.“

Price did a wonderful job of doing an unrehearsed plug for the show to wrap up the interview:

“I want everyone to come to see Beetlejuice! We’ll be here at the Connor Palace from January 10th through the 29th. Come and have a fun time,” he encouraged Clevelanders. “It’s one of those musicals that you get to sit back, relax, leave your troubles at the door, and have a fun night of theater. I’m so excited for Cleveland audiences to see this show. There is something so special about this musical. I’m so excited for this show to continue on tour as it closes on Broadway. Come out and see the show!”