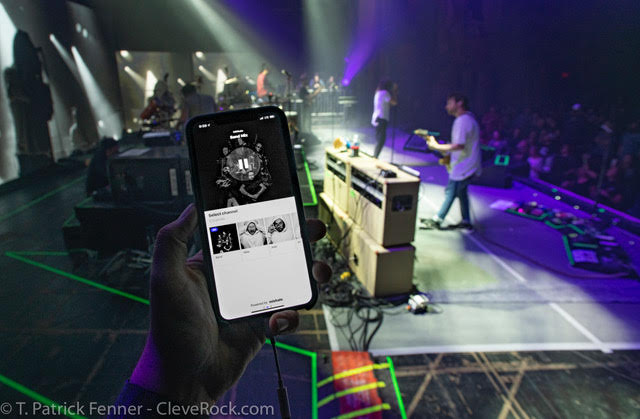 Mixhalo is delivering a new technology that may be the solution to many concertgoers’ problems. While it may not prevent middle-aged white chicks from spilling beer on your shoes, silence the past-his-prime man screaming “FREEBIRD,” stop the sea of people obstructing others’ views while trying to capture that “perfect” video from 100 feet away, and certainly won’t solve the traffic nightmare when leaving Blossom Music Center; Mixhalo WILL solve a more universal issue: Sound.

Maybe “solve” isn’t the right word. “Revolutionize” may be a more accurate term.

Mixhalo allows fans to experience the same audio that the band hears in their In-Ear Monitors (you know, those things they wear in their ears onstage) or the direct mix from the soundboard without having to deal with delays, crowd noise, or volume issues.

The idea was conceived by Mike Einziger, guitarist for multi-platinum selling group Incubus. While hanging around Harvard, Einziger was queried on the biggest tech issue facing artists and the concert experience in general. Einziger concluded that there was a big need for the technology that would become Mixhalo, setting the wheels in motion.

A chat with the CEO

Prior to the opportunity to demo Mixhalo’s technology, I was able to talk to the company’s CEO, Marc Ruxin by phone to discuss the concept and the geeky details of how the technology functions.

A Cleveland native (now California transplant), Ruxin knows the ins and outs of the Cleveland music scene, venues, and the need for an enhanced concert-going experience.

“I’m a super music nerd, as most Cleveland people are known to be. When I was a kid, I would sit in my room and listen to records all day because the weather was lousy all of the time and it sucked to go outside,” Ruxin said with a laugh.

Ruxin, who took the reins as CEO in January 2019, described in greater detail how Einzinger conceived the idea:

“He had this epiphany that he had been wearing In-Ear Monitors for 18 years. He had gone to Harvard kind of late in his career and started hanging out with a bunch of tech guys. As I always say, in Noe Valley, tech CEOs are rock stars, but tech CEOs still think rock stars are rock stars!”

He continued, “He [Einziger] was hanging out with the guy that runs Dropbox and other big investor types. They were asking him, ‘What’s it like to play for 50,000 people?’

He would reply something like, ‘What’s it like to be a billionaire running a 10 billion dollar company?’

Mike was asked, ‘What’s the one thing that the music business needs from a technology perspective?'”

THIS, is where Einziger came up with the Mixhalo concept! He wanted to deliver the best sound experience to ALL fans; especially the ones with budget tickets.

Summing up Einziger’s thoughts, Ruxin paraphrased, “‘I’ve been wearing this In-Ear Monitors for almost 20 years and I get the good sound. The fans in the cheap seats get the bad sound. Wouldn’t it be cool if I could give what I hear to my fans?'”

Ruxin continued, “We built this platform that effectively allows anybody at a live event to stream the soundboard from any place in the venue, using their own headphones, not having to be dependent on venue wifi. That’s what Mixhalo is.”

Checks started coming in from “rockstar” tech investors and world-renowned touring rockstars, including Metallica and Pharrell Williams. Having top-name musicians tied to the project certainly doesn’t hurt from a public relations standpoint.

So, how is Mixhalo deployed? What are the geeky details behind the system? Marc did a fantastic job of giving a hybrid techie/layperson lingo response:

“We basically triangulate a server that you hook into the soundboard. It could be anything from a laptop to a Roku style box or whatever the venue operator wants; a MacBook Air even is an option. We put our software there. We hang these wireless antennas around the venue. You can imagine Wi-Fi enabled radio antennas. We place them around the venue and we then triangulate based on where you are. Your phone talks to one of these access points, and we’ll delay the sound based on where you are,” Ruxin says.

“So, just picture a triangle that goes from the soundboard to the access points to the Wi-Fi chip in your phone to identify the network. It will say ‘Logon to Mixhalo.’ After that, we turn Wi-Fi into radio. It doesn’t matter if there are two or two million people listening to a radio station, the broadcast is the same. We have internet access points for 35 or 40 people that can be on an access point before the internet gets too slow. The first person on the network is fast, and by number 30, you need to go to a different access point,” he continued.

Speaking specifically on the Mixhalo setup:

“All you need is to be near an access point, so we can have 2,000-3,000 people in the proximity. I’m picturing Blossom Music Center and you’re going to the lawn there; we basically find where you are in the field and then there are delay towers. Most of those AV systems at any live event system will have a delay anyway. The sound that comes out of the speaker on the lawn will be different than the speaker in the front row. We come to where you are… It’s really hard networking technology more than anything else, it’s triangulating geography to proximity,” Ruxin explained.

Confused? Ruxin tried to clear things up by drawing a parallel to television viewing and also make the case for the top benefits of Mixhalo:

Already having powerhouses like Metallica, Pharell Williams, and Aerosmith, along with venue mecca, The Staples Center in Los Angeles, Ruxin has even bigger plans.

“We would love for every venue on the planet to have Mixhalo deployed in it, he said. ” For every band that wants to use this experience like Incubus or Metallica, you can actually just take a tech on the road. It’s very easy to set up. It’s easy for fans to use. ”

But Mixhalo, according to Ruxin, can be far bigger than concerts! Sports arenas are already involved. Theater, anyone? The sky is the limit!

“We are now branding into sports. I grew up going to Indians games with a father who used to bring a transistor radio to the games to listen to play-by-play,” Ruxin recalled.

(*SIDE NOTE: How freaking cool would it be to get Tom Hamilton’s play-by-play calls without having to lug a radio to the game!*)

“When I first heard about Mixhalo, I was like, ‘What about sports?’ For baseball, it’s 11 minutes of action for three hours to unfold, there’s really no context. Any live event, be it a Broadway show, a concert, a sporting event, we allow fans, if the venue is enabled or the band takes it on tour to stream the board to their own phone and own headphones.”

After hearing all about the technology from Ruxin, I was chomping at the bit to try the technology out for myself and see if it is as good as it sounds (no pun intended)….

I was incredibly excited to give this technology a whirl! Having graciously been comped this experience by the Mixhalo team in conjunction with Incubus’ production managers, I missed out on a confirmation email with instructions on how to prepare (although I learned no preparation was actually needed) or what to expect. Always one to be prepared, I brought my own headphones to the show. After a difficult deliberation, I settled on a pair of Audio Technica ATH-E50. (Middle of the road; yet professional enough for my anticipated needs.)

Upon arrival, I simply had to download the MixHalo app from the APP store (no additional cost to the user). There is no need to download the app prior to arrival (although it is an option). The app features are controlled and limited; the only option a user has outside of a venue setting (as of now) is to rate the app.