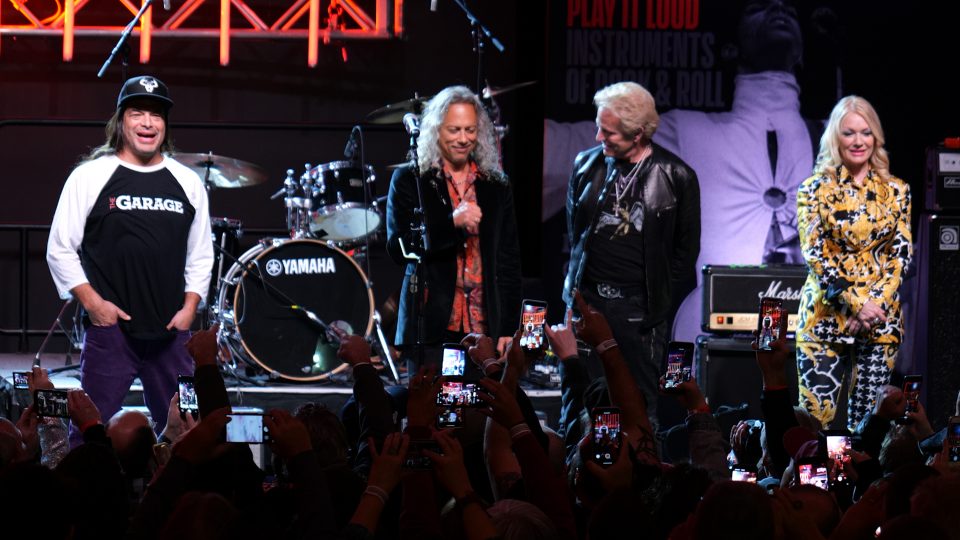 Over 1,000 fans, four Rock & Roll Hall of Fame inductees, and the largest collection of the world’s most famous and coveted instruments used to create rock-and-roll history …Not your typical Thursday in Cleveland!

Once again, the Rock & Roll Hall of Fame is set to impress. Play It Loud: The Instruments of Rock & Roll has come to Cleveland! The exhibited was previously housed at New York’s famed Metropolitan Museum of Art.

The latest exhibit at the Rock Hall is now the largest in the museum’s history, taking up four full floors. The collection spans some of rock-and-roll’s most prized instruments, dating back as early as 1939 through present today.

In lieu of a traditional ribbon-cutting ceremony, the Rock Hall did, in fact, ‘Play It Loud,’ with four hall of famers to help open the exhibit. Don Felder (formerly of The Eagles), Nancy Wilson (of Heart), along with Metallica members Kirk Hammett and Rob Trujillo were all in the house to speak to the first lucky fans to tour the exhibit, and Felder along with the Metallica members also performed!

Rock & Roll Hall of Fame CEO Greg Harris explained to CleveRock, “This exhibit takes some of the most iconic instruments in the history of rock-and-roll that were used to record some of the most iconic songs and it assembles them all in one place, for this one time only. Chuck Berry’s guitar; every single guitar player, when you learn how to play, you learn how to play ‘Johnny B. Goode.’ That is the guitar that Chuck Berry recorded ‘Johnny B. Goode’ with.”


This exhibit is special. Play it Loud is not just a collection of these amazing musicians’ guitars. The guitars and instruments are special. Each one of them was hand-selected for their unique reason.

CleveRock had a chance to chat with Felder, where he shared his history about his iconic guitar on display in the exhibited. Felder explained: “When I put together the music for ‘Hotel California’ as a demo and on the record, I play a 12-string acoustic for the opening of it. And then I had to play these electric lead guitar parts. I couldn’t figure out how, when we went out on the soundstage on the ‘Hotel California’ tour, I was going to play both of those parts.” He goes on to explain that he needed two guitars in one, thus deciding to use a double-neck guitar.

Speaking of double guitars, CleveRock was also excited to see Kirk Hammett and Rob Trujillo stop by as well. Hammett goes on to tell us how he contributed his black guitar from when he was writing and touring Metallica’s ‘Black Album‘ and ‘Load.’ This one was of the first guitars that he was able to design, something that he has done ever since.

When asked what instrument he was must excited to see of the Play it Loud exhibit he replied, “Seeing Stevie Ray Vaughan’s guitar was number one was, oh my god it was epic for me; I mean, completely overwhelming.” He went on to say how excited he was to see John Paul Jones’ piano in which he played “Stairway to Heaven.”

Nancy Wilson was the fourth and most excited inductee of the evening. She contributed her iconic Ovation acoustic guitar that has been on display longer than she had a chance to play it. She was most excited about seeing all the guitars from other musicians. Wilson said, “David Gilmour’s black Strat, it’s just…I’m not going to get over it too soon!”

The evening ended with performances of “Hotel California,” performed by Felder (the song’s author) and a Metallica medley by Hammett and Trujillo. The 1000+ fans who were waiting outside the Rock Hall’s other new exhibit, The Garage, just for a glimpse at their heroes, were now front and center, and watching this mini concert.

The Rock & Roll Hall of Fame has extended hours during the holiday season. However, if you don’t get a chance to stop by before the end of the year, not to worry! Play it Loud: The Instruments of Rock & Roll will be here in Cleveland through the summer. The exhibit is now open and is included with museum admission.

More information can be found at RockHall.com