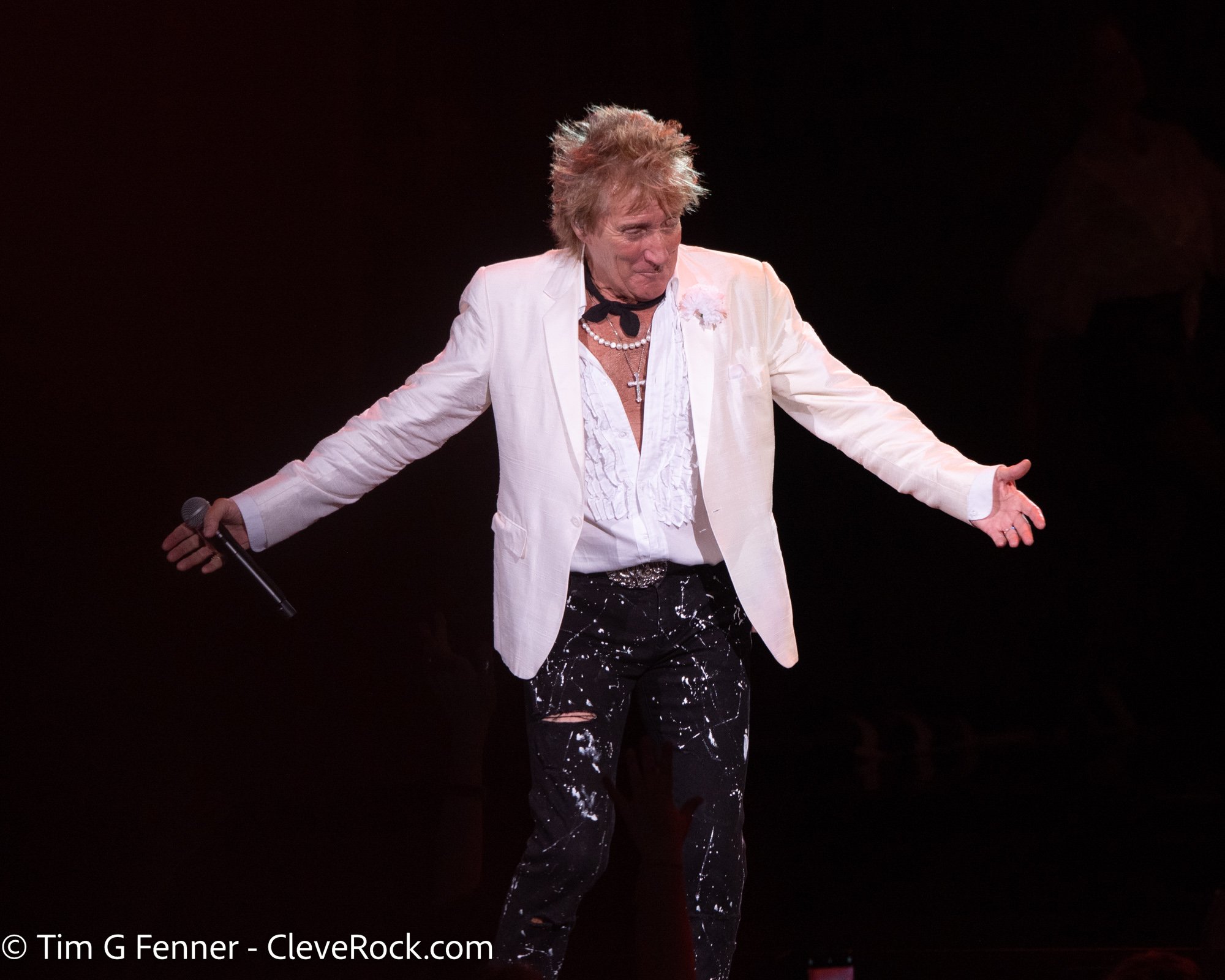 The first time I saw Sir Roderick David Stewart was at a World Series of Rock concert at the old Cleveland Municipal Stadium in August of 1975 where Stewart was the headliner. This show had four opening acts, all of which sounded quite bad (through no fault of the performers). Many things might have been afoul, including terrible acoustics of that huge concrete bowl and poor mixing and/or sound systems using 1970s technology. After the last opener and a long delay, an all-white stage lit up, orchestra flanked in the rear, and Stewart came out and sounded truly amazing. His vocals were crystal clear, as were the band and orchestra. Stewart’s production folks figured it out and helped him put on an amazingly entertaining show.

Tonight, history repeated itself with a muddied sound start for the opening act, Cheap Trick (which, in all fairness, was fixed by the set’s end), with Stewart’s production being near flawless.

Stewart had a very complex production with many players on the stage including dancers and singers (some of which were former Broadway performers), a full band including saxophone, guitar, bass guitar (electric and stand-up) two violins, harp, set drums (two set drums on occasion), percussionist, keyboard and several backing vocalists. All these performers were amazingly coordinated, many moving all over the stage, and not randomly, but well-coordinated (except for maybe Stewart who tends to still run around the stage, even at 77 years young).

The huge screen behind the stage was, for the most part, enhancing the show without overtaking the attention from what was happening onstage. Above the stage was a semi-circle of monitors that depicted many parts of the stage so even the crowd on the lawn could see the production. During a percussion solo, performers were all over the stage and the video production team did an outstanding job of jumping back and forth, following the amazing call and response among the percussionists. The audio and lighting were superb.

Stewart’s set was cover-heavy (13 tunes from his 22-song set, to be exact). Many of the songs performed tonight by Stewart are likely mistakenly attributed to his writing credit by the majority of the audience, given the prominence the tunes acquired after Rod recorded them.

He opened with the memorable Robert Palmer song “Addicted to Love,” flanked by lovely ladies dressed and made up in the same way they appeared in Palmer’s MTV video.

Dressed in a white long sleeve shirt, he donned a white jacket for the first two songs before the 85-degree temperature and humid air called for its removal. He rolled up his sleeves and opened a few buttons in traditional Stewart fashion. He also had two more outfit changes while the huge pack of backup performers entertained in the interim. During the outfit changes the band performed “Call Me” (Blondie cover)and “Hot Stuff” (Donna Summer cover) sans-Stewart. The theme of the show had a Celtic flair with several traditional songs.

In addition, Stewart played a selection of many of his most popular singles including “Ooh La La” (a song by his former band, Faces), “Young Turks,” “Do Ya Think I’m Sexy? “Tonight’s the Night,” “Forever Young” (Including a Celtic band solo featuring two amazing lady violin players) among a handful of others.

Notable covers played include a soulful version of “I’d Rather Go Blind” (Etta James), which he did an amazing job on, and the Creedence Clearwater Revival classic, “Have You Ever Seen the Rain?”

During the acoustic session, the band moved to the edge of the stage and some, including Stewart, sat on chairs. Sitting down didn’t stop Stewart from dancing; the guy’s got moves from a sitting position, too!

This acoustic portion of the show is the only time the crowd took a seat (and, only at the request of Stewart himself). It was a more intimate part of the show, but not any less inclusive. The fans sang along, just as they did for the entirety of his performance. Even the younger fans were well versed with the words of each song.

The show continued with one of his biggest hits, “You’re In My Heart” and another cover, Van Morrison’s “Have I Told You Lately” (often mistakenly attributed to Rod). Stewart has performed many covers during his long career and has released several cover albums in his ‘American Songbook’ series.

After closing his set with “Hot Legs,” Stewart made his way back to the stage for a one-song encore, “Stay With Me,” (a popular Faces tune).

Call him by any name you want, “Rod the Mod” (his nickname earned in the ‘60s), “Rod the Bod” (a name bestowed upon him in his younger days for that sex appeal that drove the ladies crazy), or Sir Rod Stewart, this stage legend showcased why he earned not one, but two inductions into the Rock and Roll Hall of Fame (2006 as a solo artist and again in 2012 as a member of Faces). He also showed why he was deserving of his 2005 Grammy Award, UK Music Hall of Fame induction, and his star on the Hollywood Walk of Fame.

Fellow Rock and Roll Hall of Famers Cheap Trick kicked took the stage before giving way to Stewart. Since their humble beginning in 1973, these guys have never strayed from their vicious and diverse rock and roll genre.

Cheap Trick’s most recent album, ‘In Another World,’ was released in April of 2021, but tonight’s show included a lot of their big hit classics like “I Want You to Want Me.” This song reached the top 10 in the US in 1979 and may be considered their biggest crossover song to mainstream listeners, exposing the band to an entirely new fan base.

Oh, and by the way guitarist Rick Neilsen (who was incredibly rude to CleveRock in a 2016 interview, but we won’t hold that against him), still sounds amazing, and his crazy five-neck guitar did make an appearance near the end of the show. The only negative comment I might make about tonight’s Cheap Trick show was the sound quality. The first half of the show was bass-heavy and muddied much of the band (even the vocals). Fortunately, this issue seemed to get corrected as the show progressed.

Tonight’s performance from two legendary acts with an unlimited supply of hits was a treat, to say the least. I have to say, I was particularly thrilled to see Rod Stewart again after my 47-year hiatus. He looks great, sounds great, and even still moves pretty well. His show was very interactive with the crowd, filled with show choreography and sound quality. Blossom was a very fun place to be. Hopefully, Rod stays “Forever Young,” (enough) to keep coming to town in the years to come!