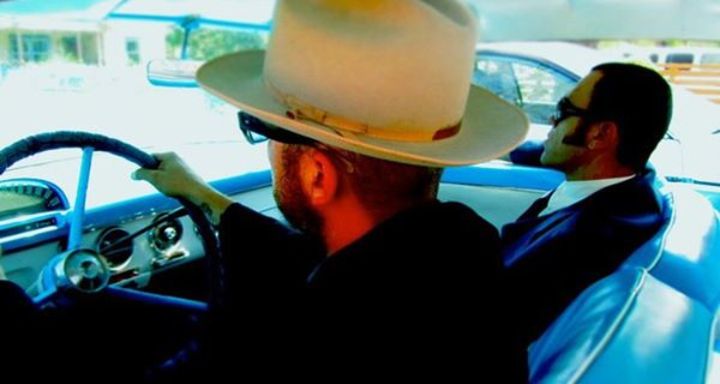 Andrew Trube, who, along with partner in crime Anthony Farrell make up the hard to classify duo, Greyhounds, will roll into Cleveland with City and Colour on January 28. (If you didn’t snag tickets to the SOLD OUT show, they will be back for a headlining gig at Beachland Tavern on March 2.)

The Greyhounds are both road and studio warriors. After some sixteen years of making music together, the duo signed their first record deal with Ardent Records and released ‘Accumulator’ in 2015, which features songs that span their 1.5+ decade career.

Phoning in from New Orleans on January 18, just hours before taking the stage at House of Blues, Trube tells the story of how the album came to fruition.

“There are songs from the past 16 years. We had to widdle it down to 13. We’re always writing music constantly,” explains Andrew. “With ‘Accumulator,’ they wanted to share the story of where we came from and where we are at and kind of explain our musical history through that record. That’s where we came up with the name ‘Accumulator,’ it’s an accumulation of everything that we have up until now.

The music on ‘Accumulator’ is somewhat of an eclectic mix. It’s impossible to pigeonhole Greyhounds into one genre.

“It’s a little bit of  of everything,” Andrew says.  “We’re influenced by jazz, soul; blues. There is also a hip-hop element, definitely. Anthony is from the West Coast and there is definitely a lot of that out there. A lot of that West Coast soul. I kind of bring in more of the Texas kind of twang thing. It’s just a culmination of a lot of influences. We love so many different kinds of music that when we write a tune or record a tune, we’re just influenced by all kinds of things. It’s hard to explain exactly what we do, but it’s definitely soul, jazz, and blues based. However that comes in it’s our own weird whatever we’re doing. Then there’s definitely a little bit of boogie in there. We like it when it grooves.”

The duo draws from a variety of influences. Most 11 year-olds listen either to radio hits or classic rock albums from their parents collection. Andrew was into something different.

I decided at the age of 11 that I wanted to play music. At the time, I wanted to play blues,” he says. “BB King is a huge influence to me. He’s the reason I picked up a guitar. I was in New Orleans, in the French Quarter, and I heard this music playing. I went to this stand and this guy was selling cassette tapes and I bought a cassette tape and listened to it all the way back to Tyler, Texas.”

Even before releasing ‘Accumulator,’ Andrew and Anthony had been busy working on some new tunes. Those songs will see a proper release on ‘Change of Pace,’ which is due out April 1 on Ardent.

“They are all tunes from the past couple of years and we are really proud of it. It sounds really good; better than we expected,” said Trube. “We are really excited about that release. The majority of it was recorded at our studio in Austin. Whenever we tour, we usually take two days off to record, wherever we are. Because of that, some of it was done in Memphis and Atlanta. The majority of stuff was recorded to four track tape. Anthony and I worked really hard on this one, so we’re excited about the release.

In between the release of ‘Accumulator,’ and the forthcoming ‘Change of Pace,’ Greyhounds put out a live record, ‘Heave on Earth.’ The vibes of a live record, in this writer’s opinion, better capture the essence of Greyhounds.

“They are two different beasts. Until we’re selling out stadiums or theaters, we gotta go work with what we got. The live, man, is as raw as it’s going to get with us,” Trube said. “The studio is a chance for us to really experiment with songwriting and sound. Anthony and I produce all of our own stuff. We work with a great engineer in Austin out of this house we record at all the time. We like to have curve balls on the live show, because you can listen to the record at home, but when you come see us live we’re going to do the tunes special to that night. We’ve always kept it really loose. That’s more of the jazz side to us. We play to the crowd, the audience, the place, we try not to get on a regular schedule. We like to mix things up.”

And for those coming out to their set opening for City and Colour or to their headlining gig at the Beachland, what can one expect?